Get out the birthday cakes and lots and lots of candles. This year we sing "Happy 70th Birthday" to a favorite cartoon character - Bugs Bunny, that sassy, wise-cracking, carrot-munching rabbit with a Brooklyn accent. Warner Brothers studio's biggest cartoon star and its answer to Disneys Mickey Mouse, Bugs headlined a seemingly endless string of successful cartoon shorts from 1940 to 1963. He even won himself an Oscar for "Knightly Knight Bugs," in 1958.
His origins go back to 1938. It was then that a crazy rabbit was cast in "Porky's Hare Hunt," and later in several other films that year and the next. But it wasnt until the 1940s film, "A Wild Hare," that the real Bugs Bunny, name and all, emerged in final form. Also, in that film, Bugs uttered his now famous question, "What's up, Doc?"
Warner distributed the cartoons of Bugs and his companions, Daffy Duck, Pepe le Pew, Porky Pig, and Sylvester and Tweetie Pie, under the banner of their "Looney Tunes" and "Merrie Melodies" production lines.
Bugs, voiced by Mel Blanc, was a resourceful rabbit with a very strong personality. He strode across the screen forcefully and in complete control of himself, always confident that whatever he did was right and that he, Bugs, was a very special "person" that the entire world should acknowledge. Throughout the films he battled with Elmer Fudd, Yosemite Sam, and most of all, Daffy Duck. Almost always he came out on top which was, after all, the American Way.
The nationwide popularity of the crazy, mad-hatter rabbit soon spilled over into comic books and comic strip pages, as well as toys, books, records, bubble bath, and school lunch boxes. Figurines by Shaw & Company of the 1940s are now worth over $100 each and a Bugs Bunny metal bank, circa 1950, was recently pegged at $300 by an auctioneer.
Collectibles of the last half-century also include many, many coloring books, action figure premiums from fast food restaurants, children's clothing, table lamps, plastic figures by such manufacturers as Dakin in the 1970s, jig saw puzzles, and a lengthy line of greeting cards by Hallmark. There have even been soft plush Bugs Bunny dolls - one of the hare holding a rabbit, originally sold in the 1950s, recently sold for nearly $200. The 1996 part animation, part live motion picture, "Space Jam," also generated a goodly amount of playthings, such as a plastic action toy of Bugs dunking a basketball into the basket.
Sometime in the 1960s or early 1970s, a cereal maker, probably Kellogg's, began printing "Bugs Bunny Fun Post Cards" on the back of its packages. Featured were many of the Looney Tune characters.
In 1977 the Golden Press childrens book line of Western Publishing Company sold a "Golden Book of Picture Postcards, Bugs Bunny" for 95¢. This book had 12 different color postcards for young people to tear out and send to friends. Most were related to various holidays.
"The Bugs Bunny Show" premiered on national television (ABC Network) in October of 1960. Using the large inventory of theatrical cartoons of not only Bugs but all the other Looney Tunes stable, the series ran until 1962, when it was bumped down into Saturday morning. There it stayed for many years.
Within the last couple of decades, diehard fans have been treated to several original TV specials in prime time spots, as well as a feature length film combining both animation and live characters. From the ratings Bugs and the gang have garnered, it appears that he'll be around for quite a while longer.
Today, collectors search earnestly for the many different promotional black-and-white stills from all of these shows that were sent by the network to local newspapers for use on their television pages.
Even United States Postal Service honored the rabbit with a commemorative stamp in 1997. It showed him, with carrot in hand, standing next to a mailbox.
Bugs Bunny is a good topic for collectors interested in cartoon history and American animation history. Current values for the various memorabilia associated with him is generally still less than for comparable Disney collectibles. The supply is still abundant and since Bugs continues to be popular with young and old alike, the outpouring of ephemera, toys, souvenirs, books, and novelties will go on endlessly. 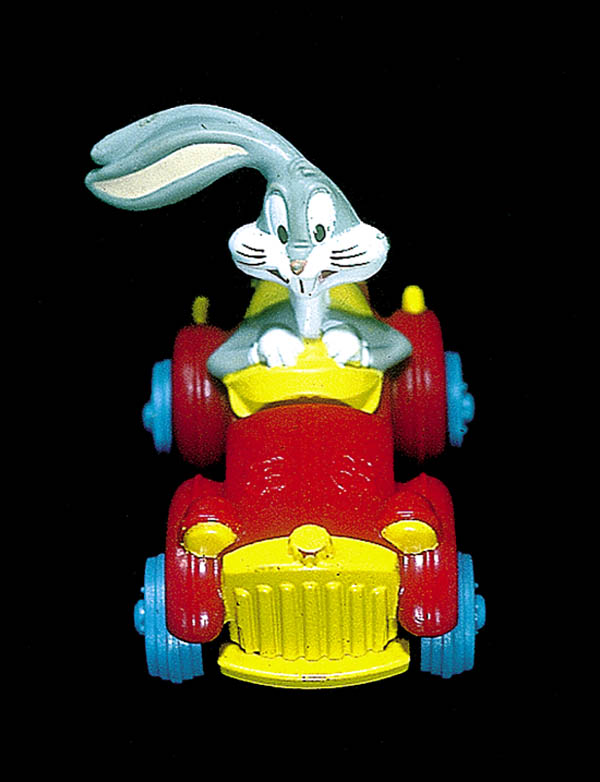