The results of RSL Auctions recent sale at Richard Opfers auction gallery in suburban Baltimore, Maryland, proved that interest in mechanical and still banks is as strong as ever. These colorful wonders have proved to be a sound (and fun) investment. Says co-owner of RSL, Ray Haradin of the fast-paced sale at Opfers, "We started at noon and finished at twenty till three  it was about two hours and forty minutes of very serious bidding." In all, the auction took in $1.8 million. (All prices reported here include a 21.5% buyers premium.)
The featured attraction of the 360-lot sale was the Richard C. Stevens collection, a 24-year assemblage of cast-iron mechanical banks boasting superb conditions and with provenance reflecting several of the most prestigious collections of the past half-century. Throughout the energetic sale, conducted by Rick Opfer, many auction records were broken.
The top lot of the day was a circa-1905 J. & E. Stevens Calamity bank with rare chocolate-brown base. When activated, the football-theme cast-iron bank depicts two Yale players tackling a running fullback from Harvard. In near-mint-plus condition with original box, the bank scored a mighty auction price at $78,975.
One of the rarest mechanical banks offered was a circa-1930 Kilgore Mfg. Co. Turtle bank. One of only nine examples known, the near-mint cast-iron amphibian could boast a background that included tenure in the Covert and Gertrude Hegarty, Stan Sax, and Dick Stevens collections. It finished near the top of its estimate range at $72,900.
Other highlights included: the wonderful Chief Big Moon bank, depicting a Native American chief sitting at the entrance to his teepee and facing a large frog and swan pond. It sold for a record-setting $41,310. A circa-1895 Butting Ram/Man Thumbs Nose, brought $27,945; and a white, circa-1880 J. & E. Stevens Owl Turns Head bank, went for $23,085. A double-chimney, circa-1873 J. & E. Stevens "Novelty" building bank drew heated competition because of its rare color combination of seafoam green, cream, tan and red. The bank was bid to nearly twice its high estimate, closing at a record auction price of $29,160. Haradin relates the background of the latter bank, saying: "It was found about 15 years ago and came directly from the attic of a farmhouse not far from the Stevens factory in Cromwell, Connecticut. It was the first one ever to turn up in this extraordinary color combination, and to my knowledge, it is the only one known."
More information is available from RSL Auctions. Visit the company website at www.rslauctions.com. Phone Ray Haradin at (412) 343-8733, Leon Weiss at (917) 991-7352, or Steven Weiss at (212) 729-0011. Send e-mails to: raytoys@aol.com or geminitoys@earthlink.net. 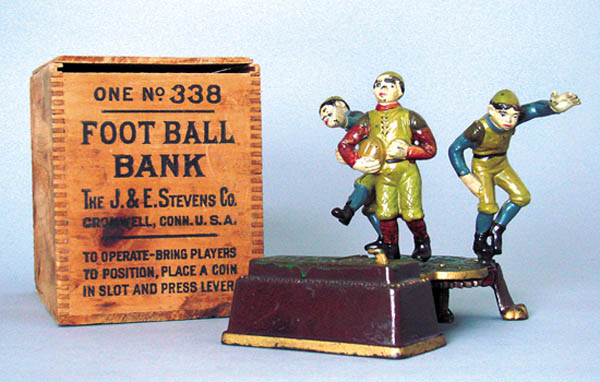