A Brief History Of The Passenger Pigeon Comes To Auction

On Thursday, Dec. 12, at its Fine and Decorative Arts Auction, Alderfer Auctions will offer to the highest bidder a display case containing various items used to trap pigeons in the mid-19th century, items such as a whistle, cord and other tools to make nets to trap pigeons. The pigeons that were being trapped were not the pigeons that get fed in a park but the passenger pigeon, a migratory pigeon indigenous to North America that numbered in the billions in the 19th century. This bird became a cheap and readily available source of food that could be shipped from the countryside to growing urban centers. In the 19th century, the trapping/hunting of these birds was commercialized to meet demand. As most people know, under extreme pressure on the species as well as deforestation of the pigeons breeding and nesting grounds, their population numbers plummeted to extinction. The last known surviving passenger pigeon died on Sept. 1, 1914.
Many of the items in the case belonged to Jacob Weisel (1802-84), a pigeon/trapper that lived in north Williamsport, Pa. Documentation states that many of these items were used in the 1850s. The items themselves were collected by Charles H. Eldon (1852-1930), a taxidermist from Williamsport. Eldon mounted these items for display and presented them to Henry Wharton Shoemaker (1880-1958) several years after the last passenger pigeon had died. Shoemaker was a Pennsylvania renaissance man who excelled as a writer, folklorist, historian, diplomat, and soldier. Shoemaker espoused Teddy Roosevelts theories on conservation and was well known in his own right for supporting various conservation initiatives in Pennsylvania.
The 19th-century framed grouping of pigeon capture relics will be sold during Alderfers sale held live and online. Alderfers is located at 501 Fairgrounds Road, Hatfield, Pa.
For further information or to view the catalog, visit www.alderferauction.com. 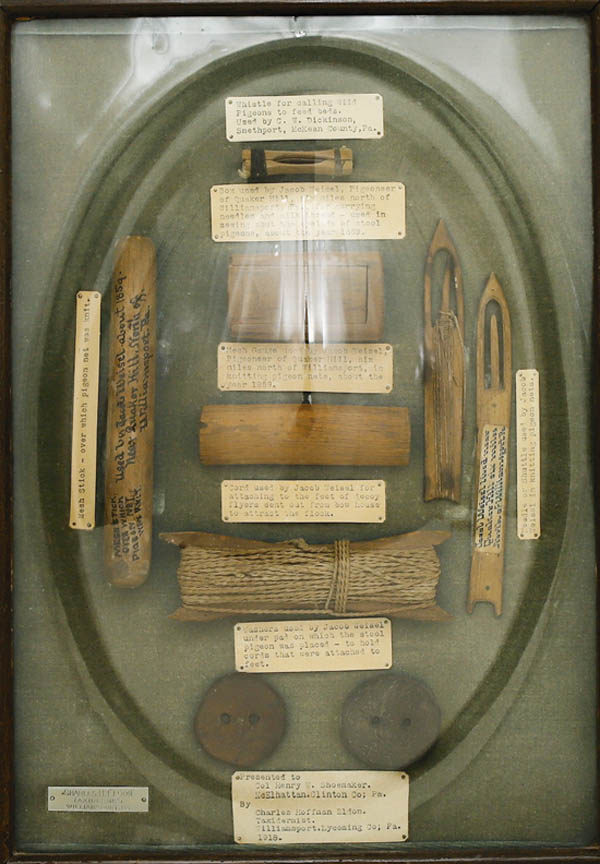