A Gift To The Nation: The Joseph And June Hennage Collection

Among the approximately 50 objects that will be featured in A Gift to the Nation: The Joseph and June Hennage Collection, which are among the more than 400 exceptional examples of American decorative arts in the collection that was bequeathed to The Colonial Williamsburg Foundation in 2020, there are several objects that deserve special notice. The following are a few of these examples.
Furniture
The Hennages often acquired objects that illustrated the variety of options available to local consumers of the period. Wealthy Philadelphians could add optional elements or ornament to a basic furniture form based on their taste or the size of their pocketbook. A simple tea table might have a round top, uncarved pillar and legs, and pad feet. This Philadelphia example from ca. 1770, which descended in the family of William Dunn, who founded Dunnstown, Pa., has the most expensive shaped and carved top, known in the period as scalloped, and an extraordinary amount of rococo carving on its legs ending in ball and claw feet. The rare columnar-shaped pillar is carved with flutes. Philadelphia cabinet shops often had specialist carvers execute these detailed embellishments. One carver, who likely produced the carving on this table, is identified only by his work and is known today as the Garvan Carver.
Regionally specific furniture forms particularly appealed to Joe and June Hennage. Known today as bombé furniture, American versions of the curvaceous forms inspired by British and French precedents were almost exclusively produced in the coastal Massachusetts cities of Boston, Salem and Marblehead. This mahogany and white pine bombé chest of drawers made in Boston, ca. 1770, exemplified a specific geographic aesthetic that differs from Philadelphia and New York examples in its focus on form rather than applied ornament. While the drawer sides of this example follow the shape of the cases sides, other makers of bombé chests chose to have vertical drawer sides, leaving the inner case sides vertical instead of following the curved exterior.
Silver
With its ample proportions, shell and scroll feet with prominent junctures and free-standing handle, the sauce boat fashioned by Samuel Burt, ca. 1750, embodies the full-blown rococo style in silver from Boston, Mass. Although a masterful craftsman, few pieces made by Burt survive due to his untimely death at the age of 31. Approximately three dozen objects are known today by him, including large and complex forms such as flagons, tankards, and teapots. Silver bearing the mark of Samuel Burt is noted for its balance, scale and substantial weight. Like his two younger brothers, William and Benjamin, Samuel followed his father John into the silversmithing trade; together, they created one of the best-known dynasties of the craft in New England.
Ceramics
The five-piece garniture made of hard-paste porcelain in Jingdezhen, China, ca. 1785, graced the parlor fireplace mantel at Joe and June Hennages Williamsburg home for many years. It was a gift from Joe to June and was among their early porcelain acquisitions. The decoration, often referred to as the tobacco leaf or pseudo-tobacco leaf pattern by modern-day collectors, is most likely derived from flowers and foliage in Southeast Asia or the Pacific. The pattern was particularly popular in late 18th-century and early 19th-century America. Archaeological evidence and intact survivals with histories of ownership reveal the pattern was owned in Virginia, Maryland and South Carolina.
The small hard-paste porcelain dish, also made in China around the same time period, is from the first service bearing the insignia of the Society of the Cincinnati. June Hennage saw this dish advertised in The Magazine Antiques by legendary Chinese porcelain dealer Elinor Gordon and subsequently purchased it as a special surprise for Joe. The service was ordered by Supercargo Samuel Shaw on his inaugural voyage to Canton in 1784, marking the young United States entry into direct trade with China following the American Revolution. Henry Light Horse Harry Lee eventually purchased the service for George Washington, who served as the Society of the Cincinnatis first president.
Furniture Miniatures
Collectors have long been interested in miniatures: small-scale pieces replicating the same styles, proportions and construction techniques seen in their larger cousins. Miniature furniture was a specific love of June Hennages. It is unknown whether these pieces were intended for display by makers or adult owners or for play by children. The tradition of large-scale furnished dollhouses or cabinet houses for wealthy adults in 17th- and 18th-century Europe may have influenced the production of these slightly larger American examples suggesting that some level of both display and play were intended. This miniature blockfront chest of drawers made in Boston, Mass., between 1750 and 1775 of mahogany and white pine is typical of Boston blockfronts and has the same large dovetail-shaped joint between the base molding and bottom board. This construction detail helps to distinguish pieces made in Boston from those of Newport, R.I., even in a miniature example.
These selected objects are but a few of the exemplary objects that will be on view in A Gift to the Nation: The Joseph and June Hennage Collection, which opened June 26 in the Miodrag and Elizabeth Ridgely Blagojevich Gallery at the DeWitt Wallace Decorative Arts Museum, one of the recently expanded Art Museums of Colonial Williamsburg. The exhibition will remain on view until 2023.
Additional information about the Art Museums and Colonial Williamsburg as well as tickets are available online at www.colonialwilliamsburg.org or by calling 855-296-6627. 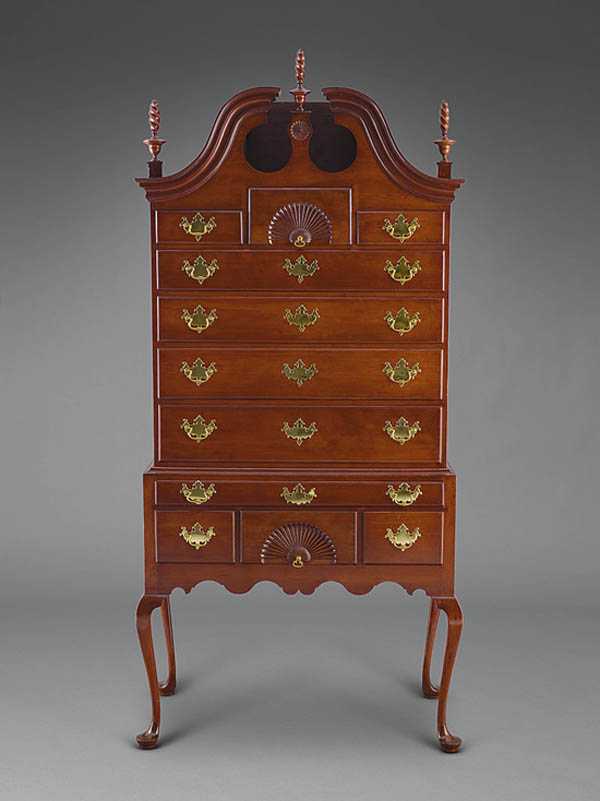