A Small Glimpse Into The World Of Dr. Seuss

If you are ever in Springfield, Mass., take some time to go to the Springfield Museum, located downtown. Keep in mind that Springfield is a very historic city, having been smack in the middle of Revolutionary War events. So you would expect that exhibits in the museum would naturally be related to the Revolution or Colonial America. Sure, it is discussed, but the main displays are for one the towns most famous residents, Ted Geisel, and from the 20th century.
Yes, Ted Geisel was born in Springfield in 1904. We know him as Dr. Seuss. Although he never had children of his own, Geisel sparked the imagination of children across the world. He created books that became favorites to children and adults.
As a youngster, Geisel drew street scenes of Springfield, as well of local attractions such as the zoo. Later, he was admitted to Dartmouth. There, he drew cartoons for the college humor magazine, and served as the editor-in-chief.
However, after he was caught drinking alcohol, his position at the paper was terminated. This was the time of prohibition, so buying alcohol was banned. He could no longer submit to the magazine as Ted Geisel. He devised a loophole, and started drawing and writing under a pseudonym. He was now known as "Seuss." After attending Oxford, he became a cartoonist for several magazines.
In 1937, after being rejected by 27 publishers, Vanguard Press published his first story, renaming it "And to Think That I Saw It on Mulberry Street." It received positive reviews as being original, entertaining, and unique.
Random House enticed him from Vanguard, and his career was taking off. His immensely popular book "The Cat in the Hat" was published in 1957, and was his version of a child's first book. It was a model of how children could learn to read while having fun. The story is about two children who get stuck inside on a cold day with, of all things, an energetic cat.
Later in 1957, Geisel followed with another huge success, "How the Grinch Stole Christmas!" The book stemmed from his own aversion about how materialistic holidays had become.
Those two books propelled Random House to being the leading publisher of children's books. At the same time, Dr. Seuss was a celebrity.
However, celebrity status often brings controversy, and Geisel was no exception. A couple of his books, "The Lorax" and "The Butter Battle Book" had political themes.
The popular "Oh, the Places You'll Go" is still given as a gift to graduates. His characters and silly words still resonant today, and appear in film and on merchandise. Geisel passed away in 1991, but his legacy continues.
Geisel's popularity still exists within the marketplace. A first edition, first printing of the 1957 classic "How the Grinch Stole Christmas!" sold for $3,750 in a 2014 auction. The book was inscribed. An original, undated, signed sketch of "The Cat in the Hat" went for $6,600. A very unique item related to Ted Geisel sold for $6,875 in a Heritage Auction. It was a Walt Disney color photograph with an inscription to Geisel. The item appealed to Walt Disney and Dr. Seuss collectors.
An original Dr. Seuss drawing of a dog wearing a scary mask and frightening three cats sold for $12,500, and an original cartoon illustration called "The Tiller of the Soil" has sold for $15,000.
Ted Geisel, Dr. Seuss, is an American icon, whose popularity has transcended the globe. He was unique in making children's books fun and entertaining to read, where they had long been considered boring. As a result, literacy scores improved. He was hailed as a creative genius, and his popularity is evidenced by the sales of his books and merchandise to this date. 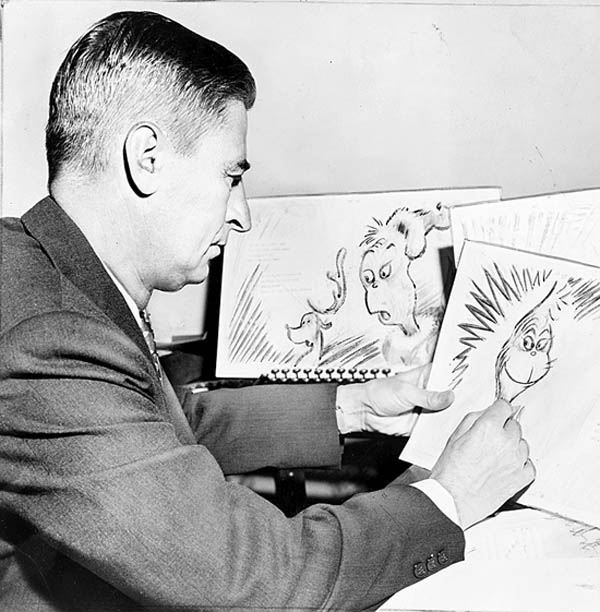