A rare American Flyer G. Fox & Co. S gauge toy boxcar train, from a very limited production set made in 1946, chugged off for $18,975 on day two of a two-day, online-only Toy and Train Auction held Aug. 11 and 12 by Weiss Auctions, based in Lynbrook, N.Y. The boxcar was the top lot in an auction that grossed $400,000 and set several record prices.
What is normally an off-month for us turned into a two-day gangbuster sale, with record prices realized in all areas of toy trains, said Philip Weiss, the owner of Weiss Auctions. There were 498 lots of trains in total, and all 498 sold, most for above estimate and some even multiple times the estimate. Toys did well, too, but trains right now are so hot we have more auctions planned.
The American Flyer G. Fox & Co. boxcar is one of the most desired trains a collector can own. The price realized for the one sold was a new auction record. Its the Holy Grail for American Flyer collectors for sure, and the winning bidder had been trying to get one for the last 30 years, according to Weiss. It was a respectable example, Tuscan painted on white mold with nice lettering.
The toy train auction featured part two of Frank Pisani's American Flyer S gauge collection (including the G. Fox boxcar), a six-foot dealer poster, three and five digit NP passenger sets, the latter being boxed, nice five-digit boxcars and reefers and many diesel and steam sets. Also sold were many S gauge accessories from the Neil Padron estate. All prices reported include a buyers premium. Internet bidding was provided by LiveAuctioneers.com and Proxibid.com.
What is believed to be the rare, handmade factory production of Lionels 1805 Land, Sea and Air Attack set, used as cover art for the 1959 advanced catalog, made $8,700. Also, a Lionel 6557 reverse number train car, dark chocolate brown with a white smoking stack, just the second one Weiss Auctions has ever seen, the chassis unrun, finished at $4,680.
The day one toys auction featured the first session of the Jack and Maurice Manoil collection from the Manoil toy archives; a collection of 175 Russian St. Petersburg soldiers; and many boxed tin toys, battery ops, and pre-war pressed steel vehicles and trucks by Buddy L, Metal Craft, Keystone and Marx, from the Tony Bifano collection.
Also offered was a Hess truck collection, all in the original boxes; over 50 mint-on-card GI Joes, TMNT, Mego Star Trek and WGSH, Transformers, MASK, He-Man and Silverhawk; and a collection of Marx playsets, in the original boxes.
Other sets included Robin Hood, Alaska, Medieval Castle Fort, Cape Canaveral, Tom Corbett's Space Academy and others; model kits including a 1950's Holy Grail space kit "Revell XSL-01 Manned Space Ship"; plus many other Revell aircraft carrier kits, baby boomer toys, games and more. In all, over 400 lots came up for bid in the toys auction.
What would have been one of the star lots of the toys auction actually came up for bid on train day. It was the hard-to-find, boxed AC Gilbert 1951 Atomic Energy Lab, an iconic Cold War-era toy and the first one Weiss Auctions has ever handled. The huge set was packed in a suitcase-style box, all major and minor components appearing intact, and realized $3,600.
A highly coveted by collectors 1982 mint-on-card GI Joe Commando Snake Eyes, 9 Back, series 1 / version 1 action figure by Hasbro, never removed from the card, went for $7,200. Also, a sealed, never-opened, never-played Marx 4658 Battle of the Blue & Gray Civil War-themed playset, including figures for Lincoln, Grant and Lee, garnered $4,080.
Tops among the Hess trucks were a vintage 1969 Hess Woodbridge tanker truck with the original box, made by Marx in Hong Kong, battery-operated, with all decals present ($4,200), and a 1966 Hess Tanker Voyager Ship prototype with the original box, super rare, a prototype that would become the second issue piece of the Hess toy line, selling for $3,600.
For additional information, call 516-594-0731 or email Philip Weiss at Phil@WeissAuctions.com. 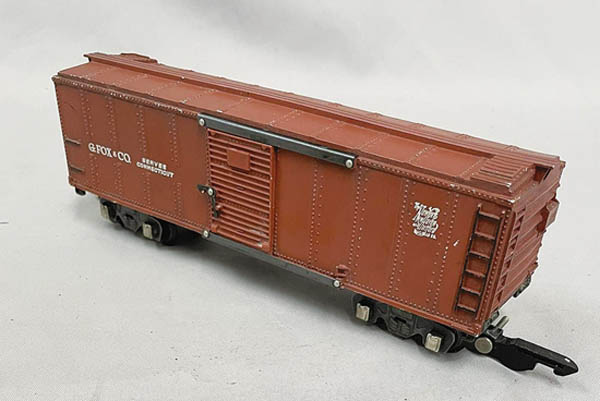