Pook & Pooks Downingtown, Pa., auction gallery teamed up with acclaimed antique toy expert Noel Barrett on Dec. 4 for a fun Christmas Antique Toy Auction. Helping Santa and his elves again this holiday season is always a treat for the staff at Pook & Pook. Many passionate toy collectors attended the preview during the week leading up to the sale. While there was no live audience in the gallery, that didnt stop bidders from actively pursuing their picks for the holiday season on the phones, via absentee in-house bidding, or on the two bidding platforms, Bidsquare and Live Auctioneers.
The sale came in above the high estimated total with a 97 percent sell-through rate. The anticipated high interest in the pre-holiday sale came to fruition. The easy access for cyberspace bidders paid off, with over 900 approved bidders chiming in from both platforms. A last-minute decision to eliminate in-house live bidding for safety reasons didnt deter bidders one bit.
The tradition of diverse offerings typical of a Pook-Barrett auction were continued with this sale. The highlights of the sale were the holiday specific offerings, including a wide variety of Christmas décor that started off the sale. Numerous German composition Belsnickel candy containers, German Father Christmas toys, Christmas trees, and ornaments were scattered throughout the first third of the auction. One stern faced German composition Belsnickel candy container almost doubled its high estimate, bringing $2,318. A large German painted composition Santa Claus candy container measuring 18.5 inches high, which was originally purchased from the toy giant FAO Schwarz over a century ago, ho ho hod its way to $2,440, four times its high estimate. Waving past all expectations was a special Dresden American Flag Christmas ornament bringing $6,710, a record for a Dresden ornament? It was one of numerous Dresden decorations offered, all of which did ornamentally well. A top Yuletide piece that crossed the block was a figural milk glass Santa Claus miniature oil lamp. This unusual find came in at $2,318. For buyers who didnt want the trouble of decorating their own tree this holiday season, several fully adorned feather trees were up for auction, the top examples bringing $3,416, $2,318, and $2,196. Dasher, Dancer, Prancer and all of the other reindeer were pulling a sleigh of great prices. Eight composition reindeer candy containers came in at $2,440, over four times the high estimate, and five large Dresden reindeer Christmas ornaments came in at $1,464, well over their high estimate also. And finally, a Hubley cast-iron Santa with double reindeer pull toy dashed all the way to $1,464.
The iconic toy for under the Christmas tree has got to be a fire truck, and the Pook-Barrett team brought an incredible one to the auction block this time around. A mechanical model of a Knox fire truck from the turn of the century came in right at the higher end of its estimate at $7,930. A striding French Roulett & Decamps clockwork leopard measuring a fearsome 26 inches long with key-wind and nodding head action also realized within estimate at $3,416. A real surprise in the sale was a Reason Manufacturing Company The Flying Witches game. This unique item had no comparable examples to be found, so it was given a conservative estimate of $400-$600. Still in its original box, this sole example sported two crepe paper and painted tin witches riding brooms revolving around a pole topped with a crescent moon. The floor bidding started at $550, but in less than two minutes it had climbed to realize $3,660. A group of miniature dollhouse accessories with exquisite detail came in at six times the high estimate at $3,172. One shocker, according to Barrett, was the Bliss paper lithograph alphabet chair that sung its way past what he believed to be a generous $200-$300 estimate to $2,250. Some of the bidders apparently knew their ABCs a bit better than expected. A Marx tin lithograph Flash Gordon Signal Pistol, with the original box that was in excellent condition, shot its way over the top estimate, bringing $1,250.
The highlight of the aeronautical toy collection of the late Harry Nowak was a Kenton Flying Boat with FOKKER lettering on the wings and nickel-plated wing-tip pontoons. This exciting one-of-a-kind piece was bid on 23 times before it finished at $6,100. A second plane also blew the top off its estimate. A brightly colored red and teal Hubley cast-iron DO-X seaplane came in at $3,500, over four times the high estimate. The cast iron automotive toys kept coming down the chimney, including a number of excellent examples also from the Bill and Stevie Weart Collection, among them a group of colorful taxicabs and a nice example of a Hubley armored motorcycle. A highlight of the Weart Collection was a scarce Hubley cast-iron Truk Mixer cement truck, with revolving drum, nickel-plated tank, and an integral driver, which, even restored, still brought $4,148. A boxed Fred Thompson Smith Miller diecast Mack Auto Transport car carrier, no. C131/350, with six display vehicles in original boxes brought $2,000, which, according to Barrett, is $1,000 more than the one that sold last year, sans box. Those original boxes can really drive the price up! Additional iron automotive pieces included a group of colorful and finely crafted car models by Tom Selhoff. Even more iron in the sale came from a small group of mechanical banks highlighted by a Darktown Battery Base Ball Bank in its original box, which brought $3,904.
As popular as ever at the Pook-Barrett auctions are Baranger motions, colorful and cleverly electric animated window displays that were rented to small-town jewelry stores from the 1940s to 60s. Five of them crossed the auction block. The highlight, an incredible lovebird carnival display featuring a central Ferris wheel, a carousel, and a burger stand, all with lovebird couples and a placard that reads, You can be her Love Bird - Buy that Diamond Now, realized $8,540.
Toys for well-behaved little boys and girls permeated the auction and continued to bring strong prices across the board throughout the day.
For additional information, visit www.pookandpook.com. 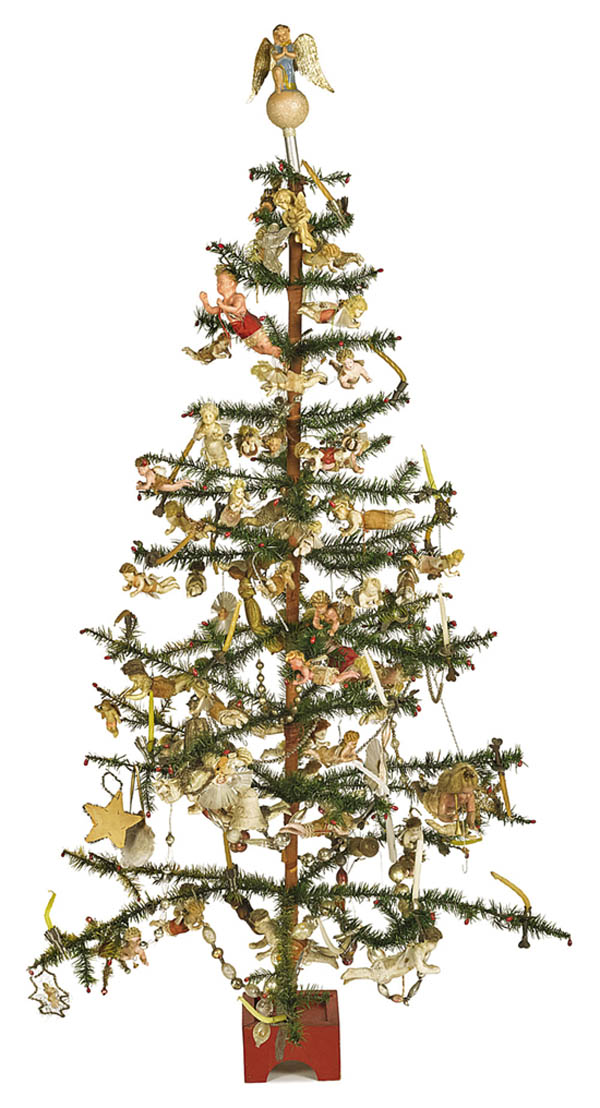