The Asheford Institute's latest results from its yearly annual survey of top buying trends within the antiques, vintage and collectibles marketplace has recently been released.
The institute, which has been conducting the industry related survey on its graduates for over 12 years now, uploaded its latest trending data on decorative arts sales for 2020 via a dedicated page on the school's website. While Covid 19 certainly had an effect on people's buying and collecting habits over the past year, many trends from this year's poll remained the same, despite the pandemic. In other instances, new collector categories were added, with some surging in popularity as people found themselves spending more time at home and in front of their computers.
Building on the results from last year's survey, 2020s poll offered an improved questionnaire that placed increased emphasis on compiling and grouping detailed information related to customers specific decorative arts buying habits over a 12-month period. Strong interest from past readers looking for updates to previous years statistics prompted the change in format construction of the survey to include a broader base of information as it applied to the overall popularity of certain collecting genres within the antiques and vintage marketplace.
"Despite the difficulties with Covid, we're continuing to ask questions that will hopefully further illuminate the specific sales categories and industry practices that have been most profitable for antique and vintage dealers over the past year," said institute director Charles Green. "Being able to provide our students and readers with as much pertinent information as possible about what's selling in a particular geographic region, and how they can apply that data to help grow their own antique and vintage business, has always been key to the survey."
One of the main factors for the poll's continued success, says Green, has been its steady increase in size. "The number of respondents queried has jumped year-over-year. Last year we increased the survey size by 10 percent, and in 2020 we upped that number by another nine percent," said Green. The school's director believes the yearly increase in raw data compilation has greatly improved the accuracy of the poll's overall results regarding the popularity of particular sales categories within the antiques and collectibles community. "With each passing year, the survey has not only grown in scope, but has provided a better picture of actual sales results within the marketplace itself," said Green.
Anthony Harper, the school's lead researcher for the survey, echoed the director's comments about the revised poll format, while reiterating that the main objective of the institute's survey has always been to provide as precise an analysis as possible of measurable interest in current decorative arts trends. Harper went on to state that the key to getting meaningful survey results was based on receiving actual sales data alongside item-specific requests from buyers, which could then be used to indicate interest within a particular collecting genre.
Even though Harper has helmed the development of the school's surveys for over 12 years, he's still impressed at how well the results of past polls have managed to stand up over time. "When we first started out, we weren't sure if we were reflecting actual overall market conditions, or just a niche representation." However, since those first days, Harper said that not only did subsequent poll results reveal where the market was at, but, more importantly, they often foreshadowed where it was going to be. "Over the years, I realized that was probably one of the most significant and valuable pieces of information to come from the poll," said Harper.
Research staff from the school stress that while the current survey is based on a series of general questions and non-standardized statistical formulas, the results are nevertheless compelling when looked at in their entirety. Sometimes a trend just appears out of the blue," said Amber Shole, a research assistant on the school's polling team. "Last year's collectible craze over everything space-related took us by surprise, said Shole, "but this year, it's an old favorite that has suddenly returned to prominence with both collectors and buyers alike." Shole believes that while this year's top antique and collectible ranking wasn't as much of an outlier as last years, it was still a surprise, managing to climb from worst to first in a little under a year.
As past surveys have shown, there are always going to be a few perennial poll favorites, like Mid-Century Modern and Costume Jewelry, but Shole notes that changes are happening faster than expected. "We've seen the softening of the Mid-Century motif as trends continue to shift to less austere designs, and more comforting wood palettes begin to return." While Shole admits that Mid-Century items continue to be hot with younger buyers, she says that older, more established areas of collecting are beginning to gain back some ground. "Last year we saw millennials starting to look at Victorian-era items, and buyers along the East Coast show renewed interest in formal pieces from the Georgian period."
While the school's 2020 poll may have been skewed slightly by the effects of Covid and temporary lockdowns, Shole believes that despite these shortcomings, this year's survey clearly demonstrates that trends can literally pop out of nowhere, even during a pandemic. "What we've seen over the last few years are not only younger dealers, but younger buyers as well. They tend to set the stage for new trends, and once in motion, they seem to find a great deal of traction with the buying public."
For readers seeking the full results of the school's current 2020 decorative arts survey/poll (including this years winner), visit https://www.asheford.com/asheford-news-ticker-headlines/institute-releases-top-selling-antiques-vintage-data-for-2020.
To learn more about the antiques and appraisal study program being offered by the institute, call 877-444-4508 or email infor@asheford.com. 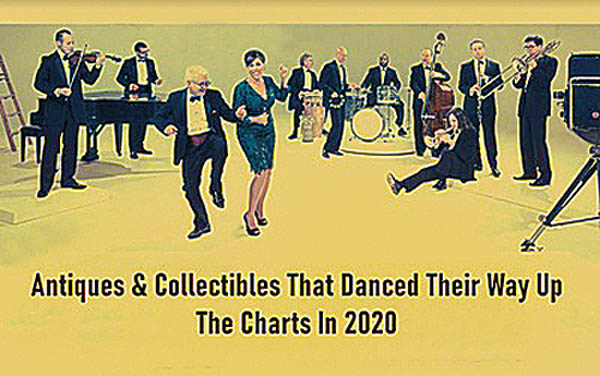