The Barnes Foundation will present Elijah Pierces America, a landmark exhibition featuring the rich and varied sculpture of woodcarver Elijah Pierce (18921984). On view in the Roberts Gallery from Sunday, Sept. 27, through Jan. 10, 2021, this is the first major retrospective of Pierces work to be presented outside his home city of Columbus, Ohio, for more than 25 years.
Co-curated by Dr. Nancy Ireson, deputy director for Collections and Exhibitions and Gund Family Chief Curator at the Barnes, and Dr. Zoé Whitley, director of Chisenhale Gallery in London, Elijah Pierces America features more than 100 rarely seen works created between 1923 and 1979, including painted bas-reliefs and freestanding carvings. A self-taught artist, Pierce used materials like wood, corrugated cardboard, crepe paper, house paint, aluminum foil, glitter, and rhinestones, to create extraordinary objects that expressed his faith, values, and perspective on the world. His art reflects the complexities of life in 20th-century America.
Born on a farm in Baldwyn, Miss., Pierce joined the Great Migration and settled in Columbus, Ohio, in 1924. After years spent working as a barber and preacher, in 1954 he opened his own barbershop, which became a social hub and functioned as his studio. Pierce created a unique body of work over the course of 50 years, producing his virtuoso woodcarvings in moments between cutting hair. His work features remarkable narratives, religious parables, autobiographical scenes, episodes from American politics, and includes figures from sports and film, with subjects ranging from Richard Nixon to Dr. Martin Luther King Jr. from Hank Aaron to Warren Beatty. In 1984, Pierce told the Columbus Dispatch, Id carve anything that was a picture in my mind. I thought a pocketknife was about the best thing Id ever seen. Through his woodcarvings, Pierce not only succeeded in telling a personal history alongside the history of African American people, but also revealed a dynamic visual history of the United States.
Pierces woodcarvings strike a chord with the diverse aesthetics present in the Barnes collection. As a collector, Dr. Barnes was interested in art for its formal characteristics and was not concerned with artists social origin. As a result, the Barnes collection is home to many works by artists with little or no formal art school training, including Paul Gauguin, Horace Pippin, and Henri Rousseau. In his display, Dr. Barnes placed renowned canvases by Matisse, Picasso, and Cézanne alongside household items he collected, such as furniture and wrought-iron objects, overturning traditional hierarchies to reveal universal elements of human expression.
We are proud to present this long-awaited exhibition, which honors Dr. Barness commitment to championing artists regardless of their training, said Nancy Ireson. The COVID-19 health crisis, which required our current temporary closure, forced us to adjust our exhibition schedule and delay the opening of Elijah Pierces America until September. We are incredibly grateful to the lenders for their flexibility and for the opportunity to keep this important exhibition on view until January 2021. This is an exciting opportunity to celebrate an important yet under-recognized figure whose work still deeply resonates today.
Catalogue
Co-published by the Barnes Foundation and Paul Holberton Publishing, London, the fully illustrated exhibition catalogue features essays by co-curators Nancy Ireson and Zoé Whitley, as well as contributions from Dr. Sampada Aranke of the School of the Art Institute of Chicago, artist Theaster Gates, and Michael D. Hall, adjunct curator of Folk and Self-Taught Art at the Columbus Museum of Art in Ohio. As the first substantial book on Elijah Pierce to be published in more than 25 years, this catalogue marks a new phase of the artists critical reception, building on the pioneering work of the Columbus Museum of Art in the 1980s and 1990s.
The Barnes Foundation is located at 2025 Benjamin Franklin Parkway in Philadelphia, Pa. 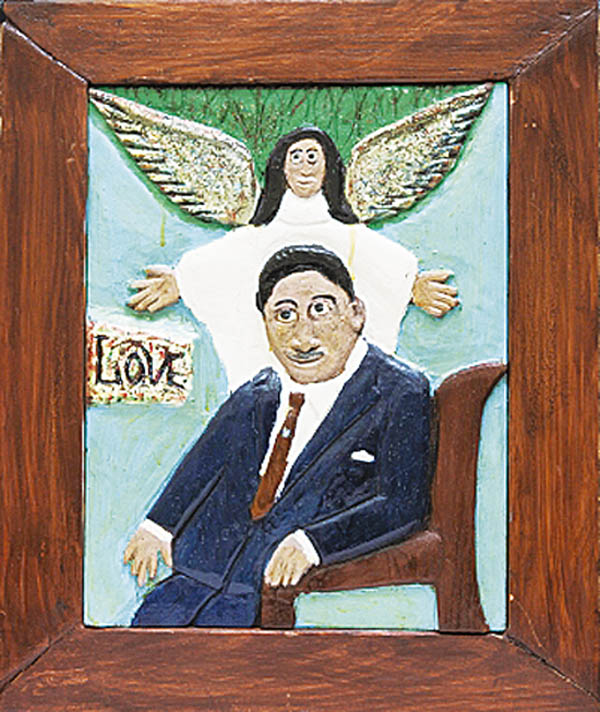