Hours before Bertoia Auctions president and auctioneer Michael Bertoia announced the first lot at the companys Oct. 11 sale of the Tony Annese collection, there were strong indications that an exceptional day of selling lay ahead. With a standing-room-only crowd, phone lines booked for the entire session, and two internet platforms bustling with bidders, it was clear that antique toy collectors worldwide were ready to play. As a result of the unrelenting competition, the 650-lot sale ran two hours longer than anticipated, and its final tally was nearly $1.8 million.
It turned out to be a significant event that reminded us of the excitement that surrounded the Donald Kaufman auction series (2009-2011). Many bidders flew in from Europe to preview the toys, and major European museums bid on both the Christmas antiques and Marklin trains, said Bertoia Auctions co-founder Jeanne Bertoia. We advertised heavily in the European market and contacted many bidders personally. I dont know of any advanced Marklin train collector who did not participate in the sale.
The additional promotional efforts paid off with prices that consistently exceeded estimates. A Marklin Third Avenue O- gauge trolley set estimated at $25,000-$45,000 sold for $72,000 and was soon en route to its German homeland. Likewise, a Marklin Limited Vestibule Express set was purchased by a European museum for $45,600, more than twice the high estimate, while a beautiful Marklin Versailles Café train station estimated at $15,000-$25,000 was bid to $31,200. The buyer in the room was an agent acting on behalf of a collector in Europe.
A boxed Marklin American Eagle set, which was Tony Anneses favorite train, sold in the room for an above-estimate $52,800, and an appealing Schlitz Beer car was claimed by an American collector for $31,200. He commented that he had been trying for years to buy an example of the Schlitz car at auction but had always been a contender. This time he vowed he wasnt going to miss out, and he made good on that vow, stated Jeanne Bertoia.
Among the other Marklin highlights were a Heitzwagen (Heating Car), $28,800 to a U.S. buyer; a Steeple Cabin Engine, $20,400 (est. $8,000-$12,000) to a phone bidder; and a Train Delay Indicator Board, $10,800 (est. $4,000-$6,000) to an internet bidder.
There are thousands of collectors of Christmas antiques worldwide, and based on the bidding volume attracted by the fabulous array of Santas, sleighs and nodders, it seemed most of them had heard about the sale. The top Christmas lot was an unusual design that paired a nodding Santa rider with a nodding donkey. Estimated at $7,000-$10,000, it reached a heady $26,400. An early nodding Santa with a beautiful face, fur beard and feather tree, which Tony Annese had bought at a Bertoias sale in the early 1990s, was one of several Christmas pieces that had been displayed in Bertoias booth at the Golden Glow of Christmas Past convention. Over 800 people attended the event, and many of them gravitated toward our showcase and to that piece in particular. Estimated at $3,000-$5,000, it sold to a bidder-agent in the room for $19,200. Another charmer, a magnificent nodding polar bear with Santa rider, drew numerous bids before selling over the phone for $24,000 (est. $5,000-$7,500) to a private collector.
Other Christmas winners included a beautifully cast Pennsylvania redware belsnickel, $15,600 (est. $2,500-$3,000); a Grulich wood and pulp Christmas mountain display, $11,400 ($1,500-$2,500); a ca.-1899 McLoughlin Bros. Game of Tobogganing at Christmas, $9,600 (est. $4,000-$6,000); a Santa pilot in a wicker airplane, $8,400 (est. $2,500-$3,500); and a tiered Christmas village and candle house with reflective back-lighting of all the buildings windows, $5,700 (est. $600-$900).
Leading the paper-on-wood toys was a jaunty carved and polychrome-painted carousel elephant platform toy, which sold near the top of its estimate range at $28,800. The buyer was an Americana collector who attended the sale expressly to bid on the colorful pachyderm. A 27-inch-long Reed Band Chariot Wagon deserved an encore for its completeness and pristine condition. It sold for $6,000. A veggie people skittles set that Annese had purchased years ago from Bertoias went to a new home for $8,500, while the top seller from his specialty collection of German Erzgebirge toys, a Turk figure smoking a pipe, was purchased by a European museum for $6,000, five times the high estimate. Pictured in Flora Gil Jacobs The Small World of Antique Dolls Houses, a deluxe Gottschalk stable with original horse figure trotted to $14,400 (est. $6,000-$9,000).
Other European toys of note included a Rock & Graner paddlewheel boat (ex. Dick Claus collection), $14,400, and Jeanne Bertoias personal favorite, an elegant Lutz/Marklin horsedrawn sleigh, $10,800 (est. $3,000-$5,000).
An excellent selection of early American horse-drawn cast-iron toys featured several desirable fire vehicles: a Pratt & Letchworth hose reel, $9,600, and a Carpenter ladder wagon with original box, $9,000. The early American tin toys included a boxed George Brown clockwork locomotive, which sold for $9,000 (est. $2,500-$3,500) to a buyer who previewed the piece in person, then bid by phone the next day.
After the auction, Tony Annese commented, The sale reminded me of the early days of collecting, where you met your fellow collectors and the auction itself was an event. The Bertoia organization did a great job in getting the word out. I was glad to see many of my things going to fellow collectors whom I like and respect. It was a remarkable event that people will remember for years to come.
All prices quoted in this report are inclusive of buyers premium.
For more information, call 856-692-1881 or email toys@bertoiaauctions.com.
All images courtesy of Bertoia Auctions. 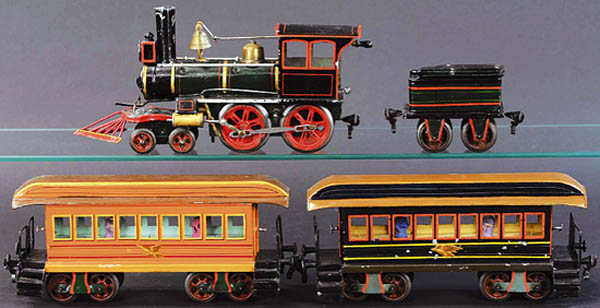