Buddy "L" Toys, The Missing Link, Before It All Started

Before and after the first world war, Moline Pressed Steel in East Moline, Ill., was known for industrial objects, particularly real car parts. Their welded heavy steel construction and strong, lustrous black paint characterized their industrial/commercial products.
Moline Pressed Steel, aka Buddy "L," began to manufacture heavy and industrial themed toys around 1921/22. Fred Lundahl started the toy line to offer his son, Arthur (Bud) Lundahl, well-manufactured toys to play with and named them Buddy "L." These heavy and clunky steel trucks, trains, busses and other construction toys such as steam shovels were typically made of heavy welded steel with double baked enamel. Some toys were well over 20 inches long. Moline Pressed Steel made many accessories, including heavy steel train tracks that could range up to five feet long. The toys known as the Buddy "L" line featured gears, pulleys and winding mechanisms.
Recently, an apparent household object made and manufactured by Moline Pressed Steel was discovered, a "Universal Soap Slicer." Both the slicer and the toys had the same construction characteristics, heavy welded steel parts painted a deep dipped baked-on black paint.
In the 1991 Buddy L Toys book volume 1, page 16 refers to a black enameled "gadget" described as a soap flaker and referred to the object as a black box. This was a promotional item and given to clients and customers. It is speculated that this pre-toy line soap slicer by Moline was made around 1918 or 1919. The winding mechanism on the soap slicer was also featured on the steam shovels and other toys with mechanical parts. One pictured Buddy "L" toy was pictured for comparison. Perhaps this kitchen utensil was a transitional item between the production of car parts and toys.
This style of manufacturing later reflected the strength and quality of a pioneer early 20th century Illinois manufacturing company. 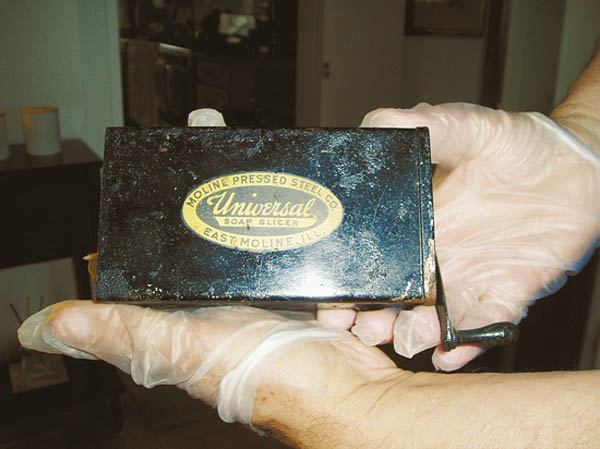