On Thursday, Friday, and Saturday, Oct. 29, 30, and 31, Morphys will auction the last, and very best, of the renowned Mel Getlan collection, along with other fresh-to-market collections, at an all-star 1,635-lot Coin-Op and Antique Advertising Auction. The live event will take place at Morphys gallery in Denver, Lancaster County, Pa., starting at 10 a.m. ET. All forms of remote bidding will also be available, including absentee, phone, and live via the internet through Morphy Live.
Mel Getlan grew up in the coin-op business and started collecting coin-op and gambling machines in the early 1970s, said Morphy Auctions president, Dan Morphy. In the coin-op hobby, his collection is considered one of the all-time greats. We expect strong competition over Mels machines because his fellow collectors know just how rare some of them are.
The star of the Getlan collection is a sensational Caille Bros. Triple Centaur Jackpot musical upright slot machine in working order with keys, the only one known to exist. Housed in a single oak cabinet, it accepts nickels, quarters, and nickels, respectively, in its three separately operating sections. Back in the golden age of slot machines, operators had to pay for a gambling license for each machine, but the innovation of double and triple upright slots allowed operators to increase their revenues while still paying for only one license, explained Morphy. That was outside-the-box thinking. The Triple Centaur Jackpot musical upright slot machine is in original condition, including its metal castings, has been a part of the Getlan private collection since the 1970s. Its pre-sale estimate is $200,000-$300,000.
Also manufactured by the Detroit firm Caille Bros., a 1904 Peerless Roulette five-cent floor model slot machine is housed in a rich oak cabinet accented by decorative iron castings with a high-contrast, antiqued finish. Players deposit nickels into their choice of seven coin-slots and pull the lever to spin the wheel and watch the ball bounce beneath the glass window. The color the ball lands on determines the payout. This fantastic original machine with older restoration comes to auction with a $180,000-$250,000 estimate.
In a league of its own, the five-cent Liberty Bell slot machine in Morphys sale was created ca. 1898 in San Francisco by German-born mechanic Charles Fey (1862-1944). This particular model is important to the history of gambling machines because it represents the first-ever three-reel or dial payout slot design. Fey was 29 years old when he invented the machine, which he named the Liberty Bell because it rang a bell upon payout. The highly sought-after slot works perfectly and comes with keys. The estimate will be $175,000-$250,000.
Antique coin-op machines with a baseball theme are especially hard to find because they are coveted by collectors of coin-ops and sports memorabilia alike. Two of the very best will be ready to knock it out of the park at Morphys, starting with a 1927 one-cent All-American Baseball Game. Known as Model H and manufactured by Amusement Machine Co. for a three-year period from 1929-31, it comes with a key and is estimated at $50,000-$80,000. Collectors will also be stepping up to the plate to vie for an all-original five-cent Little Rip baseball-theme payout trade stimulator made by Mills Novelty Co. In its decorative cast-iron case with a placard that reads Get in the Ball Game! this very special machine not only displays phenomenal condition, it also plays perfectly. The estimate will be $40,000-$70,000.
The antique advertising section is loaded with great pieces from every imaginable specialty category, including alcoholic beverages, candy, soda pop, tobacco, barber shop, circus/carnival, and more. An incredible late-19th-century reverse-on-glass sign advertising Brown The Prompt Sign Artist is elaborately detailed with gold and silver inlay and mother-of-pearl accents. This framed sign, which is possibly the earliest reverse-on-glass sign ever handled by Morphys, is expected to reach $10,000-$20,000.
For additional information on any item in the sale, call 877-968-8880 or email info@morphyauctions.com. View the fully illustrated catalog and sign up to bid live online at www.morphyauctions.com.
All images courtesy of Morphy Auctions. 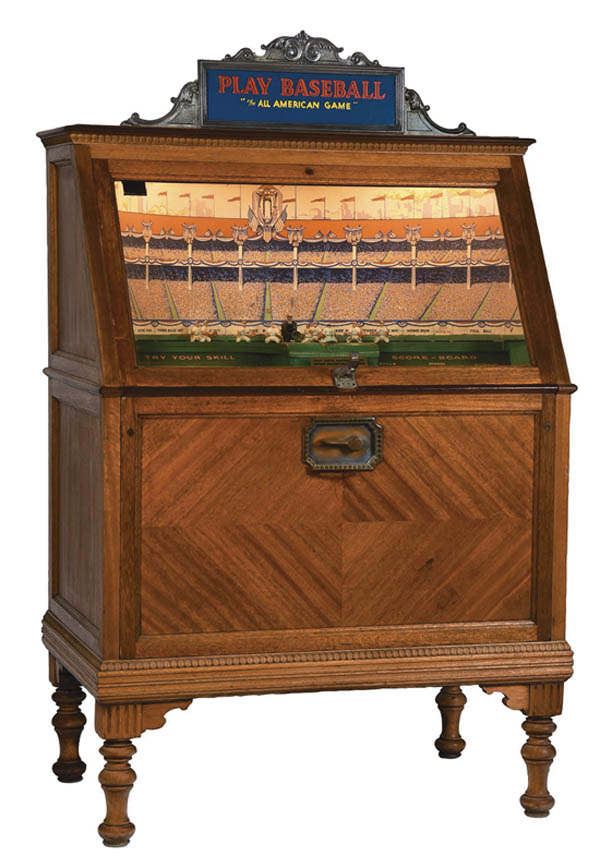