Also Featured Will Be Peerless Selection Of Rare Vending Machines, And Antique Advertising

A lively atmosphere punctuated by the exhilarating sounds of pipe organs, violins and a multitude of percussion instruments welcomed visitors to Morphy Auctions gallery in the countdown to a sensational Coin-Op and Antique Advertising sale slated for March 28 and 29. The sale will now take place on Saturday and Sunday, April 25 and 26. The main attraction is a private collection that Morphy Auctions founder and president Dan Morphy describes as the best and most significant offering of mechanical and coin-operated music, vending and gambling machines ever to pass through our doors. Additionally, the two-day event boasts an impressive lineup of antique advertising items whose quality and rarity are second to none.
If there had been Grammy Awards in 1905-06, the top prize surely would have gone to the Mills Novelty Companys Violano-Virtuoso. An incredible entertainer, its rich and stirring sound comes from two mechanical violins with accompanying piano that perform according to which music roll is chosen. Meticulously restored to its original condition, the Violano-Virtuoso was designated one of the greatest scientific inventions of its age by the U.S. government.
Double upright slot machines like the Mills Twin Chicago with musical attachment dont appear in the marketplace very often. Accepting quarters on one side and nickels on the other, the double-slot machine was designed as a boon to operators who could offer customers two gambling machines for one operating license. The example in Morphys sale is in wonderful original condition, even retaining its original music box. It pays and plays and is expected to reach $60,000-$90,000 on auction day.
Another ornate beauty, known as The Victor, was manufactured in 1906 by Victor Novelty Works. The musical 25-cent upright slot machine is lavishly embellished with hand carving on the oak case, nickel-plated adornments, and brightly colored glue-chip front glass. One of the nicest of all known examples, it is estimated at $50,000-$70,000.
A mechanical marvel of its time, a very rare five-cent Multi-Phonograph equipped with a 24-play cylinder was made around 1915 by the Multi-Phonograph Co., Grand Rapids, Mich. It is an earlier version that plays two-minute as opposed to four-minute records. An excellent, fully functional example, it carries a $50,000-$100,000 estimate.
The gallery preview will resonate with the thrilling sounds of a J.P. Seeburg Style H Orchestrion, whose harmonious instruments include a piano, bass and snare drums; a rank of flute and violin pipes; xylophone, cymbals, castanets and more. Made during the first quarter of the 20th century, the versatile music-maker spent most of its life at the famed Crystal Saloon in Virginia City, Nev. It underwent professional restoration in 2011 and is ready to play.
The star of the show may well be the breathtaking Mills bow-front Violano-Virtuoso that Morphy Auctions Coin-Op, Gambling and Mechanical Music specialist Tom Tolworthy describes as being in a league of its own. Housed in a superb quartered-oak cabinet, the machine was scrupulously restored last year by Robert Loeffler, a renowned restorer who is respected throughout the hobby. Fewer than 20 of these majestic machines are known today, and this one stands out as one of the best. I dont see how it could be improved upon, said Tolworthy. Accompanied by six rolls and all of its keys, it comes to auction with a $100,000-$150,000 estimate.
There is no way to overuse the word rare in describing this auctions many highlights. It certainly applies to a Regina Style three, tall-case clock with a Seth Thomas striking movement and penny slot allowing for a choice of music to be played whenever desired. At a towering nine feet tall and housed in an elaborately detailed oak cabinet, it will convey to its new owner with several ready-to-play music discs.
Vending machines that dispense gum, snacks, cigars, perfume, or even ones fortune on a card have captured the publics imagination since the late-19th century. Morphys will shine a spotlight on 95 top-notch antique vending machines in the sale, including many great rarities. A one-cent Novelty Cigar Co. Lion peanut vending machine (distributed by A. Marx & Co.), regarded by many as the ultimate tall-globed peanut machine, is in all-original condition and estimated at $15,000-$20,000. In perfect working order, a Pulvers Kola-Pepsin one-cent gum-vending machine with a Foxy Grandpa character behind its glass carries a $10,000-$15,000 estimate. Both machines are depicted in the respected reference, Silent Salesman Too by Bill Enes.
It will only cost a penny to learn what the future holds, according to the feline clairvoyant Puss in Boots, who tells fortunes in an arcade machine patented in 1896. One of only a small number of original examples still in existence, this very rare and coveted relic of the early amusement park era is estimated at $50,000-$90,000.
Bidders can always count on finding something theyve never seen before in a Morphys sale, like a turn-of-the-20th-century Owl Cigar Store reverse-on-glass sign measuring 80.25-by-30 3/8 inches. Possibly the only known example, it has a $20,000-$30,000 estimate. Another prized entry is the artistically exceptional cardboard poster with an avian theme that advertises U.S. Cartridge Co.s black shotgun shells. Ideally suited to an advanced firearms memorabilia collection, its aiming for a top bid of $10,000-$15,000.
Morphys Coin-Op and Antique Advertising Auction will be held at the companys gallery in Denver, Pa., starting at 10 a.m. Eastern Time each day. All forms of bidding will be available, including live via the internet through Morphy Live. For questions, call 877-968-8880 or email info@morphyauctions.com.
All images courtesy of Morphy Auctions. 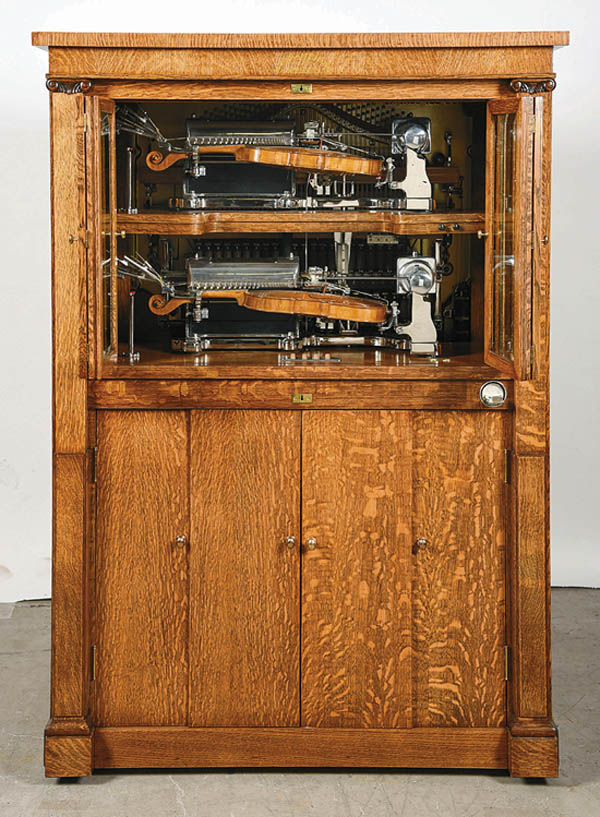