Kate Brown of Artnet News on art.net.com reported a prized and rare sculpture by Paul Gauguin that was acquired by the J. Paul Getty Museum for a reported $3 to $5 million has been deemed a fake.
The sculpture, titled Head with Horns, has been reattributed by researchers to an unknown artist and pulled from the museums permanent display, according to the Art Newspaper and Le Figaro. The institution acquired the work in 2002 from Wildenstein & Company, a French-American art-dealing dynasty that is embroiled in a series of lawsuits.
Researchers made the change in attribution quietly last December, and the work was noticeably absent from recent Gauguin blockbuster exhibits at Ottawas National Gallery of Canada and the National Gallery in London.
The prime pieces of evidence linking the work to Gauguin were two photographs of the sculpture by the artist included in his Tahitian travelogue, Noa Noa. A 2002 press release from the Getty drawing attention to its resemblance to the artist suggested that it may have been a symbolic self-portrait.
Sculpture by Gauguin is exceedingly rare, and this intriguing work stands out as a superb example, said Deborah Gribbon, then the director of the J. Paul Getty Museum, at the time of the acquisition. We feel especially fortunate to be able to display Head with Horns, which will become a natural centerpiece of our installation of symbolist art.
After being bought by Getty, the piece circulated the world, traveling to shows at Tate Modern in London, the National Gallery of Art in Washington, D.C., MoMA in New York, and the Museo delle Culture in Milan.
But the sculpture was never signed by Gauguin, and his photographs of it showed it atop a pedestal not carved in any of the now known styles. Originally dated to between 1895 and 1897, which lines up the artists time in Tahiti, it is now thought to be from 1894, a time when Gauguin is known to have been in France.
The work has long been questioned by some experts. Shortly after the Getty acquired it, Fabrice Fourmanoir, a collector of 19th-century Tahitian photography, found a picture of the sculpture by Jules Agostini captioned Idole Marquisienne (Marquisian Idol), suggesting that Agostini thought the piece was by an indigenous artist from the Marquesas Islands, then a part of French Polynesia.
In Agostinis photo album, Head with Horns is shown next to a portrait of George Lagarde, a collector of ethnographic art who may have been the owner of the sculpture. The photographs both date to 1894.
The sculptures provenance was always a bit murky. It was included in a show at the Fondation Maeght in 1997 after being purchased, four years earlier, by Wildenstein & Company from a private Swiss collector. The work was first attributed to Gauguin by Daniel Wildenstein, the author of a Gauguin catalogue raisonné of painting focusing on the years 1873 to 1888. Another volume, covering the years 1888 to 1903, is due at the end of 2020 but will not include sculptures, the Wildenstein Plattner Institute tells Artnet News. They said that, to date, the sculpture has not been submitted to the WPIs Gauguin committee for research and examination.
This would not be the first time that the Wildensteins have been caught in a public controversy. The French art-dealing family has been accused of evading taxes in France, hiding missing or stolen artworks, and even of trading artworks with the Nazis during World War II, all claims the family denies.
The Getty is now researching the sandalwood sculpture and its lacewood base to try to learn more about its origins. Some Polynesian art experts say its devilish horns suggest the iconography is not local, but comes from Christian and European sources. Another theory, floated by Fourmanoir, is that it was carved by a European tourist.
Photo by Sepia times/Universal Images Group courtesy Getty Images. 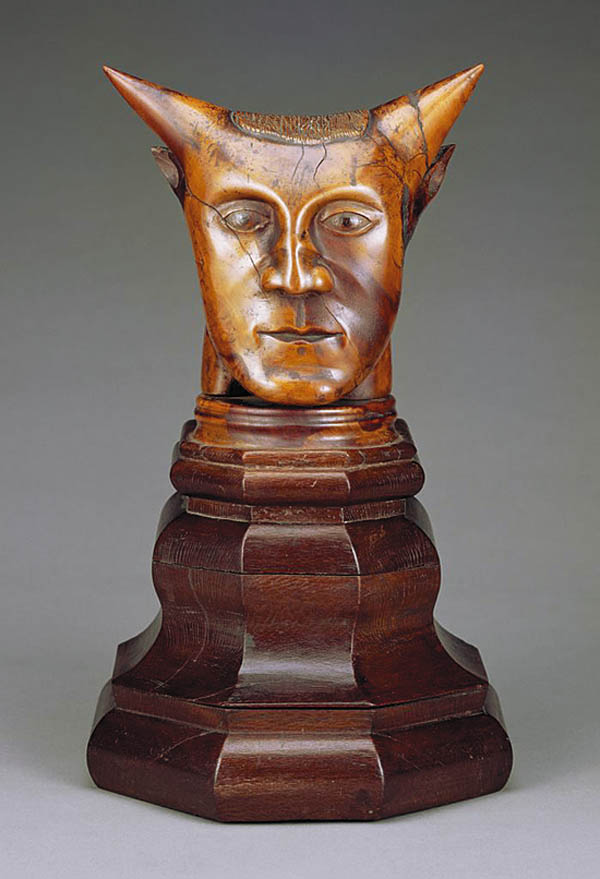