Grey Flannel Auctions Knocks It Out Of The Park With World-Record $183,500 Price For A Babe Ruth-Autographed Baseball

PSA/DNA-Authenticated, With Signature Graded Perfect 10, Ball May Be The Last One Ruth Signed

Grey Flannel Auctions has added a new world record to its long list of achievements with the six-figure sale of a baseball signed by Babe Ruth the night before he died. A prized highlight of Grey Flannels Jan. 22 auction, the PSA/DNA-authenticated ball opened for bidding at $5,000, and 24 bids later it had a new owner, who prevailed over the field of competitors at a heart-stopping $183,500. The PSA subsequently confirmed the winning bid to be the highest price ever paid for single-signature personalized baseball.
The team at Grey Flannel has handled many historically important signed baseballs but felt strongly that the Ruth ball consigned to the January sale might be destined for the record books.
We were excited about it from the first moment we set eyes on it, said Grey Flannels director of operations, Michael Russek. The autograph appeared impeccable. It was definitely the finest Ruth autograph we had ever seen on any item of sports memorabilia, not just baseballs. The PSA/DNA, which is the ultimate authority when it comes to authenticating athletes signatures, graded the autograph a Mint 10, which is as high as it goes. I would be very surprised if a better example ever were to appear in the marketplace. Obviously our bidders felt the same way, because it was a fight to the finish.
The story behind the ball adds an endearing footnote to Babe Ruths life story. In 1948, when his health was failing, Ruth was at a restaurant where a waiter approached him with a special request. The man asked if Ruth would autograph a ball for his daughter's birthday. At first Ruth declined, but later on he returned and asked the waiter for the girls name, which was Loraine. Ruth signed the ball, then left. He passed away the next day.
Many other outstanding prices were achieved in the companys first auction of 2020, which grossed $1,415,000. The earliest professional sports jersey ever handled by the firm, a 1902 Baltimore Orioles game-used flannel with direct family documentation, sold for $48,871. From the modern era, a pair of Dream Team basketball sneakers dual-autographed and game-worn by Michael Jordan at the 1992 Olympics soared to a $52,417 finish.
For more information, call 631-288-7800 or email info@greyflannelauctions.com.
Images courtesy of Grey Flannel Auctions. 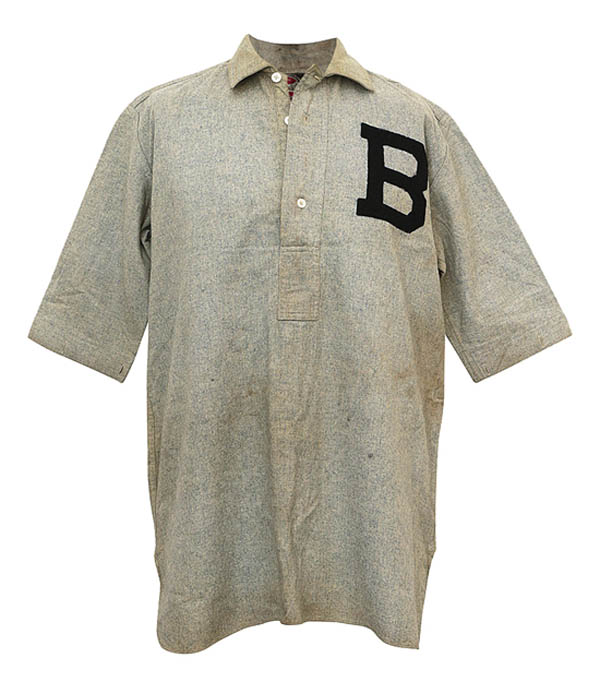