Anyone whos paid attention in the last forty years knows Halloween postcards of the early 1900s are the number one favorite among collectors of holiday cards. There have to be reasons for their continuing popularity. What is the enduring appeal of postcards made for a day that long ago lost its original significance?
Availability helps explain why Halloween cards have been in demand for many years. Enough can be found in dealers stocks and online to satisfy avid collectors, but theyre scarce compared to holidays such as Christmas and Easter. Most ephemera collectors avoid categories so scarce they can only add one item every few years. Fortunately, the potential for adding to a Halloween collection is good.
Halloween isnt as rare as Labor Day and Ground Hogs Day postcards, for example, but the scarcity of these holidays make them less collectible than Halloween. There simply arent enough of them to put together a significant collection. As postcards grew more expensive during and after the 1970s, more collectors chose to specialize. A Labor Day collection would have to be very small, but the quest for Halloween postcards can be a life-long pursuit. Collectors thrive on the possibility of adding to and improving collections, and here the potential of Halloween postcards is outstanding.
Estimates vary, but certainly more than three thousand different Halloween designs were published during the Golden Age (the early 1900s). This sounds like a lot, but production runs weren't large enough to satisfy all the collectors who would like to own them today. As with any collectible, when demand exceeds supply, prices reflect it. This makes Halloween postcards valuable and increases interest in them.
If Halloween cards were drab and unimaginative, scarcity wouldn't sell them. I own only one Midsummers Day card, suggesting its very rare, but its also rather colorless and sold for only pennies when I bought it. In fact, it took research to discover its purpose. Fortunately some of the best postcard artists of the day designed Halloween cards with everything from lovely ladies to scary witches and adorable children. Theyre colorful with bright orange pumpkins, yellow harvest moons, mythical creatures, gorgeous costumes, and intriguing situations. There are very few Halloween postcards without visual appeal.
The most prolific postcard artist of the day was Ellen H. Clapsaddle, a maiden lady who drew children that still tug the heartstrings today. Her mechanical Halloween cards are among the most expensive, but she was so prolific almost anyone can own a few examples of her work. Also still affordable, Frexias signed cards are harder to find but the children on them have a campy appeal. The most expensive and sought-after art was done by Samuel Schmucker and published by Winsch. These are unsigned but distinctive for clever and beautiful art.
Halloween can also be collected by publisher. Tuck was especially prolific, but firms from Anglo-American to Ullman produced postcards for the day. For some collectors, the fun comes in putting together checklists, an activity that still appeals. Halloween postcards are also great for those who like to display their cards at shows, club meetings, or public venues like libraries.
There was a time when people were steeped in superstition and genuinely afraid of witches, devils, and other scary creatures. The dark ages were truly dark, depending on the feeble light of candles or oil lamps to illuminate the night. Its easier to be afraid of the unseen when theres no way to penetrate the blackness. If theres a reason to celebrate the 31st of October, it lies in the freedom from ancient fears. The frightful creatures on Halloween postcards are reminders of ancient fears and evils: witch burnings, crippling superstitions, night terrors, and other horrors. The legends of the past appear on Halloween cards, giving them social and psychological depth without the very real fears of the past. All that on a colorful postcard!
Naturally the steadily rising prices of Halloween postcards over the last few decades make them more desirable. Although I would never recommend collecting for any reason but love, there is a certain security in knowing that high quality, excellent condition cards hold their value and appeal. The Internet has opened up a world of information, and several books devoted entirely to Halloween postcards are now available. Increased knowledge enhances the value of any collectible, and the fact that early postcard images are being reproduced only adds to the interest in the original.
These are the rational reasons for collecting Halloween postcards, but theres a more compelling one: They appeal to the kid in all of us. Trick-or-treating, dressing up in costumes, carving Jack-o-lanterns, bobbing for apples, scaring each other, telling fortunes, and generally having a great time on Halloween are childhood memories for many.
Today kids visit pumpkin farms, go begging in the daylight, and wear ready-made costumes. They may have fun, but postcards remind of us of earlier pleasures on Halloween: trick-or-treating from house to house in the dark (never with an adult escort), little kids wearing homemade costumes to school and parading through the classrooms of higher grades to show them off, making a big mess bobbing for apples (never mind the water might have germs or chemical residue), and generally enjoying a good but mock scary time.
The best Halloween postcards are a hundred years old, making them official antiques and quite pricey, but many are available from 1912 to 1915 period. These somewhat later ones were made by American firms and are usually less expensive than the earlier cards, making them excellent buys now. Find them when you can in excellent condition and use good sense in preserving them. Maybe they'll be as entertaining in another century as they are now. 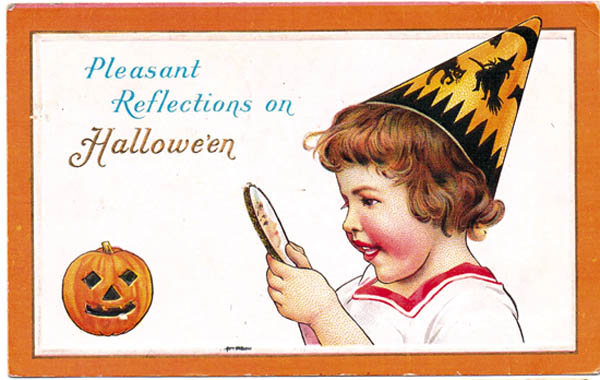