The only surviving blaster originally used by Harrison Ford as Han Solo in Star Wars: A New Hope sold at Rock Island Auction Companys August Premier Auction for $1,057,500. Han Solos blaster headlined the three-day event that drew international interest and achieved over $23 million.
Interest in the iconic blaster was hotter than the twin suns of Tatooine in the run-up to the auction. The BlasTech DL-44 Heavy Blaster was estimated between $300,000-$500,000. Bidding quickly blew past the estimate, like the 2018 sale of a blaster prop used in Return of the Jedi, which realized $550,000.
We know how passionate fine arms collectors can be, and its great to see that same energy in other fields of collecting, said Kevin Hogan, president of Rock Island Auction Company. Were grateful for the excitement and support generated for this auction. Its yet another demonstration of the growing markets for collectibles and fine arms.
The prop, one of three made for the 1977 film, was previously considered missing and presumed lost forever. The gun had been in the inventory of Bapty & Co., a London prop house that provided numerous weapons for A New Hope.
The blaster, comprised of military surplus parts, would go on to serve as the prototype for those carried by Solo throughout the first three Star Wars films produced. Star Wars fans refer to Han Solos blaster, one of the most recognizable weapons in movie history, as the Hero prop from Star Wars: A New Hope.
This Aug. 26, 27, and 28 Premier Auction was the fifth largest in the companys history. With more than 2,000 lots, the sale marked the companys sixth consecutive event to breach the $20 million mark. Additional highlights new and old included a pair of pistols wielded by Angelina Jolie in the 2001 film Lara Croft: Tomb Raider, which sold for $35,250; Wild Bill Hickoks Smith & Wesson No. 2 revolver, $235,000; the finest known 1891 Production Colt Single Action Army revolver, $763,750; and a Winchester "One of One Hundred" Model 1873 rifle, which sold for $440,625
About Rock Island Auction Company
Founded in 1993 by its current CEO Patrick Hogan, RIAC has a 150,000-square-foot campus and hosts around 18 auctions each year. They are located in Rock Island, Ill.
For more information, call 800-238-8022 or visit www.rockislandauction.com. 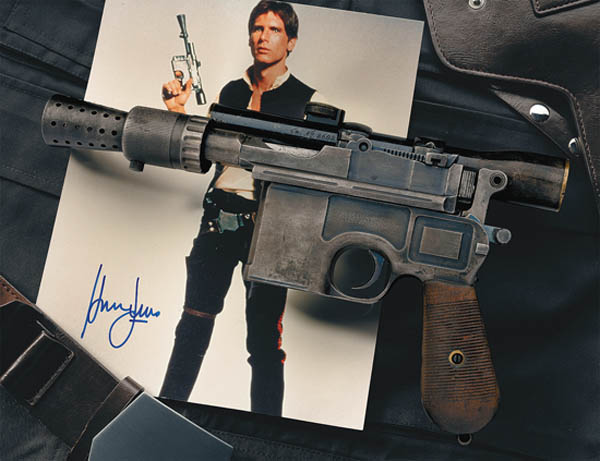