It was a comic-book auction for the record books. And not just because Heritage Auctions Sept. 8 to 12 Comics and Comic Art Signature Auction realized more than $26.5 million to smash the previous record for the worlds most valuable comic book auction by more than $4 million.
Records were set throughout the spectacular event, beginning day one, when at the auctions outset Jack Kirbys Dr. Doom-struck cover art for 1969s Fantastic Four No. 86 sold for $480,000, the highest price ever paid at auction for an original work by comicdoms most influential creator. The following day came a worldwide headline, when Spider-Mans debut in Amazing Fantasy No. 15 sold for $3.6 million to become the most valuable comic book anywhere. Then, on day three came one more Christmas miracle, when Charles Schulzs Dec. 18, 1966, Peanuts strip sold for $360,000, the most ever paid at auction for an original Charlie Brown.
By the time the auction closed, more than 6,400 bidders worldwide had participated in a near-sellout event that realized $26,555,721, a new highwater mark for a comic book and comic art auction. That topples the previous record of $22.4 million set at Heritage Auctions three months ago.
About a decade ago, the record sale price for a comic book was $317,000, and the biggest comics auction was $5 million. Look how far weve come, stated Heritage Auctions vice president Barry Sandoval. In last weeks sale we had 500 different lots sell for at least $10,000 each, and 68 of those hit $50,000 or more. My favorite part of all this is that 26 different consignors will be receiving checks for more than $100,000 after the auction, and a couple of those will be for seven figures.
This was such a remarkable auction that a half-million-dollar lot didnt even garner a headline. A CGC Fine+ 6.5 copy of Batman No. 1 brought $576,000, the highest price ever realized for that historic book in that grade. This has been such a record-shattering year for the Dark Knight that even a CGC Good 2.0 copy of his 1940 solo debut now sells for $222,000, a once unfathomable number.
Moments after Amazing Fantasy No. 15 climbed to its record high, a CGC Near Mint 9.4 copy of The Amazing Spider-Man No. 1 sold for $241,200. Only four years ago, the first issue of the wall-crawlers solo title was selling for about half that in the very same grade. Spidey, now at the center of the ever-expanding Marvel Cinematic Universe, appears to have become the most treasured character in comicdom.
And, surely, next years long-anticipated big-screen bow of Black Adam, to be played by Dwayne The Rock Johnson, factored into this auctions record price for 1945s The Marvel Family No. 1, which blew past pre-auction estimates to sell for $186,000. But this was also a historic issue. Its but one of two copies graded this high (CGC Near Mint 9.4), and it comes from the Promise Collection Pedigree, which contains some 5,000 Golden Age books not seen since they were bought off newsstands in the 1940s.
Most of the Promise Collections offering in this event exceeded expectations, again, among them the very first issue of Superboy, which, like most books in the pedigree, is the best-known copy in existence. The CGC Near Mint 9.4 copy opened bidding at $22,000 but quickly soared to $72,000. But the Boy of Steel was quickly surpassed by the CGC Near Mint/Mint 9.8 copy of 1946s Suspense Comics No. 11, which boasts artist L.B. Coles iconic devil-of-a-cover. The highest-graded stunner, which looked fresh off the newsstand, sold for $132,000.
Each session contained its share of thrills, wonders and delights, beginning with the sounding of the opening bell, when a Sandman-co-starring page from Amazing Spider-Man No. 18 by (who else?) his co-creator Steve Ditko sold for $156,000. Only a few minutes later, the original art for the DC Comics house ad marking the debut of Neil Gaimans The Sandman sold for $96,000. And only a few moments after that, Frank Frazettas original cover for 1963s The Lost Continent paperback brought $132,000.
The auction also included this beloved rarity, a December 1987 daily Calvin and Hobbes by the beloved Bill Watterson, which realized $132,000 after some intense bidding.
In that same session, Alex Ross indelible portrait of The Dark Knight painted for the cover of 1999s prestige-format graphic novel Batman: War on Crime sold for $102,000, shattering pre-auction estimates and setting a new auction record for the beloved artist. Ross Caped Crusader was joined in this auction by his equally cherished and iconic Superman: Peace on Earth cover, which sold for $90,000.
But this event was about far more than just impressive numbers for important comics and influential art. As Sandoval noted, There were plenty of startling results to be found throughout the five-day auction, among them the very first printing of the very first issue of the Overstreet Comic Book Price Guide. The 1970 copy of the industrys standard-bearer, graded CGC Near Mint+ 9.6, demolished its pre-auction estimate to sell for $45,600. And an artists proof of Randy Bowens 1997 bronze statue of The Incredible Hulk, inspired by Kirby, likewise obliterated expectations to sell for $45,600.
But Hulk likes to smash. So, too, do Heritage Auctions comics and comic art events.
For more information, visit www.HA.com. 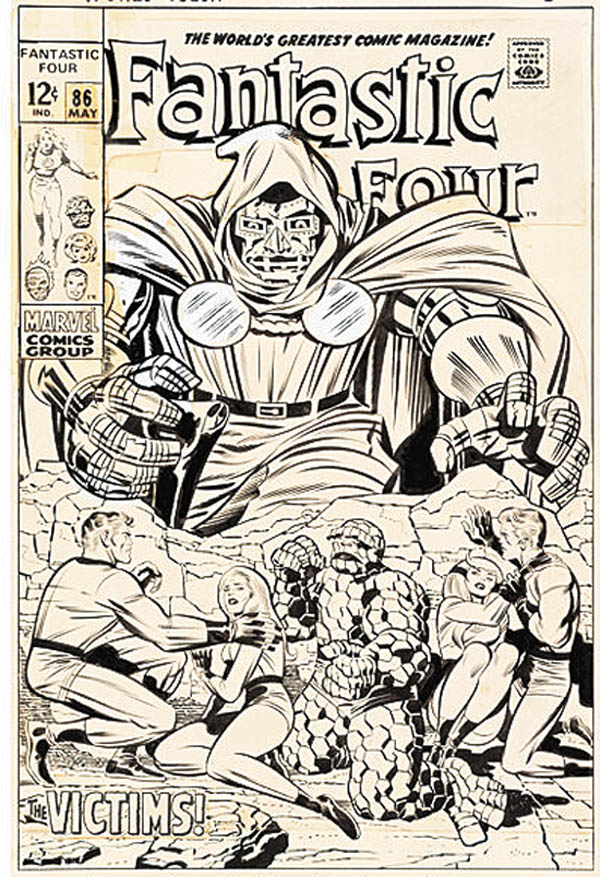