Hot Collectibles For the Holidays

Theres eggnog in one form or another on just about everybodys holiday menu. But how many remember that frothy hot nog known as the Tom & Jerry?
Creamier, frothier and significantly stronger than their trendier cousin, the Tom & Jerry, based on a century-old recipe is making a comeback. (Although in some venerable establishments its never really gone away.)
Years ago, as soon as the weather turned wintry, bartenders used to make up a daily bowl of special Tom & Jerry batter, and, with the addition of hot milk and an assortment of alcoholic beverages, ladle it out into special mugs to grateful customers. As holidays approached, lots of folks tried making it at home too.
American pottery and glass companies, always alert to spotting a trend, began to produce special punch bowls and mugs or cups, often emblazoned with holiday symbols, especially for this cold weather treat. Damon Runyon even wrote about Tom & Jerrys in his 1931 Blue Plate Specials.
Collectors of things retro might like to check out the local antiques mall, or possibly Grandmas attic, for a Tom & Jerry set of their own - thereby reviving a delicious holiday tradition. The sets range in price depending on age and condition. The oldest sets usu-ally consist of a heavy ceramic bowl and eight to twelve matching mugs. The words "Tom & Jerry" were usually rendered in gold script on each piece. A nice old McKee custard set of bowl and eight mugs is listed on e-Bay for $275.
Hall made a Fiesta Ware set, and McKee produced some sets in now-popular Jadeite. Hazel Atlas made a number of milk glass ver-sions, and these seem to be the easiest to find, and the least expensive. The general effect is just fine.
So where did the name come from? Drink history seems to be divided on this. Some say the originator was one Pierce Egan, an English author of an 1821 book called Life In London. His main characters were "Jerry Hawthorn, Esq. and his friend Corinthian Tom." The story goes that Egan created the drink to publicize his book. Other experts think that another British author, Jerry Tho-mas, who wrote the first known bartenders cocktail guide in 1862 was the originator. (Thomas, by the way, is also credited with in-venting the martini.)
(Prohibition interrupted the trend for a while. Some folks tried making "Virgin Tom & Jerrys" but it just wasnt the same.)
After you get your vintage Tom & Jerry set, you might like to try serving Tom & Jerrys to your own holiday guests this year. All of the recipes start with a batter you must prepare ahead of time. Whiskey, rum, brandy, etc. and hot water and/or milk are added when the drink is served. The batter rises to the top and gives the frothy look and feel. You can make one serving at a time, or prepare a big festive bowl of batter to serve a dozen or more thirsty revelers.
Try an old recipe, virtually unchanged for a century or so, or experiment with a new version, made sweeter and smoother with the addition of marshmallow creme.
Traditional Tom & Jerry
(Serves 24)
For the batter:
12 eggs, separated
1 pound sugar
2 ounces aged rum
1/2 tsp. ground cloves
1/2 tsp. ground nutmeg
1/2 tsp. ground allspice
Beat the egg yolks until thick and gradually whisk in the sugar. Add the rum and spices. In a separate bowl beat the egg whites un-til stiff and fold into the yolk mixture until well mixed.
For each drink, put 2 ounces of batter mix into a mug. Add one ounce each of brandy and rum (or bourbon) and fill mug with equal parts hot milk and boiling water. Top with grated nutmeg. 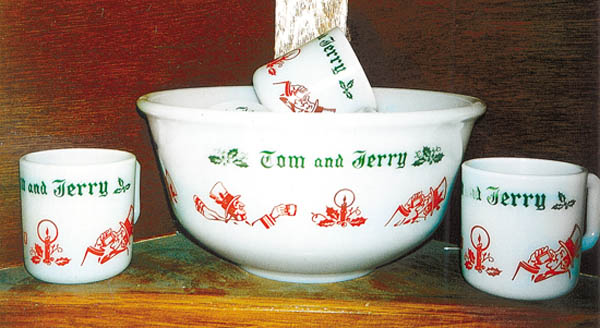