Market Trend Analysis Is For Antiques And Collectibles Trade

The Asheford Institute released its results from its yearly annual survey of top buying trends within the antiques, vintage and collectibles marketplace.
The Institute, which has been conducting the industry-related survey on its graduates for 11 years, uploaded its latest trending data on decorative arts sales via a dedicated page on the school's website.
Continuing with the theme from last year's survey was a new questionnaire format that focused on compiling and grouping information related to customers decorative arts buying habits over the calendar year. Strong interest from past readers looking for updates to previous years polling statistics prompted the change in format construction of the survey in 2018, and again in 2019, to include more detailed information regarding the popularity of specific buying genres within the marketplace.
"We're continuing to ask questions that further redefine the best sales categories and practices for both antique and vintage dealers alike," said current director of the Institute, Charles Green. "This involves providing our readers with as much relevant information as possible about the state of today's decorative arts marketplace, as well as being able to show them what's actually selling in their geographic region."
According to Green, the number of poll respondents queried in the survey has also jumped year-over-year. "In 2018 we increased the survey size by 15 percent, and this past year we've upped that number again by another 10 percent." The school's director believes the increase in respondents has led to a more accurate representation of data sampling regarding the popularity of particular sales categories within the antiques and collectibles marketplace. "The bigger numbers are simply giving us a more comprehensive picture of sales results," stated Green.
As the school's lead researcher for the survey, Anthony Harper agrees with much of the director's comments about the revised poll format, while reiterating that the main crux of the Institute's survey has always been to provide as precise an analysis as possible of measurable interest in current decorative arts trends. Harper went on to state that the key to getting meaningful survey results was based on receiving actual sales data alongside item-specific requests from buyers.
Harper, who has been instrumental in the development of the school's surveys for over a decade now, says he's still amazed at how well the results of past polls have managed to stand the test of time. "When we first started out, we weren't sure if we were reflecting actual overall market conditions, or just a niche representation." However, since those first days, Harper said that not only did the poll results reveal where the market was, but more importantly, it often foreshadowed where it was going to be. "That was probably the most valuable piece of data we could have hoped for," says Harper.
While members of the school's research staff stress that the current survey being conducted is still based on a series of general questions and non-standardized statistical formulas, the results are nevertheless compelling when looked at in their entirety. Sometimes when a trend gets going it's hard to stop," said Amber Shole, a research assistant on the school's polling team, "but this year that's exactly what happened." Shole says that a certain historical event surprised many industry insiders by skewing the statistics somewhat about halfway through the year. "It was a bit of an outlier, so that was the shock, but once it picked up steam, it just kept on rolling," said Shole.
Of course, there are always going to be a few perennial poll favorites, like Mid-Century Modern and Automobilia, but Shole notes that changes are continuing to brew. "There's definitely a sense that we're starting to turn the corner from the full-on modern motif towards something a little more subtle and subdued." And, while she admits that items from the mid- to latter-half of the 20th century continue to be hot, she says that older, more established areas of collecting are beginning to gain back some ground. "Thrifters and pickers are starting to look at Victorian items, and we're also beginning to see a real uptick in the demand for more formal pieces from the Georgian period as well." Shole says that if anything, 2019's poll clearly demonstrates that there's a new breed of buyer who's willing to step beyond the traditional collecting boundaries that have been a staple of the industry for the last 20 years. "Whether or not this amounts to a tsunami of change or a trickle remains to be seen," says Shole, "but either way, it's a nice starting point for some old favorites.
For readers wanting to view the full results of the school's 2019 survey, visit www.asheford.com/2019-survey-results.html.
To learn more about the antiques and appraisal study program being offered by the Institute, email asheford@mail.com or visit www.asheford.com. 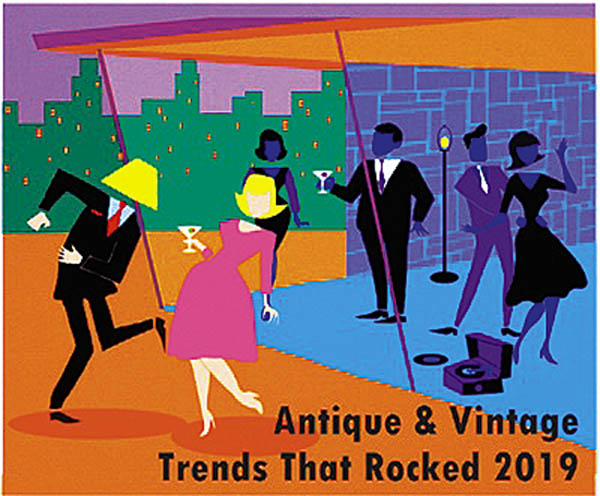