Whats that?
The first-time visitor was pointing to a colorful ceramic hanging above our kitchen stove. Depicted was a smiling, blond-haired young girl, with a bow under her chin, and flowers at each ear. Her oversize plaid hat was open at the top.
Thats a wall pocket, I said.
Whats it for?
Well. . ..
Wait, dont tell me. You put flowers in it, right? Then it looks like the girl is wearing a flowered hat. Nifty! You just fill it with water, and youre all set!
Well, you could. But most old wall pockets leak. So unless you want a sopping carpet, filling one with water is probably not the best idea.
I know, its a planter! You fill it with dirt, drop in some seeds, and pretty soon that girls wearing a flowered hat!
Sure, you could do that. But dirt-filled wall pockets get pretty heavy. You might find your favorite crashing to the floor.
Huh. So its just kind of hangin around for folks to look at?
Right on the money. Since the 1920s, ceramic wall pockets have been just kind of hangin around, giving folks something to look at. Although they were certainly put to practical use at first, nowadays many are proudly independent, with just the occasional addition of plastic ivy or cloth carnations. No drips, no dirt. Just kind of hangin around.
From pioneer days onward, householders were hanging things on their walls--clothes, pans, guns--to save floor space in their tiny cabins. In Victorian era times, the term wall pockets had a different meaning than it does today. Victorian era pockets, usually of wood or wicker, hung in the parlor and were handy for storing papers, slippers, and other necessities. Angled metal pockets were hung in the spaces above in-vogue angled paintings and planted with trailing ivy.
The first pottery pockets were folk art pieces, dating from the late-1800s Shenandoah Valley. Their designs followed traditional vase motifs, featuring molded leaves and flowers. In the 1920s, ceramic pockets emerged, continuing as first-run favorites well into the 1960s. Prior to World War II, United States manufacturers competed for a market share with imports from Japan, as well as pockets from Czechoslovakia, Germany, England, and Italy. During the war, U.S. manufacturers had the domestic market to themselves. After the war, however, the return of less-expensive Japanese pockets led to the demise of many American firms.
Almost every mid-century ceramics manufacturer of note (among them Royal Copley, McCoy, Shawnee, Hull, and Roseville) tried its hand at wall pockets, or such variants as string holders, blade banks, and holy water fonts. Some, such as Roseville, stuck with traditional floral/leaf decoration. Others let imagination run rampant: children, courting couples, kittens, pheasants and a grocery-carts-worth of fruits and vegetables. Pairs proved especially popular.
Pockets by the California Cleminsons ruled the kitchen. Down-to-earth mottos (The kitchen is the heart of the home) and familiar shapes (tea kettles, bellows, etc.) were intended to warm the cockles of even the hardest hearts. Others companies played it safe, releasing ceramics that could be used for either wall or shelf decoration. Hanging holes in the back of various Royal Copley and Hedi Schoop ceramic pieces made them ideal for wall pocket duty. When the mood shifted, flat bases meant they could be safely placed on shelves. Ceramic Arts Studio had it both ways: its Manchu & Lotus free-standing Asian head vases were also released as hanging wall pockets.
Pockets are easy to tuck into the home. Theyre small (most under 8 inches high); inexpensive (most well under $100); and easy to place (veggies in the kitchen, sailfish in the bath). Practical sorts can put pockets to their original use, filling them with artificial greenery. They can even earn their keep as pencil holders and storage slots for letters.
Or, you can collect wall pockets simply because theyre fun to look at. . . just hangin around.
Photo Associate: Hank Kuhlmann.
Photos by Donald-Brian Johnson, except as noted.

Donald-Brian Johnson is the co-author of numerous books on design and collectibles, including Postwar Pop, a collection of his columns. Please address inquiries to: donaldbrian@msn.com. 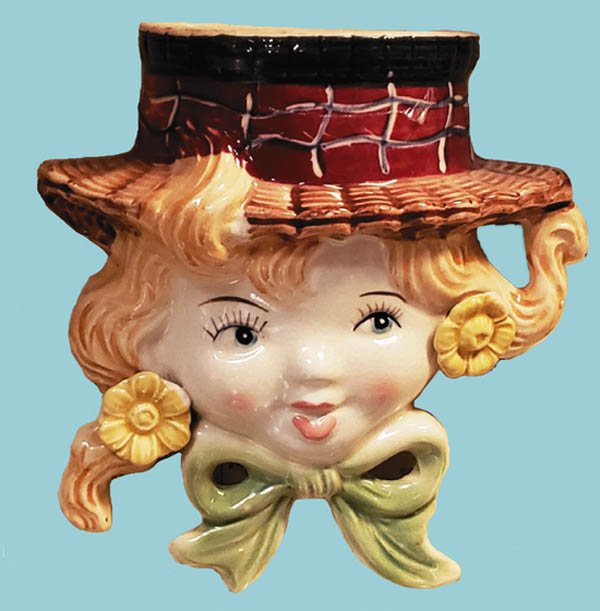