Let It Snow! Those Sensational Snowglobes

Rosebud....
And with that muttered word, the classic movie Citizen Kane opens. As publisher Charles Foster Kane (Orson Welles) breathes his last, a snowglobe falls from his hand and smashes on the floor.
Most globes, fortunately, lead a happier existence. Glass (and later, plastic) fluid-filled snowglobes (aka waterglobes, waterballs, snowdomes, snowscenes, snow shakers, or blizzard-weights), with their picturesque interior scenes and all those swirling flakes, have been delighting us for over 140 years.
The first documented appearance of a snowglobe was at the Paris Universal Expo of 1878. According to the Expo report, the globe depicted a man with an umbrella, attempting to protect himself against a snowy onslaught. It wasnt until 1900, however, that the first globe patent was issued, to Erwin Perzy of Vienna.
A developer of surgical equipment, Perzys original goal was to come up with better reflective material for his Schusterkugel, a flask filled with water used to focus light during surgery. A snow-like effect occurred when the flask, filled with fluid and the new reflective particles, was shaken. Inspired, Perzy set up shop as a still-in-operation-today snowglobe manufacturer. (That Citizen Kane globe was a Perzy.)
America had to make do with imports until 1927, when Joseph Garaja of Pittsburgh was granted a domestic patent for his innovation: snowglobes assembled underwater, to assure that they were completely filled, with a tight seal.
The recipe for what exactly went into a snowglobe remained a closely guarded secret. The objective: To keep the snow whirling about as long as possible before sinking to the bottom. While original globes were water-filled, an eventual blend of water and glycerin or glycol helped the flakes make a lazy descent. Even better, the antifreeze-like mix kept the fluid from turning into a soon-to-shatter iceball.
Modern snowglobe snowflakes are mostly white plastic, but over the years a variety of substances have been tried: bone chips, porcelain bits, sand, sawdust, ground rice, and even soap flakes. Some were well-suited to a snowglobes theme: tiny blue foil bats for a Halloween globe, and gold glitter for one starring Liberace.
While frosty figural themes, from jolly Santas to top-hatted snowmen, are a snowglobe staple, much more has been captured within them. Snowglobes celebrating scenic attractions and vacation destinations have remained tourist favorites since the 1940s, whether of Niagara Falls or Bermuda. There are globes geared to such pop culture favorites as Batman, Mickey Mouse, and Davy Crockett. Looking for a snowglobe for your favorite golfer? One for Valentines Day? A snowy salute to the Last Supper? Youll find them all, somewhere amongst the 32,000-plus globes listed daily on eBay. Youll even run across the occasional gotta-have-this oddity: a snowglobe promoting Crown Termite Control (featuring an interior crown, naturally), or one with a suspended faucet, labeled: Turn off excess secretion of gastric acid with Nacton. And, your day will be brightened considerably if you encounter a globe with a mass-produced foul-up: a bald bathing beauty, for instance, or the Eiffel Tower, mistakenly labeled Souvenir of Puerto Rico.
Todays snowglobes take many forms. There are flat-bottomed plastic ovals (reportedly inspired by the view out the back window of a Volkswagen Beetle, and unfortunately prone to evaporation and cloudy liquid). There are mechanicals, which light up, incorporate music boxes, or even swoosh the snow around at the touch of a button. There are figures built around snowglobes (Santa with a toy shop tummy globe). There are even those huge outdoor inflatables. Interior globe lights illuminate showers of polystyrene pellets cascading around nylon figures.
Most vintage snowglobes remain extremely affordable: under $15 for plastic, and under $50 for glass (for imports and Disney globes, plan on adding more). So the next time youre snowed in, check out some of those 32,000 listings. Like Charles Foster Kane, the dreamy allure of snowglobes may transport you back to your childhood. Just dont drop one. Oh, and dont drink the water.
Photo Associate: Hank Kuhlmann.
All photos by Donald-Brian Johnson. 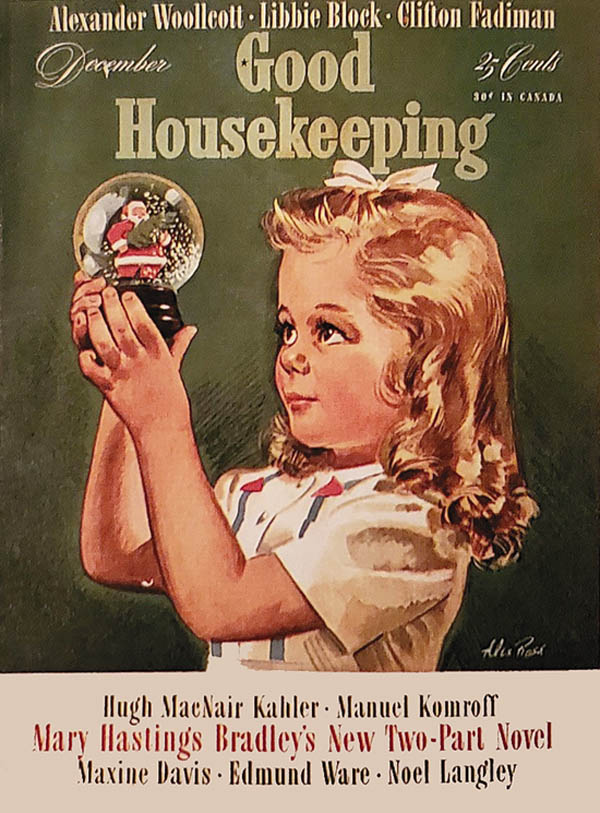