The Board of Trustees of Winterthur Museum, Garden and Library recently voted unanimously to honor two longtime leaders with emeriti status in honor of their remarkable careers.
Linda Eaton has been named Senior Curator Emerita of Textiles in recognition of her leadership at the institution, her great curatorial experience, and her vast knowledge of textile history. Eaton retired as the John L. and Marjorie P. McGraw Director of Collections and Senior Curator of Textiles on Dec. 31, 2020, after 30 years at Winterthur.
Gregory Landrey has been named Senior Conservator Emeritus of Furniture in recognition of his leadership at the institution, his experience as a conservator and professor, and his international influence on the field of conservation. Landrey retired as Dwight and Lorri Lanmon Director of Academic Affairs on Jan. 23, 2021, after 41 years at Winterthur.
After so many years of devoted service to Winterthur and contributions to their fields, neither Linda nor Greg deserve anything less than the highest of honors, said Carol B. Cadou, the Charles F. Montgomery Director and CEO of Winterthur. Each of them has contributed mightily to Winterthur and our field, to the leadership of our institution in good times and bad, and to the future, with their dedication to the students and scholarship emanating from our graduate programs. We are grateful for their deep commitment to our mission and their many accomplishments that have helped Winterthur to maintain a preeminent position in the field.
Eaton has curated many scholarly and successful exhibitions at Winterthur, including Treasures on Trial: The Art and Science of Detecting Fakes; Embroidery: The Language of Art; and Betsy Ross: The Life Behind the Legend, co-curated with Dr. Marla Miller. She was also an instrumental partner in one of Winterthurs most memorable exhibitions, Costuming The Crown, in 2019.
Eaton is recognized around the world for her leadership in the field of interdisciplinary textile scholarship. Her publications include Quilts in a Material World: Selections from the Winterthur Collection (2007), and Printed Textiles: British and American Cottons and Linens, 17001850 (2014), a revision of Florence Montgomerys seminal 1970 book. Eatons latest publication, Erica Wilson: A Life in Stitches, co-authored by Anne Hilker, was released in December 2020.
A specialist in textile conservation as well as textile history, Eaton has shared her knowledge and expertise through teaching hundreds of graduate students in the Winterthur Program in American Material Culture (WPAMC) and the Winterthur/University of Delaware Program in Art Conservation (WUDPAC). She has also lectured widely to broad audiences, including the loyal following of her beloved needlework conferences.
Eaton trained at the Textile Conservation Centre and the Courtauld Institute of Art before working for the National Museums of Scotland. She arrived at Winterthur in 1991 as a textile conservator, became curator of textiles in 2000, and was promoted to director of museum collections and senior curator of textiles in 2009. Eaton was named the John L. and Marjorie P. McGraw Director of Collections in 2012. A curator of textiles position was recently created in her name.
Landrey joined Winterthur in 1979 as assistant furniture conservator and as affiliated professor in the Winterthur/University of Delaware Program in Art Conservation. He served as the head of the furniture conservation laboratory 19861995 and as director of conservation 19952006. Since then, Landrey has served as director of Academic Affairs, a position named for Dwight and Lorri Lanmon in 2013. During his 41-year tenure, Landrey has trained and mentored hundreds of graduate students in both WPEAC/WPAMC and WUDPAC and will continue in his role as affiliated professor after his retirement.
Landreys practical experience began at age 16 as a cabinet shop assistant for Corner Cupboard Antiques in Strafford, Pa., where he built and restored furniture under the tutelage of David Sloan. He worked at Corner Cupboard Antiques for seven years, serving as cabinet shop manager for the last two. In addition to his bench training, Landrey attended Gettysburg College, graduating with a bachelors degree in history in 1977 under the guidance of Dr. Charles H. Glatfelter. In 2007, the Getty selected him to participate in the Museum Leadership Institute program.
Landreys expertise and research includes nonprofit leadership, administration, collections care, the history of Winterthurs museum rooms with a focus on historic furniture and architecture, the preservation of historic furniture coatings, the techniques of traditional cabinetmaking, and historic automobiles, specifically Cadillac and Rolls-Royce motor cars. He was a primary contributor to Conservation of Furniture (2003), a seminal Butterworth-Heinemann publication. Since 2013, Landrey has worked with the World Monuments Fund, the Palace Museum, and Tsinghua University in Beijing, China, as an advisor to CRAFT (Conservation Resources for Architectural Interiors/Furniture and Training) to train Chinese students and professors in conservation according to international standards. He served as conservator in residence at the Palace Museum for two semesters (fall 2014 and spring 2019) and has stewarded the Winterthur/University of Delaware partnership with CRAFT, strengthening Winterthurs international profile and recognition of its world-class collections and graduate programs.
Winterthur, located on Route 52, six miles northwest of Wilmington, Del., and five miles south of U.S. Route 1, is closed on Mondays (except during Yuletide) and on Thanksgiving.
For additional information, including special services, call 800-448-3883, 302-888-4600, or 302-888-4907, or visit www.winterthur.org. 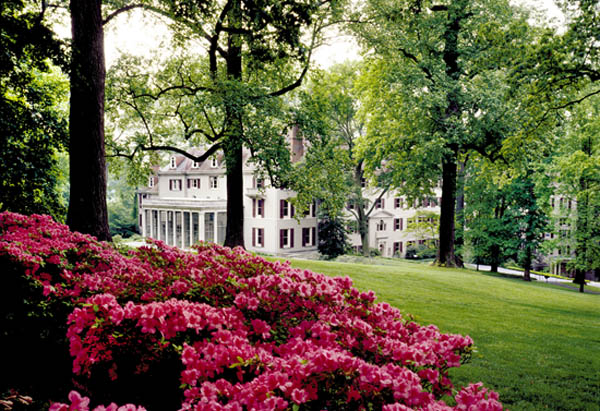