One of the Northeasts favorite destination events for antiquing, Madison Bouckville Antiques Week, returned after the one-year absence with as big of a total week of events as ever, according to Jim Dutcher, spokesman and producer of the weeks largest, Cider House Antiques Show. The 49th Antiques Week, in these two small villages of Central New York, gathered on Aug. 16, about 1,500 exhibiting dealers setting out their collections on a score of fields and front yards awaiting the many thousands of shoppers for the official dates of the show, Tuesday through Sunday, Aug. 17 to 22.
Weather on Monday was balmy and bright, so shoppers knowing there was no admission on any field arrived in droves. Sales began that afternoon while the exhibitors were trying to unload and set up their areas. Selling was so hectic shoppers were taking pieces off the trucks, trailers and vans to buy. One gentleman was looking at several 19th century quilts at the Out Front Show Field. As he put one down, another shopper picked it up wanting to buy it. The first fellow then had to commit to buying it on the spot while holding another piece for consideration. He bought the second one as well.
Shopping and selling continued at a good pace all week in spite of daily rain. The rain didnt deter customers at all throughout the week. The only problem was keeping the parking areas navigable because many of them turned to mud. To cope with that we had to truck in gravel in the low places, but even so we had great crowds, and many dealers said sales were terrific, said Jim Dutcher.
Bob and Cheri Charboneau, Honeoye Falls, N.Y., were having a very good time at Cider House all week. On that Monday while setting up their space, Bob was doing the heavy lifting while Cheri sold numerous pieces, he said. Their offerings included 19th-century furniture from New York sate and quilts.
Ds and Dos Antiques, Weedsport, N.Y., was also selling well, including several early tall cupboards as well as later furniture. Possibly a J. W. Fiske weathervane from the Hudson Valley was offered by Westerlo, N.Y., dealers Susan and Dennis Francher.
Madison Bouckville Week is considered by many shoppers as the place to find fresh antiques and collectibles. Bob Hassfeld, Ocean Port, N.J., had just that setup: simple, no frills tables loaded with his finds, including hundreds of antique tools, decoys, fishing tackle and more.
From Chittenango, N.Y., Len Purdy brought two Whizzers, Schwinn bicycles from the late 1940s which were modified with the addition of small gasoline engines, making them into motor bikes.
Oak and maple furniture is popular here, as much of it was built locally. Dan Almerinder of Rochester, N.Y., was selling his inventory, which was for the most part restored or refinished. Very large drawer cabinets in his booth were originally made to store architectural and engineering plans. Today, they often sell to art galleries, he said.
The variety at these fields is vast. For example Tom and Dorine Nagy, Chelsea Hill Antiques of Hampton, Conn., used a large tent with portable walls. Their exhibit at the Out Front Show Field was filled with furniture from as far back as Tudor and forward to Georgian and Victorian eras, and fine art as well.
East Expo, another of the fields, has tents filled with early American country antiques. Dan Freeburg was selling furniture and accessories found near his Wilcox, Pa. home. He sold a large blue milk painted stepback hutch, ca. 1800, a mustard painted dry sink, a mustard-colored bucket bench, along with some of his stoneware and redware.
Bill and Kay Puchstein were exhibiting in a double space at East Expo. Kay reported great sales with furniture, including a hired mans bed, a lazy susan table, baskets, stoneware, textiles including quilts, and some novelties.
Next year will be celebrated as the 50th anniversary of this event with special promotions. Information is available at www.Madison-Bouckville.com.
To contact the Cider House Show field, call 315-825-8477; the Out Front Show field, 315-427-5094. 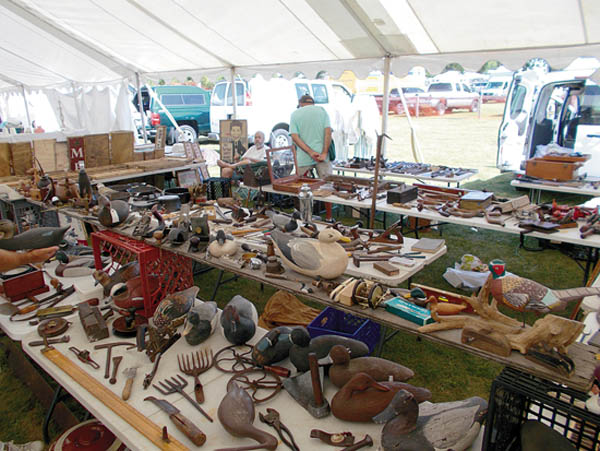