The Metropolitan Museum of Art recently announced that it will unveil a new installation of two eighth-century Maya stone monuments, known as stelae, in its iconic Great Hall. The unveiling took place Sept. 2. The two massive stelae, both significant long-term loans from the Republic of Guatemala, feature life-sized representations of influential Indigenous American rulers: a king, Kinich Yonal Ahk II (ca. A.D. 664729), and queen, Ix Wak Jalam Chan (Lady Six Sky) (ca. A.D. 670s741), one of the most powerful women known by name from the ancient Americas. The installation heralds the upcoming exhibition Lives of the Gods: Divinity in Maya Art, which is scheduled to open in fall 2022 and will highlight Maya visual narratives featuring a cast of gods, sacred beings that are personified elements of the cosmos, nature, and agriculture. The Great Hall display is also the first in a series of special exhibitions and installations that will present art of the ancient Americas, sub-Saharan Africa, and Oceania throughout The Mets galleries while the Michael C. Rockefeller Wing is closed for a renovation project that will reenvision these collections for a new generation of visitors.
This is a transformational moment for The Met's Great Hall: The ancient Hellenistic sculpture of the goddess Athena that has presided over the space leaves as Lady Six Sky, a queen from the ancient Americas, arrives to be prominently displayed alongside a life-sized representation of a second influential Indigenous American ruler," said Max Hollein, Marina Kellen French Director of The Met. "The Metropolitan Museum of Art is honored to collaborate with our friends and colleagues in the Republic of Guatemala on the celebration of these most important and exceptionally beautiful Maya monuments. As a museum of the world and for the world, it is a great privilege for The Met to share these masterpieces with the thousands of visitors who walk through our Great Hall each day. They are also there to highlight the extraordinary visual culture of the ancient Maya, which will be featured in our upcoming Lives of the Gods exhibition next year, and in the completely renewed display of works from ancient Americas set to open when the Michael C. Rockefeller Wing renovation is complete in 2024.
Both stelae will remain on view in the Great Hall until 2024. As part of the long-term collaboration, two additional works from the Republic of Guatemala will be treated by The Mets conservation team alongside conservators from Guatemala.
These stelae are ambassadors for one of the worlds great visual traditions, embodying layered cultural meanings and introducing the legacy and rich histories of two Indigenous leaders, said James Doyle, the curator of the installation and assistant curator of Ancient American Art in The Michael C. Rockefeller Wing. This display truly reflects the fruitful partnership the Museum enjoys with the Ministry of Culture and Sports and the National Museum of Archaeology and Ethnography in Guatemala and highlights the important ongoing archaeological projects and preservation efforts led by our colleagues in the Maya region.
Felipe Aguilar, Guatemalas Minister of Culture and Sports, commented, "Guatemala is a country with a cultural wealth of more than 3,000 years of history. My vision as Minister of Culture is that the culture of Guatemala transforms into an engine of economic development for all Guatemalans." The Republic of Guatemala is celebrating its bicentennial of independence in 2021.
The Met has collaborated with the Republic of Guatemala on several loans for both special exhibitions and long-term view, including the portrait of a seated ruler receiving a noble (Stela 5), which has been on view at the museum since 1982 in Gallery 358 in the galleries for the Arts of the Ancient Americas, as well as the recent loan of several important jade and shell works for 2018s Golden Kingdoms: Luxury and Legacy in the Ancient Americas. In 1968, The Met also hosted the exhibition Maya Art from Guatemala, which presented recently excavated highlights of Maya sculpture from the national collections, and in 1970 the museums centennial exhibition Before Cortés: Sculpture of Middle America featured a major loan of works from Guatemala. The upcoming exhibition Lives of the Gods: Divinity in Maya Art will feature additional loans from Guatemala and is organized with the Kimbell Art Museum, Fort Worth, Texas.
About the Works
Artists in first-millennium Maya royal courts created these enduring portraits of their patrons, who ruled over what is now southern Mexico, Guatemala, Belize, Honduras, and El Salvador.
Portrait of a queen regent trampling a captive (Stela 24), by unrecorded Maya court artists from Saaal (Naranjo, Guatemala), features one of the most celebrated female leaders from the ancient Americas, Ix Wak Jalam Chan (Lady Six Sky). Ruling as regent in place of her infant son, she led military campaigns to conquer neighboring cities. Portraying her with a captive underfoot and impersonating a goddess, this stela, made of limestone, represents her triumph and power. With this portrait, she emphasized both her strategic prowess in warfare and her divine right to rule.
Portrait of a seated ruler receiving a noble (Stela 5), also carved by unrecorded Maya court artists, from Yokib (Piedras Negras, Guatemala), depicts the king, Kinich Yonal Ahk II, who ruled the urban center of Yokib for more than 40 years. He commissioned his royal sculptors to create a row of monuments, including this stela, at the base of the citys palace complex in a gesture to assert his power. The king is portrayed in a supernatural moment, enthroned as deities emerge from the jaws of a living mountain overhead. After his death, Kinich Yonal Ahk II was buried near the monuments in the richest tomb discovered at Yokib.
Further reading on the loans can be found in an article by curator James Doyle on The Mets website, and in wall texts throughout the installation in the Great Hall.
To learn more, visit www.metmuseum.org. 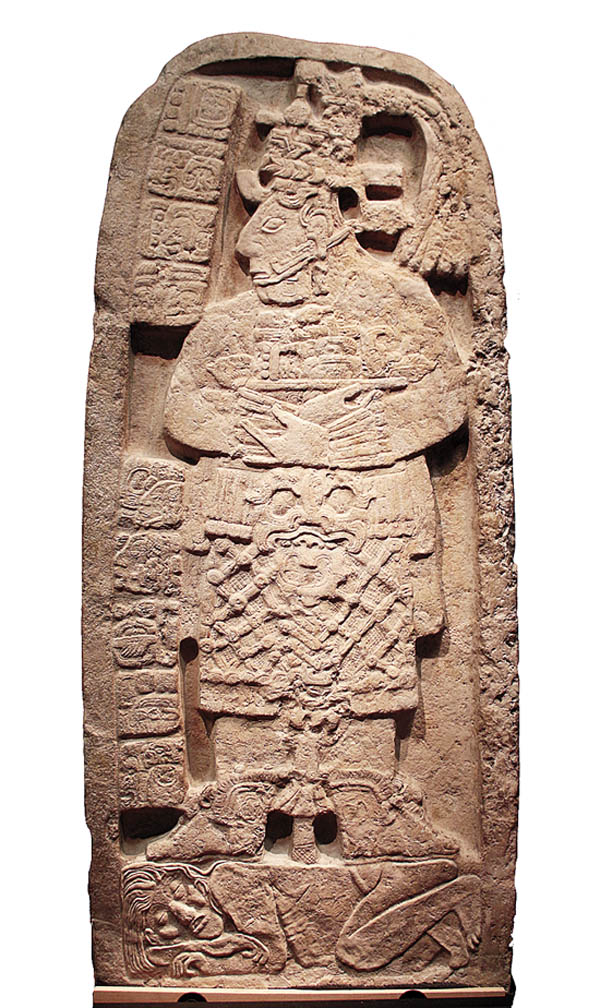