Milestone Auctions continues to increase its bidder base and market share, as evidenced most recently by their successful Premier Firearms sale on Nov. 2. There was strong international interest in the 830 lots of high-quality modern-era handguns and long arms, as well as big-caliber and antique guns and rifles, many from the Civil War era.
There wasnt any one particular top gun in this auction, there were highlights in all of the various categories, said Milestone Auctions co-owner Chris Sammet. For this event, we focused on accessibility and offered as wide a variety of clean, desirable firearms as possible. There were some great Colt models and the largest selection of Winchesters ever cataloged in a single Milestone sale. It seemed to us that very few collectors, if any, left the auction disappointed.
Leading the list of prices realized was a near-mint unissued Whitney Model 1861 U.S. Navy rifle. The .69-caliber gun featuring a large eagle-and-flag motif on its lock and 1863 on its barrel came with a bayonet made by Collins & Co., of Hartford, Conn. It reached its pre-sale estimate range, settling at $6,000.
A high-condition Smith & Wesson 2nd Model Schofield .45-caliber revolver, U.S. issued during the Indian Wars era, was one of fewer than 6,000 of its type produced in 1876 and 1877. The survival rate of original Schofield revolvers remains very low, given a large majority were purchased from the government by Wells Fargo, which had the barrels shortened and stamped with the companys logo, said Sammet. The auctions scarce original-state gun sold for an above-estimate $5,760.
The highest-priced Colt in the sale was a high-condition Model 1878 six-shot double-action revolver designed to use a .44-.40 cartridge. Although the double-action revolver had been popular in England since before the Civil War, it was a novel idea in America, and gun makers feared the public would not like the change. But they were wrong, Sammet said. Both the small-frame Model 1877 and large-frame Model 1878 went on to become very popular out West and in the East, as well. The example in Milestones auction, which was made in 1893, sold at the midpoint of its estimate range for $4,560.
A high-quality .223-caliber Israeli Galil semiautomatic rifle, which was imported into the United States prior to the permanent ban effected in 1989, came with a magazine and cleaning kit. After 15 bids, it sold within estimate for $2,880.
Several novelty firearms caught the attention of bidders, including a circa-1850s E.M. Reilly (London) .32-caliber air-powered cane gun designed to shoot lead balls. Presented in its original felt-lined, partitioned oak case with the dealers trade label affixed inside the lid, it surpassed expectations at $3,120. Another intriguing item was an 1850s wood sewing case with a pincushion top that opened to reveal what was in actuality a false bottom. Hidden away in the cavity below was a 4-inch-long, .22-caliber Derringer. Accompanied by a partial cardboard box of Clinton .22 short ammunition, the Derringer sewing case sold for $1,920, nearly four times the high estimate.
Yet another unusual firearm was a U.S.-made Model FP-45 Liberator .45-caliber single-shot pistol. Produced solely in 1942, it was cheap and easy to mass-produce because it had only 23 mostly stamped and turned steel parts. The Liberator pistol, which could accommodate five extra rounds of ammunition in its pistol grip, was intended for use behind enemy lines by resistance fighters wanting to quickly overtake an enemy and seize his gun. It was not intended for long-term use, Sammet explained. Estimated at $800-$1,200, the gun offered by Milestone sold for $2,040.
Winchester collectors were charmed by a huge (37.5-by-55-inch) cardboard three-panel ad produced in 1924, following the competitive shooting season of 1923. Richly colorful, it depicts shooters in military garb, trap shooters armed with Winchesters Model 12 slide-action shotgun, deer hunters with a Model 1894 rifle in a canoe, and a display of dozens of Winchester ammunition boxes. Bright and clean, the sign sold within estimate for $2,340.
To learn more, contact Milestones firearms expert, Dave Bushing, by calling 440-527-8060 or email info@milestoneauctions.com.
All prices quoted are inclusive of buyers premium as specified on Milestone Auctions website.
All images courtesy of Milestone Auctions. 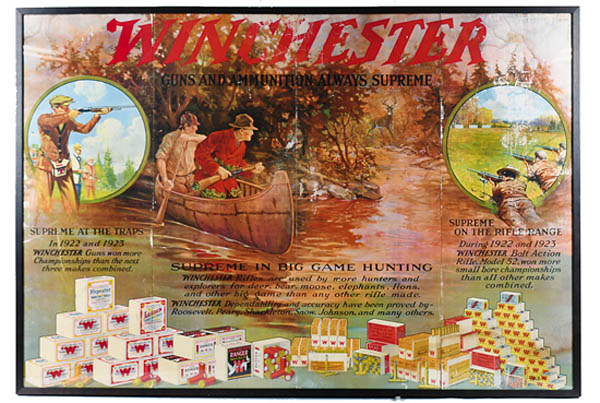