Model Steam Locomotive Of The Great Western Railway Locomotive And Tender Chugs Away For $15,340

Wheels in motion appealed to bidders at Miller & Miller Auctions Ltd.s back-to-back online auctions held Sept. 11 and 12, as a 7.25-inch gauge model steam locomotive of the Great Western Railway 4-6-0 locomotive and tender No. 1011 rolled away for $15,340, while an 1869 French style Boneshaker bicycle sped off for $10,620. Miller & Miller is based in New Hamburg, Ontario, Canada. All prices quoted are in Canadian dollars and include an 18-percent buyers premium. The Canadian dollar (CAD) currently converts to .79 USD.
Day one was a Toys and Nostalgia Sale, featuring the Bryan Beatty collection of toys and communication-related memorabilia, including a well-rounded offering of cast-iron and tin litho toys from the Victorian to the Atomic era. Beattys collection also included many radios, microphones and typewriters, with examples spanning the 20th century.
The second day was an Advertising and Historic Objects Auction, featuring the Scott Vanner breweriana collection. The finely engineered previously mentioned gauge steam locomotive was the expected day two headliner and was the auctions top lot. It was rebuilt and reboilered by F. West and Lee Green and came with a brazed superheated copper boiler with fittings and gauges.
The 1869 French style Boneshaker bicycle featured a painted iron frame, wood rims and restored wheels and had a rear brake that was activated by twisting the handlebars forward. It nearly tripled its $3,500 high estimate. Also, a Canadian 1897 Brantford Bicycle Company (Brantford, Ontario), fully restored mechanically and cosmetically, with original wood rims, handle bars and seat, a custom-made solid wood display stand and added stamped leather pouch, rang up $3,835.
Who says specialized collector auctions are the only way to drive top results? inquired Ben Lennox of Miller & Miller Auctions Ltd. Our auctions have showed that great results can be achieved in a highly diverse sale anchored around two solid collections and many different collecting categories. We pride ourselves in bringing objects of merit to the collecting world.
When I analyzed the results of the two-day September sale, Id never seen such a diversity in the collecting genres such as bicycles, radios, microphones, tin toys, graded comic books, cast-iron mechanical banks, toy trains, clocks, breweriana, signs and advertising, jukeboxes, coin-operated novelties, steam engines, gas pumps and even a Mickey Mantle autographed bat, continued Lennox. Were thrilled that people are taking notice and that so many collecting categories are hot. While advertising signs continue to achieve record results month after month, its exciting to see strong results across the board. Were still unable to host in-person sales, but our Miller & Miller bidding platform, plus LiveAuctioneers.com, attracts bidders far and wide.
The first session grossed $133,045 and the second, $323,792, for a total of $456,837, including the buyers premium. Day one had 311 bidders placing 5,437 bids, while 426 bidders placed 8,466 bids online on day two.
A Miller High Life Beer two-sided porcelain hanging sign, made in America in the 1930s and originally designed to accommodate bands of neon surrounding the perimeter, 35.5-by-46 inches, found a new owner for $7,670. Also, a Worth and Martin (Toronto) one-cent bulls head perfume dispenser (Take the bull by the horns!), made in 1902, solid brass with a glass mirror and able to accept large Canadian cents, 12 inches tall, with the original cashbox, made $5,900.
A Wurlitzer Model 1015 jukebox, made in America in 1946, among the most identifiable and iconic jukeboxes ever produced, this one is a fine functioning example that actually came loaded with 24 period rock n roll records, changed hands for $7,670, while a Wurlitzer 2500 model jukebox, made in America in 1961, an exceptional, functioning survivor example, hit $3,540.
Steam engines proved extremely popular with bidders. A few of the top performers included a Cretors & Co. No. 1 Popcorn Machine steam engine (American, 1906), designed to accompany Cretors popcorn vending machines, decorated to attract customers at fairs and other social events, made of cast iron, brass and copper, professionally painted, which realized $5,605.
A highly detailed scale model of the steam engine that ran machinery for the Dominion Organ & Piano Co. (Bowmanville, Ont., Canada), built by R. Fishleigh in 1890, sold for $5,015. A model horizontal twin steam mill engine (American, 1890s), made of solid brass and painted, mounted to a fitted walnut base, an exceptionally high-quality live steam model featuring twin cylinders and a reverse-action switch, with a refinished base, brought $4,425.
A Wayne Model 60 American-made Chevrolet gas pump from the 1940s, 92 inches tall and professionally restored to Chevrolet, including paint and reproduction globe lenses, went to a dedicated man cave enthusiast for $5,605. Also, an ECO Islander model 242 air and water station made in the USA in the 1950s, a complete original example of mid-20th century petroliana, with a cast body and porcelain globe, a candidate for restoration, 53.5 inches tall, brought $4,425.
A Molsons Beer clock, made for the French-Canadian market in the 1930s, porcelain with a screened metal clock dial marked Made in Germany, one of very few porcelain advertising signs appointed with high quality mechanical clocks, finished at $5,605. Also, a Molson Ale & Porter porcelain corner sign, made in Canada in the 1930s, designed for mounting to the exterior corner of a building (or post), 48 inches in height by 10 inches wide, sold for $4,425.
An English 1913 J. Smith & Sons tower clock having a cast-iron frame with steel components, rescued and restored after the post office building it served in Bowmanville, Ontario, from 1912-65 was torn down, having a cast-iron 48-inch diameter dial set with milk glass panels, intended to be backlit, mechanically functioning, and with a 60-inch-long pendulum, realized $3,540.
To learn more, call 1-833-662-4800 (toll-free) or visit www.millerandmillerauctions.com. 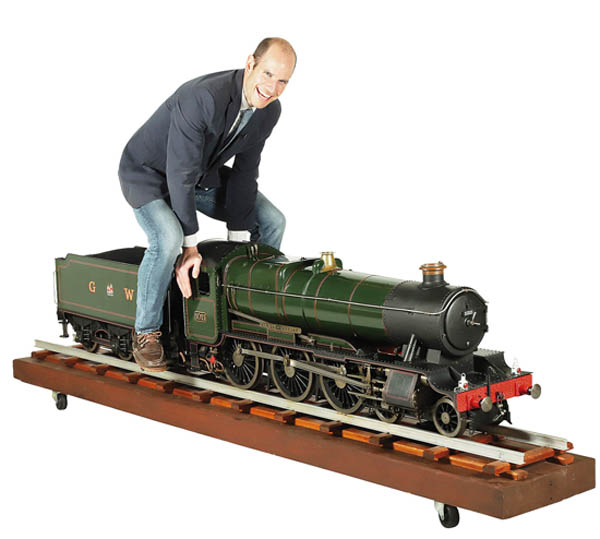