Morphy Auctions has sold the Dutch flintlock musket that fired the first shot at the 1775 Battle of Bunker Hill for $492,000. Arguably the most significant, positively identified Revolutionary War long arm in existence, the .79-caliber gun was originally the property of Private John Simpson (1748-1825) of Deerfield, N.H., and had remained in his family by direct descent for the past 244 years. The price includes buyers premium, and the sale took place on Oct. 23.
As history recounts, Simpson fired an unauthorized first shot as the Redcoats advanced on Breeds Hill (erroneously reported as Bunker Hill) against the order of Col. William Prescott, who instructed colonial troops, Dont shoot until you see the whites of their eyes!
The Simpson gun symbolizes one of the most important battles leading to American independence and came to auction with impeccable family provenance and supportive documentation, said Morphy Auctions founder and president, Dan Morphy. Bidders knew there was no question about this famous guns background and authenticity.
The buyers identity has not yet been released.
Image courtesy of Morphy Auctions. 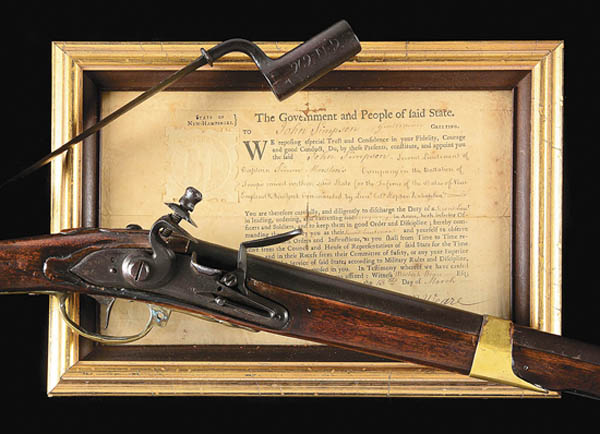