In the 1940s New Zealanders were avid moviegoers, second only to Americans in the number of times they saw a movie each week. If World War II kept imports of American film magazines out of the country, New Zealanders had their own to keep them informed about their favorite stars and the new pictures coming to their local theaters.
The era was dominated by Filmland and Screen Parade, two monthly rivals that would end up as one magazine in the early 1950s. Neither title had the color plates of the American fan magazines, although full page movie adverts, pictorial spreads, fashion pages and candids were found in their pages, as they were in U.S. magazines.
Their competition included the imported English weeklies, Picture Show and Picturegoer, which were published fortnightly during the war, and in the early post World War II period Australian editions of Photoplay and Motion Picture came on sale. The Australian Photoplays contained content Americans had read five to six months before.
Filmland was the established New Zealand movie magazine when Screen Parade debuted in August 1944. The older magazine began life as New Zealand Theatre and Motion Picture in December 1920.
Acknowledging that silent pictures belonged in the cinematic past, editor/publisher Frank Millar changed the name to NZ Talkies and Theatre from the January 1931 issue, and retained it until March 1940 when NZ Talkies became Filmland. After noticing the new name, the next thing readers would have seen was the increased price of sixpence (5 cents) per copy.
Filmland had less content than its predecessors, and it was now printed on newsprint, with issues averaging 20 to 24 pages. World War II paper shortages even saw them appear with bright green, blue or pink pages. However, the covers always remained glossy although the art paper inserts of its pre-war incarnations had gone.
Film companies then had their New Zealand offices in Wellington, the country's capital, where Millar would call regularly to collect copy and photographs. After the change of name to Filmland, he continued his association with Ferguson & Osborn, sticking with the printing firm that had produced the previous versions of his magazine.
Frank Millar died on Sept. 4, 1944, several days after he suffered a brain hemorrhage while speaking at a meeting. His widow, Winnie, assumed the role of Filmland's editor, moving the magazine's office from Customhouse Quay in the central city to the family home in Overtoun Terrace, in the Wellington suburb of Hataitai.
Mrs. Millar appears to have edited the magazine until post World War II conditions enabled her to sell the publication. The November 1947 issue was the last she edited. F.J. Whelean purchased the magazine, and readers noticed gradual changes until the smaller quarto-size page format came in June 1948.
By early 1950, the magazine was being printed in Auckland by Abel Dykes Limited, publishers of Screen Parade, for the proprietors of the Filmland Company. Filmland appears to have ceased publication with the November 1950 issue. From February 1951 the magazine was incorporated with Screen Parade.
From the start, Screen Parade was always quarto size and printed on better quality paper than Filmland. It was definitely the superior product for both content and appearance; illustrations were clearer reproductions, with the covers showing less wear from handling.
But these improvements came at a price. The magazine cost one shilling and sixpence (15 cents), three times that of its rival, Filmland.
Readers got 64 pages for their money at the magazine's peak, which included full page portraits, articles on both stars and character players in the new releases, and news from British and American studios from regular columnists.
MGM advertised regularly on the inside cover page, and its product received much greater coverage than the minimal attention from Filmland under the Millars editorship.
More non-film-related advertisements also appeared in Screen Parade. They were aimed at what was a predominantly female readership, with the latest in cosmetics, shoes, fashions, swimwear, undergarments and stockings featured.
Screen Parade invited its readers to vote for New Zealand's favorite stars, with the results published in February 1945. Greer Garson topped the poll, followed by Betty Grable and Bing Crosby. The results favored the same stars again in 1946, although Grable and Crosby swapped places this time.
While George Montgomery was the cover star on the first issue in 1944, the magazine's editorial policy leaned heavily toward female cover stars because those issues with male covers apparently did not sell as well.
By 1951 Screen Parade had 48 pages. Illustrations became larger and fewer, as did the number of articles on individual stars and films. Profiles of New Zealand radio personalities had been added, along with a page on television despite it not arriving in the country until 1960.
Sixty years on, the last issues of Screen Parade have the appearance of a magazine cost-cutting while maintaining its price in an effort to retain a dwindling readership.
The marriage of Screen Parade and Filmland lasted nearly four years. Screen Parade ceased publication with the November 1954 issue, leaving New Zealanders without a locally-produced movie magazine until the introduction of Cinema, Stage & TV in June 1956.
Today some may think of Screen Parade and Filmland as being quaint. They come from a conservative era when New Zealand's population was around two million people, making their collecting appeal that of rarity rather than value.
Both magazines occasionally turn up on eBay or TradeMe, a New Zealand Internet auction site, and just as infrequently in the country's second hand book and curio shops. While Filmland is the more scarce title, the magazines are usually found in less pristine condition than Screen Parades. An otherwise mint cover on both magazines can be spoiled by a bookseller's stamp or the name of the original owner written in ink, reflecting New Zealanders' habits of the 1940s. A current estimated price for both magazines would be from $5 to $10 upwards, with condition, the collectibility of the cover star and the content affecting what a collector is prepared to pay on that given day. 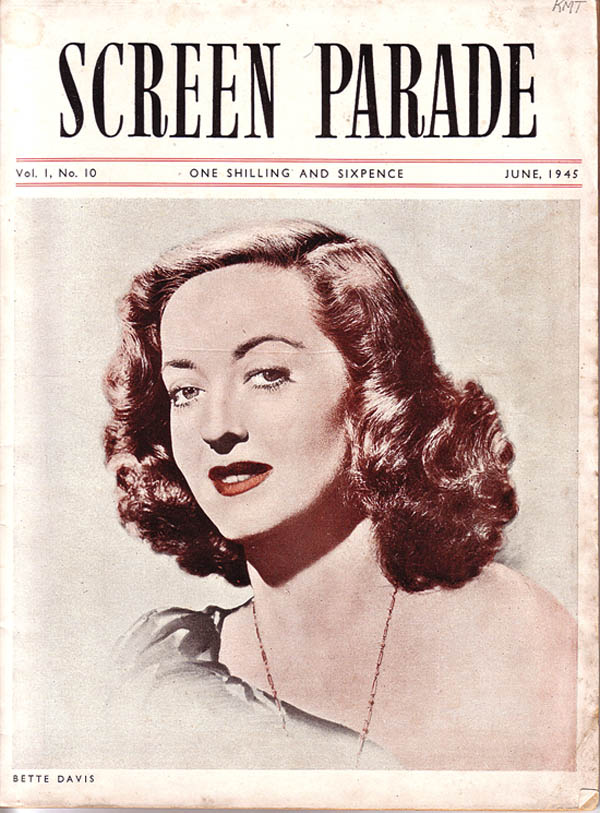