Just in time for Halloween, Nye & Companys Wednesday, Oct. 30, Estate Treasures Auction will have plenty of treats. The trick will be to get your bids in before its too late, said Nye & Company spokesman Andrew Holter. The sale features items for just about everybody and every taste, whether it be traditional or modern. This auctions got it all.
The sale will be held online as well as in the Nye & Company gallery at 20 Beach St. in Bloomfield, N.J., starting at 10 a.m. Eastern time. The catalog is available on the Nye & Company website (www.nyeandcompany.com) and via the platforms LiveAuctioneers.com and Invaluable.com. Phone and absentee bids will be accepted.
For those who like sparkling objects, there are approximately 30 pieces of fine jewelry from a prominent New Jersey estate, including two large carat solitaire diamond rings. Coming from another collector is a rare and attractive Breguet stainless steel triple calendar wristwatch with moon phases and champagne dial. The watch is one of a handful of similar watches with these features from the early 1950s.
Also offered will be Part III of the Myrna and Bernard Posner collection of silver and objets de vertu. Highlights include a large selection of Chinese, Indian and Persian figural pieces of silver, as well as more traditional English and American works. The Posners silver collection consisted of objects that crossed all time periods and varied from decorative objects to more utilitarian pieces.
The decorative arts and furniture categories start in the late 17th and early 18th century with a terrific figured maple and birchwood ball foot chest of drawers, probably crafted in Newport, R.I. The chest appears to retain its original ball feet, which is a remarkable survival.
Also being featured is a terrific early 18th-century hutch chair table coming from the well-known collection of the estate of Eric Martin Wunsch. Wunsch was an early and highly respected collector of early American furniture, silver and Old Master Paintings. Also from the Wunsch collection are a few rare cast-iron firebacks and stove plates from Pennsylvania and New York.
Additional highlights include a pair of Bennington flint glazed lions formerly in the collection of Claire and Hugh Vanderbilt, Sr., a pair of paint-decorated tole wall sconces with original candle snuffer, an 1806 stoneware flask by John Crolius (N.Y., 1733-1812), and a paint-decorated fireboard depicting a coastal whaling scene, probably done in Massachusetts in the 19th century.
Items made and designed in the 20th century will include a pair of Art Deco andirons designed by Jacques Adnet, while fans of Mid-Century Modern pieces will be treated to a Hans Wegner oak hammock chaise lounge, a set of eight 1950s dining chairs designed by Eero Saarinen for Knoll, and a seagull chair and ottoman by Gosta Berg and Stenerik Eriksson for Fritz Hansen.
Wonderful fine art will feature two superb works by Julian Onderdonk (Texas/New York, 1882-1922) and two fantastic Impressionist Paris street scenes by Antoine Blanchard (French, 1910-88). Onderedonk was an Impressionist artist who is often called the father of Texas painting. Blanchard (born Marcel Masson) was an enormously popular painter of Parisian streetscapes.
John Nye had a long and fruitful career at Sothebys before he and his wife, Kathleen, acquired Dawsons in 2003 and started Dawson & Nye. With the move to Bloomfield seven years later, they renamed the business to Nye & Company (Auctioneers, Appraisers, Antiques). The firm is nationwide, but the vast bulk of the business comes from trusts and estates in the Tri-State area.
For more information, visit www.nyeandcompany.com. 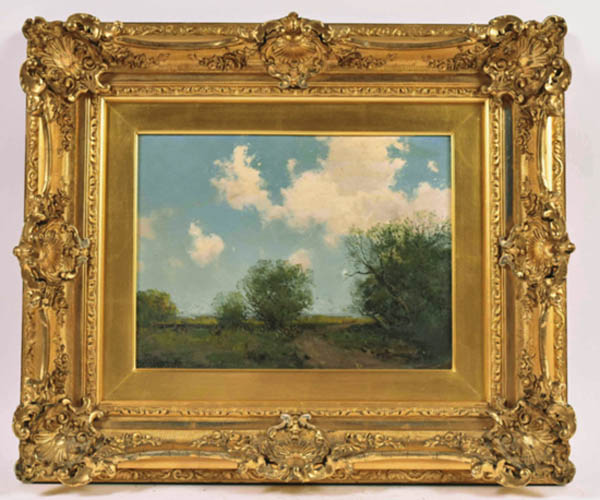