Over 370 Lots Of Chinese And Asian Banknotes, Scripophily And Coins Will Be Sold By Archives International Auctions On Jan. 10

More than 370 lots of rare and highly collectible Chinese and Asian banknotes, coins and scripophily (stock and bond certificates) will be sold at public auction on Saturday, Jan. 10, by Archives International Auctions (based in Fort Lee, N.J.). The sale will take place in Hong Kong, at no earlier than 5 p.m. Hong Kong local time.
The sale will feature live gallery bidding, phone, absentee and live Internet bidding. Previews in the U.S. are by appointment only. Viewing in Hong Kong begins on Wednesday, Jan. 7, and runs through Friday, Jan. 9, at the offices of Kelleher & Rogers, Fine Asian Auctions, one of Hong Kong's premier philatelic auction houses. Check the Archives International website for viewing times.
"We're very excited to be going back to Hong Kong so soon after our September auction," said Dr. Robert Schwartz, president of Archives International Auctions. "Collectors, investors and dealers have been aggressively pursuing fairly estimated properties offered without unrealistic reserves. We anticipate that this auction will please the beginning to advanced collector or dealer," said Schwartz.
Featured lots will include two discovery notes, both possible one-of-a-kinds: a 1907 Deutsch-Asiatische Bank, Peking Branch, $1 banknote in issued condition previously only known as a specimen and a 1948, Mercantile Bank of India (Hong Kong issue) $500 specimen banknote, PMG graded Choice Uncirculated 64, with none graded previously or offered at auction before.
The auction will also include 47 lots of Chinese and Asian scripophily, with highlights including a Deutsch-Asiatische Bank, 1900, 1000 Shanghai-Taels rarity; a Republic of China, 1919 note (reissued, with 1939 coupons added) by ABNC; numerous 1913 reorganization bonds from different issuers and denominations; and many other interesting and scarce scripophily items.
The more than 250 lots of rare and desirable banknotes will begin with a 1972-88 Government of Brunei 1 Ringgit color trial specimen tied with just one other as the finest known in the PMG census, a Ming Dynasty circulating note (circa 1368-99) in very fine condition and the earliest paper money issue available to collectors, and five different Ch'ing Banknotes (circa 1854-59).
There will be numerous lots offered from the Bank of China, Bank of Communications and the Central Bank of China, from hard-to-find individual rarities to large group lots; an outstanding Hunan Government Bank 1906 error (saying 5 "Teals" instead of the correct spelling "Taels"); and provincial bank offerings, represented by more than 30 lots, including many desirable notes.
Chinese military-related notes will also be in the auction. An example is a 1936 $10 Chung Hwa Republic military issue. Hong Kong will also be represented with more than 25 lots, including a Mercantile Bank of India 1948 $500 high grade specimen. Additional banknotes will be offered from Japan, Malaya, Indonesia, Macau and other countries representing multiple continents.
Over 60 lots of Chinese and Asian coins will include China (Empire and Republic issues), Hong Kong, Japan and the Straits Settlements. Highlights will include a 1932 "Birds over Junk" in AU condition; group lots of China and Japan from an old, lifetime collection, "The Hamtramck Collection," assembled from the 1940s to the 1980s by a U.S. Army officer during his travels around the world; and an old Connecticut estate that has been off the market for over 30 years.
The catalog is presently online at Archives International Auctions' website and can be viewed through the firm's live bidding platform or as a virtual catalog or a downloadable PDF.
To learn more about Archives International Auctions and the upcoming Jan. 10 auction in Hong Kong or their upcoming 2015 auction schedule, call 201-944-4800 or visit www.ArchivesInternational.com. 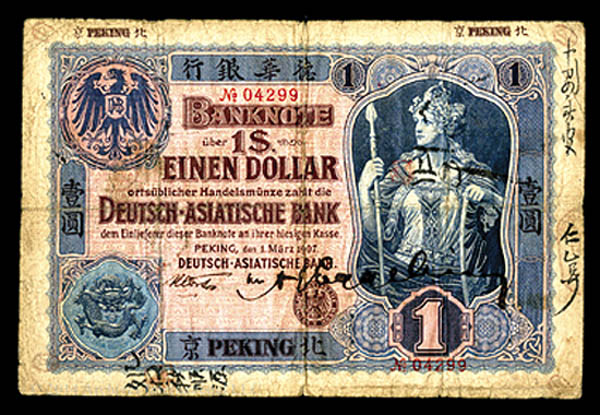