Paper doll booklets of film actors and actresses were first printed in the 1930s. They have enjoyed great popularity with little girls ever since and with collectors for nearly as long. However, interest in them has increased since the 1970s.
Such booklets averaged about 8-by-14 inches, or slightly smaller. Dolls of the famous person or people were drawn on the cardboard covers, along with perforations for easy punching out. Each booklet had four or six pages of clothing and accessories for quick clipping with a pair of scissors. Topping all this, everything was printed in sharp, bright and happy colors.
The companies involved in the publishing and marketing of paper doll booklets were Saalfield, Whitman, Merrill, Artcraft, Lowe, Gabriel and Dennison, all of them notable names in other book and paper novelty collecting fields.
They were sold by all sorts of retailers, including five-and-dimes, department stores, variety and pharmacy shops.
The heyday of paper doll booklets of film and television stars was from the 1930s to the 50s. They were a joy to every little girl and were so inexpensive that indulgent parents, grandparents and other relatives frequently bought them as surprise gifts.
Because of Americas obsession with the silver screen, booklets featuring Hollywoods actresses were early favorites, as well as those based on some actors, such as Edgar Bergens Charlie McCarthy and other rascals. A generation later, television stars and programs became best sellers.
One of the first paper doll booklets about the movies was Little Women in 1934, based on the cinematic blockbuster, starring Katherine Hepburn, of the previous year. In 1940, Gone With the Wind and Deanna Durbin were two of the many attractive offerings. Eventually, as interest mushroomed and sales went through the roof, nearly every important, and some not so important, actresses, along with many male actors, ended up as paper doll subjects. A few top motion pictures became the focus of booklets, as well.
Most collectors consider the 1940s as the best years for movie star paper doll booklets, a sort of Golden Age for the cinema topic. For a dime, a child could have her choice of Alice Faye, Dorothy Lamour, Betty Grable, Lucille Ball, Blondie, Judy Garland, Jane Withers, Greer Garson, Rita Hayworth, Hedy Lamarr, Carmen Miranda, Margaret OBrien, Gene Tierney or any other glamorous star of the movies.
Shirley Temple, Americas all-time favorite child actress of the movies, starred as the subject of paper doll booklets more often than anyone else, adult or child. The first was published in 1934 by Saalfield and it was followed by one or more new titles every year until 1942, when a teenage Shirley Temple had lost more of her appeal with audiences. Publication resumed about 10 years later and continued for the next three or four decades, with most of the editions being simply reprints of early works. The original Shirley Temple paper doll booklet, along with Gone With the Wind and certain vintage Disney items, are among the most expensive to be found today.
When television came along around 1950, it slowly brought about a change. Now television stars, as well as Hollywood legends, were immortalized by paper doll booklets. By the next decade, the TV theme began replacing motion pictures and its stars. I Love Lucy titles, the first two released in 1953, enjoyed great popularity. Other early television booklets, such as Gale Storm of My Little Margie (1958), June and Stu Erwin (1954), and Mary Hartline (1953) were a few of the many that made cash registers ring merrily. Youngsters loved them. Any today, collectors do too.
Titles drawn from the many Disney animated features of the last 75-plus years are highly collectable. Though not celebrities in the strictest sense of the word, they are famous faces. The characters created by Walt Disneys legendary studio have become household names, and most paper doll collectors include them under the category of cinema people. The Three Little Pigs (1933) and Snow White and the Seven Dwarfs (1938) led the way, followed by Pinocchio (1939), Fantasia (1940) and The Sword in the Stone (1963). In 1971 came Bedknobs and Broomsticks, a regular film, and then later The Little Mermaid and Beauty and the Beast.
Like all collectible playthings, be it a toy or a paper novelty, condition and completeness is all important. If the doll or inside clothing illustrations have been cut out or missing, then the price drops 50 to 80 percent depending upon how much cutting has been done or what is missing. Uncut, undamaged, near-mint condition is the goal of hobbyists and brings the highest values.
Paper dolls of cinema and television stars continues to fascinate both film memorabilia and novelty ephemera collectors, and these old booklets of long ago actresses and actors are yet another way to always remember them. 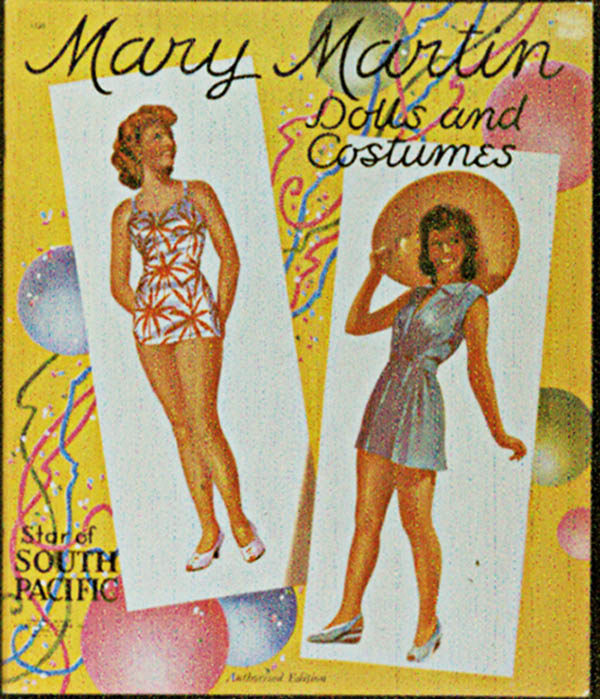