Part One Of Premier Schroeder Toy And Bank Collection Rings The Register At $3.1 Million

The excitement level leading up to Bertoias $3.1 million sale of the Aaron and Abby Schroeder mechanical bank and toy collection was already starting to build shortly after the Christmas holidays. As early as January, antique toy enthusiasts who knew of the collections reputation were calling to make appointments for private previews at Bertoias New Jersey gallery. Some who were especially determined to attend the sale in person staked their claims for a coveted seat at the live event, held March 5 and 6.
It was the first time we were able to open the gallery to a live audience since the pandemic began. With proper social distancing, only 17 people were allowed inside, and as we had expected, there was a waitlist for seats. We did everything we could to accommodate all bidders, with two online bidding platforms and 13 phone lines in place, said Michael Bertoia, president of Bertoia Auctions.
Prior to the event, Bertoia had described the quality, rarity and importance of the Schroeder collection as being on par with those of Donald Kaufman, Max Berry, Dick Claus and the Perelman Museum. If there were an antique toy hall of fame, those legendary collections would occupy the highest echelons, explained Bertoia.
The late songwriter/music industry mogul Aaron Schroeder (1926-2009) and his wife and business partner of 49 years, Abby Steinberg Schroeder, wielded influence and garnered worldwide respect both in business and philanthropy, just as they did in the sociable world of antique toy collecting, for which they both had a great passion.
Abby was present for the entire sale, along with her Yorkshire terrier Pitou. Saying goodbye to the collection was bittersweet for Abby, but she was genuinely delighted to greet auction guests and to see for herself how ecstatic the bidders were with their purchases, said Bertoia.
One of the most highly prized auction acquisitions, a pristine to near-mint J & E Stevens Girl Skipping Rope cast-iron mechanical bank, was the top-selling lot of the entire two-day event. A book example from Blair Whittons 1981 reference titled Clockwork Toys, it had been estimated at $70,000-$100,000 but rose to $156,000, an auction record for the form. Another J & E Stevens bank featured in the Whitton book, a Clown, Harlequin and Columbine, reached $84,000, as did a Stevens Preacher in the Pulpit Bank. The same manufacturers Bread Winners bank in near-mint condition closed at $102,000, while a Bowing Man in Cupola, with vibrant original paint, commanded $72,000. It was followed by a flawless Man in Cupola bank at $66,000.
The Schroeders many exquisite European toys were led by a 25-inch-tall Mohr & Krauss double Ferris wheel with all of its original composition figures. It is one of the most distinctive toys depicted in David Presslands reference The Art of the Tin Toy and was purchased after Aaron and Abby spotted it in a barber shop window in Pennsylvania. Aaron left with a haircut, and I left with a Ferris wheel in my arms, recalled Abby. Conservatively estimated at $10,000-$15,000, the Ferris wheel achieved the second-highest price in the auction, selling to a European collector for $132,000.
Early American toy highlights included a ca. 1906 Carpenter deluxe Burning Building with provenance that includes a descendant of the Carpenter family, $33,600, and a ca. 1880s George Brown painted-tin Monitor clockwork gunboat modeled after the Unions famous Civil War craft, $40,800. One of the most attractive horse-drawn toys in the Schroeder collection, a 33-inch-long Pratt & Letchworth Flying Artillery, appears in Louis Hertzs reference The Toy Collector. In pristine condition, it galloped past its $25,000-$35,000 estimate to rein in a selling price of $66,000.
An Ives bicyclist team in vivid red and yellow paint, one of very few known, went three times over estimate to cross the finish line at $36,000. Another well preserved Ives toy, a tin flatboat with two oarsmen, appears in both the aforementioned Whitton book and Bernard Barenholtzs reference titled American Tin Toys. It glided to $25,200.
Many impressive Schoenhut wooden toys were included in the Schroeder collection, as well. The undisputed grand marshal of the category was a 46-inch horse-drawn Humpty Dumpty Circus Bandwagon with driver and six liveried musician figures. It went to a new owner for $11,400.
Known throughout the antique toy-collecting world as the last of the great old-time collections to come to market, the Schroeder trove has not yet revealed all of its treasures. Bertoia Auctions will host two more sales of toys and banks from the couples holdings, one to take place in September and another in Spring 2022.
For further information, call 856-692-1881 or email toys@bertoiaauctions.com. 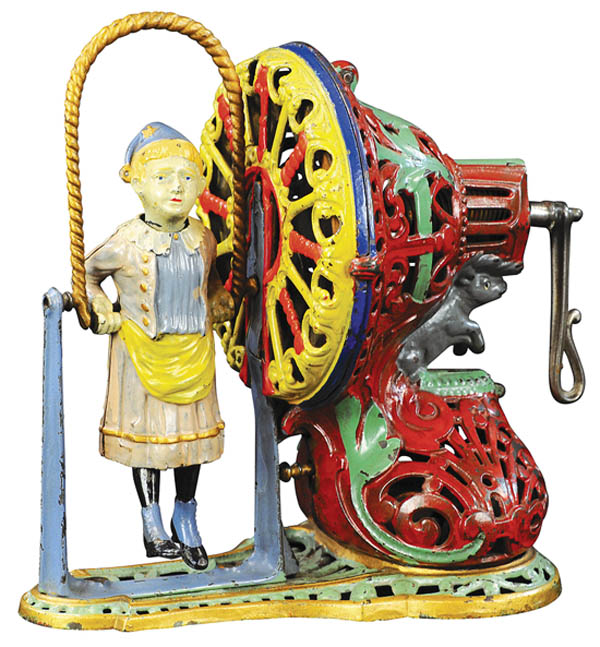