The PA Auctioneers Association (PAA) held a successful conference on May 10 through 13, despite the annual event being pushed from its usual January date. The groups 73rd annual conference did, however, look a bit different, especially without the PA Farm Show hosting its popular auctioneer competition.
There were close to 150 attendees at this conference, showing the dedication of so many members and affiliates of the organization. Being in an association is important, and If you are going to be part of an association, be involved, dont just pay your dues, said past president Jeff Pennington of New Castle.
The PAA is one of the largest auctioneer associations in the country. The membership consists of auctioneers, trade members, and other auction professionals who are passionate about the industry and the auction method of selling. This event included the gathering of these auction professionals, including auctioneers, apprentices, auctioneer students, support personnel, vendors, and presenters.
A well-attended trade show enabled attendees to speak with such vendors as E.R. Munro & Company, All Points Sound, Auction Time/Auction Flex/HiBid, CRS Recycling Services, Greater Giving, Mid Atlantic Community Papers Association, Shipping Saint, United Merchant Processing Assoc., Wavebid, and Proxibid, many of whom were sponsors for the event.
All had access to many educational seminars during the course of the conference that will allow them to better serve their buyers, sellers and the industry as a whole. The PAA focuses on educating the auction professional. Continuing education points were available to the many auctioneers who maintain advanced auctioneer certifications or auctioneer licenses held in other states requiring education. The 13 presenters from around the country offered a wealth of information, including the new PAA Legal Counsel Anthony D. Cox Jr. of Dickie, McCamey & Chilcote, PC; Greg Drake of 360 Tour Designs; Matthew Fridge of auctionpromarketing.com; Larry Oxenham of American Society for Asset Protection; Erik Rasmus of Rasmus Auctions; James Weishedel of HR Enhancement Solutions; and PAA members and specialists Matt Hostetter, Marjorie Hartman, Mike Keller, Patrick Morgan, Jeff Pennington, Jason Reed, and J. Meryl Stoltzfus.
The PAA annually hosts the PA auctioneer competition at the Farm Show Complex during the PA Farm Show, but due to the change in date, it was held at the conference venue of the Sheraton Harrisburg-Hershey. On May 11, Brian Oberholtzer of Reinholds was awarded the overall champion. The runner-up was Brian Burk II of Meshoppen, and the rookie award (licensed for under two years) was Daniel Lee Stoltzfus of Gap. The top female competitor was Kylee Hostetter of Beaver Falls.
Several awards are given out to honor some of those who have dedicated their careers to the industry and who have made the industry better for all. Two auctioneers were inducted into the PAA Hall of Fame. This award is given to an individual based on integrity, honesty, high moral character, acute fairness, and distinction, and is bestowed on an auctioneer each year who, over the course of his or her profession, has committed him or herself to fostering excellence in the industry. The 2021 Hall of Fame inductees were Kerry Pae, originally from Milroy, but now residing out of state, and John Fry of Ephrata.
The recipient of the prestigious award of Auctioneer of the Year was awarded to Mark Ferry of Latrobe. The nominations for this award are chosen by auctioneers in his/her area, and the winner is selected by his/her statewide peers. Ferry has shown excellent leadership, high ethical standards, willingness to share with others, participation in community affairs, and outstanding contributions to the PAA and the auction profession.
Traditionally awarded during the conference but awarded earlier in the year, several auction companies garnered awards in the first-place categories within the PAA Advertising/Marketing Contest, including Hostetter Auctioneers, Kimberly K Auction, Patrick Morgan Auction Services, Lane Ryan Auctions, Max Spann Auctions Co., Dotta Auction Co., Sanford Alderfer Real Estate, Hurley Auctions, Fortna Auctioneers and Alderfer Auction. The "Best of Show" was bestowed on Pook & Pook Inc.
Officers for the Pennsylvania Auctioneers Association for 2021 include Matt Hostetter, president, of Beaver Falls; Jamie Shearer, president-elect, of Downingtown; Lon Clemmer of Harleysville; and Robert A. Ensminger, treasurer, of Harrisburg. Jeff Pennington will serve on the PAA board of directors as the immediate past president. Kimberly K. Douglass of Boyertown is the executive director and magazine editor.
To find a PAA Auctioneer in your area or to find out more about the association, go to www.paauctioneers.org or contact the association at info@paauctioneers.org. 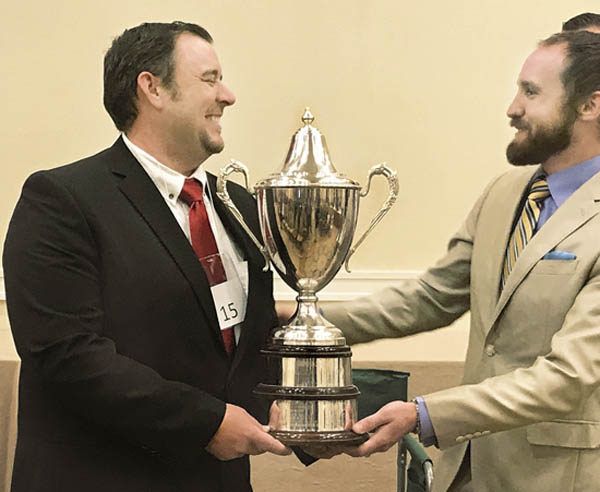