The Dentzel rooster is considered to be among the rarest of carousel figures. Written documentation indicates that between four and six are known to exist. Carved by the Dentzel Company in Philadelphia circa 1895, they are thought to be among the earliest of the Dentzel operation.
The particular rooster being sold at William Bunch Auctions and Appraisals hails from a fire company in Orange, Va. It was purchased in 1977 by Leon Perelman, who offered it to the city of Philadelphia. When the city declined, the original carousel was broken up, and Perelman kept only the rooster and one other figure until his death. This is the first time in roughly 25 years a Dentzel rooster has come to auction. A Dentzel rooster was sold at Sotheby's in 1989 setting a world auction record at the time selling for $148,000. The second, sold in 1991, realized $145,000.
Bunchs original Dentzel rooster will be a feature item on day two of its Monday and Tuesday, April 25 and 26, catalog sale. Bidding will be live in the showroom located in Chadds Ford, Pa., and online through Live Auctioneers and Invaluable. "This is a great opportunity to own one of the rarest pieces of carousel history," said Lee Brouwer, marketing director at William Bunch Auctions and Appraisals. "These figures don't come to market but maybe once in a lifetime."
The expansive two-day catalog auction will have selections of fine art as well as furniture, decorative arts, sterling silver, Asian items and more. An illustrated catalog can be viewed at www.WilliamBunchAuctions.com.
To learn more, call 610-558-1800. 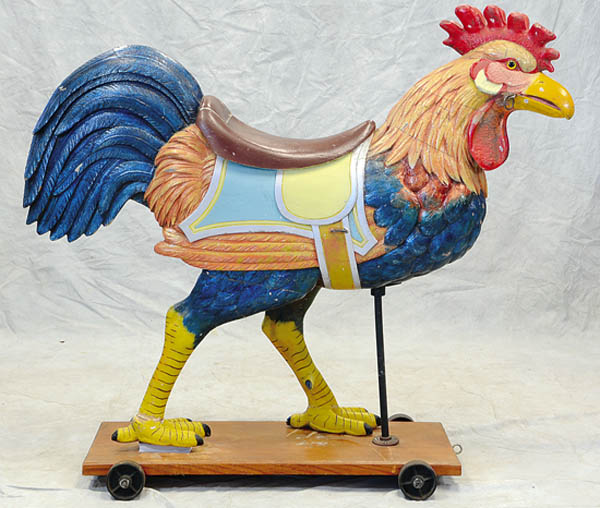