Record prices were shattered in an online-only Spring Comic Book and Toy Auction held April 4 by Bruneau & Co. Auctioneers, based in Cranston, R.I., held along with Altered Reality Entertainment. Three copies of the comic book Tales to Astonish all brought record prices, for a combined $9,500.
The top lot of the auction was a copy of Tales of Suspense #39 (Marvel Comics, March 1963), graded CGC 4.5 out of 10 for condition and featuring the origin and first appearance of Iron Man. The comic book had cream and off-white pages and came housed in a 12.75-by-8-inch CGC case. It went to a determined bidder for $9,250, a record for the book.
The record-setting copies of Marvel Comics Tales to Astonish included Tales to Astonish #27 (January 1962), featuring the first appearance of the Ant-Man, graded CGC 3.5 ($3,875); Tales to Astonish #13 (November 1960), featuring the origin and first appearance of Groot, graded CGC 5.0 ($3,750); and Tales to Astonish #1 (Atlas Comics, January 1959), featuring a Stan Lee story and cover art by Jack Kirby and Christopher Rule, graded CGC 4.0. The book went for $1,875.
The auction was loaded with hundreds of graded rare comic books, generous key book lots, many Marvel and D.C. comics, as well as a collection of tin key wind, friction and battery-op Japanese robots and tin toys, 430 lots in all. Some nice original comic art also came up for bid.
Absolutely phenomenal, that is the only way I can describe this auction, said Bruneau & Co.s Travis Landry. The bidding action for all the major key comic books was intense, with several records being broken. The first Iron Man, Ant-Man and Groot were all show stoppers. The results proved that.
Kevin Bruneau, the president of Bruneau & Co. Auctioneers, added, Even amid a poor global economy and the insidious COVID-19 virus, the pop culture market stood strong. While stocks may be falling, people are investing in other tangible assets. We cant wait for our next auction.
Following are additional highlights from the auction. Internet bidding was facilitated by LiveAuctioneers.com, Invaluable.com, Bidsquare.com and bidLIVE.Bruneauandco.com, plus the mobile app Bruneau & Co. on iTunes or GooglePlay. Phone and absentee bids were also taken. All prices quoted include the buyers premium (20 or 25 percent, depending on the platform).
Illustrator Dan Greens original artwork for the graphic novel Doctor Strange: Into Shamballa was a single panel featuring Dr. Strange in Shamballa, surrounded by wisps of red wind with surreal biomorphic faces towering over him. The ca. 1986 watercolor, with an image size of 13-by-5.25 inches, proved to be the ultimate Dr. Strange collectible. It realized $2,750.
Anything having to do with Spider-Man is a surefire crowd-pleaser. A copy of Marvel Comics Amazing Spider-Man #8 (January 1964), featuring the first cover and appearance of the Living Brain, plus an appearance by the Fantastic Four, graded CGC 2.0, changed hands for $3,240.
Two desirable comic books sailed past their $2,000 high estimates. One was a copy of DC Comics Detective Comics #168 (February 1951), with the first appearance of the Red Hood identity and origin of the Joker, CGC 2.0 ($2,040). The other was a copy of Marvel Comics Incredible Hulk #181 (November 1974), featuring the first full appearance of the Wolverine, CGC 7.0 ($2,400).
To learn more about Bruneau & Co. Auctioneers, visit www.bruneauandco.com. 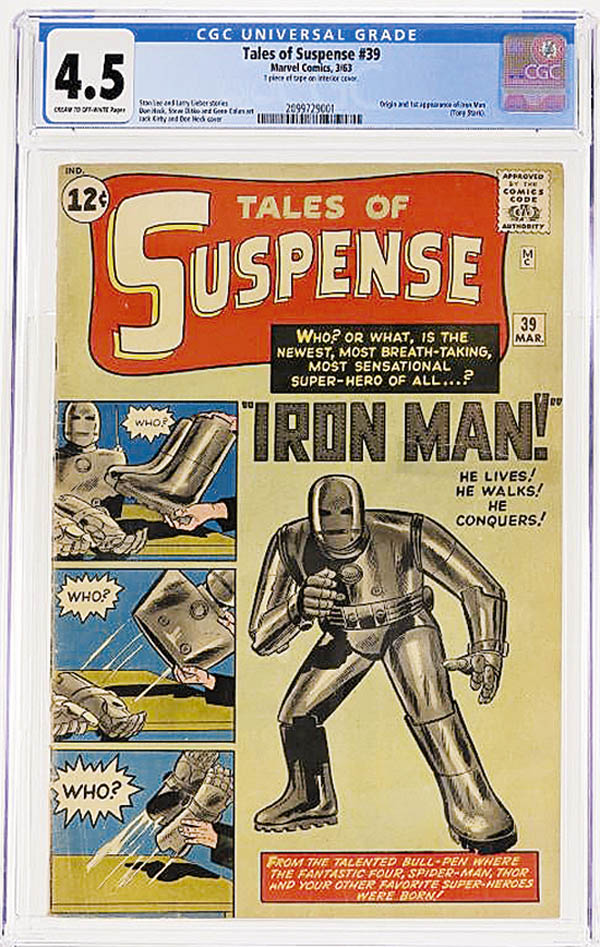