Some bid by phone, while others bid online, absentee or in person in a country-style socially distanced tent setting. But in this period of COVID-19 watchfulness, Dirk Soulis added something new to accommodate safety-conscious bidders at his companys Sept. 19 and 26 Americana Week in Missouri auction series: drive-up bidding.
We set up about a dozen reserved parking spaces around the perimeter of the tent to allow bidders to watch the auction from their vehicles and bid by holding their paddles outside their car windows, said owner/auctioneer Dirk Soulis. Some attendees sat inside their hatchback vehicles with the rear doors opened up. Others pulled in as closely as they could, remained in their front seats, in some cases wearing masks, and monitored the proceedings by tuning to 87.7 on their FM dial. Soulis left no detail to chance, even providing each drive-up bidder with a long-handled bidding paddle crafted from a fly swatter with a numbered bidding card attached. It was a simple concept that worked extremely well, continued Soulis.
The million-dollar double-header held over two consecutive weekends started with the Sept. 19 sale of the Jerry and Cathy Mueller Americana collection. The 30-year assemblage, which had been divided into 250 select lots, was described by Soulis as small but mighty. There had been pre-sale interest in literally every subcategory, with the most inquiries aimed at the collections pie safes, optometrist trade signs, barber poles, and hardware store cabinets. In all, the no-reserve Mueller collection grossed $451,100 against an overall high estimate of $300,000.
The sales top lot was a rare walnut/red paint pie safe, likely of Midwestern origin, decorated with 16 blue-painted punched tins and lettered with the name LINCOLN above crossed flags and floating stars. It sold to a phone bidder for $38,420, four times the high estimate. A Shenandoah Valley (Va.) food or pie safe in old green/blue paint with punched-tin panels in a heart and tulip pattern sold over the phone for $7,910 against a $2,000-$4,000 estimate.
Sixty-five weathervanes were offered, including several very rare forms. A 19th-century full-bodied running-stag copper vane, attributed in the past to J.W. Fiske & Co., was unusual because of its full-stride as opposed to leaping pose. Although seven phone lines were active on the lot, it sold online for $21,470 against an estimate of $3,000-$5,000. Online bidders also claimed two prized three-dimensional zinc lightning rod weathervanes: a ca. 1900 vane in the form of a ram, $12,430 (estimate $250-$350), and a full-bodied beaver on a log with a maple leaf in its mouth, $7,345 (estimate $500-$1,500). The latter was marked W C S, for the W.C. Shinn Co., of Lincoln, Neb.
An eye-catching folk art trade sign depicting a pair of gilded-zinc eyeglasses encircling human eyes was accented by a banner advertising Jeweler & Optician. The sign was originally displayed at the office of L.D. Cutler, an optician in Windsor Locks, Conn. Estimated at $3,000-$5,000, it sold to an auction guest for $12,430.
There was tremendous interest in this collection. It had been highly refined through upgrading over the years and couldnt be topped for condition, said Soulis. Throughout the day, there were 1,100 Internet bidders, 158 telephone bids, 173 absentee bids and 74 guests attending in person in our socially-distanced tent venue. It was a very exciting day for everyone.
Americana Week in Missouri continued with Soulis Sept. 26 sale of the Richard and Valerie Tucker reference-book collection of antique cast-iron shooting gallery targets. Regarded as the ultimate collection of its type, the Tuckers 30-year assemblage of iron as art included many one-of-a-kind and very rare forms from late-19th/early 20th-century arcades. Widely publicized, the sale attracted bidders who drove as long as 14 hours each way to attend, while others flew in from as far away as Boston just to preview the items.
The top lot of the session was the only extant example of a William F. Mangels (Coney Island, N.Y.) cast-iron light-up clown target known as Rowdy. Monumental in size, measuring 26-by-19.5 inches, the target appeared in multiple Mangels catalogs and is depicted in the 2002 book, American Vernacular, by Maresca/Ricco. It sold within estimate for $35,200, which is believed to be a world record price for a shooting gallery target at auction. I can find no record of any results that were even close to it, according to Soulis. Going to a bidder from southern California, Rowdy now resides in Beverly Hills.
Another Mangels production, a 53-inch depiction of a bowlegged cowboy gunfighter known as Shorty, is also featured in American Vernacular. With six phone bidders chasing it, Shorty was one of the auctions hot tickets. It surpassed pre-sale predictions to close at $33,000.
The folky charm of a Mangels iron crocodile with an open jaw, wavy teeth and applied eye target did not slip by unnoticed, despite its relatively modest $6,000-$9,000 estimate. The whimsical reptile, which is pictured in the Tuckers 2014 reference book, Step Right Up! Classic American Target and Arcade Forms, snapped up a winning bid of $23,600.
Two C.W. Parker productions that sold well beyond their estimates included a Whippet, $18,700 (est. $4,000-$6,000), and an animated Owl, $47,700 (est. $7,000-$9,000). A wonderfully detailed early 20th-century H.C. Evans Man in the Moon target, the only one of its type known to exist, rose to $17,700 against an estimate of $6,000-$8,000.
Among the many other items of interest were a rare cast-iron Cardinal on Twig lawn sprinkler, $5,900 (est. $800-$1,200); a lot of eight handpainted miniature sideshow banners, $9,900 (est. $6,000-$7,500); and a large dog-head iron hitching post, $3,400 (est. $1,000-$1,500).
The Sept. 26 session grossed $566,122, bringing the grand total for Americana Week in Missouri to $1,017,216. We were extremely pleased with the results from both sales. The shooting gallery targets brought the most pre-sale inquiries, but we know that many of the bidders were crossover buyers who had also taken part in the Americana sale. We were fortunate that these two exceptional collections worked together so well as a series, stated Soulis.
All prices in this report include the buyers premium, which varied according to the bidding method used by the winning bidder.
For further information, call Dirk Soulis at 816-697-3830 or email Dirk@SoulisAuctions.com.
All images courtesy of Soulis Auctions. 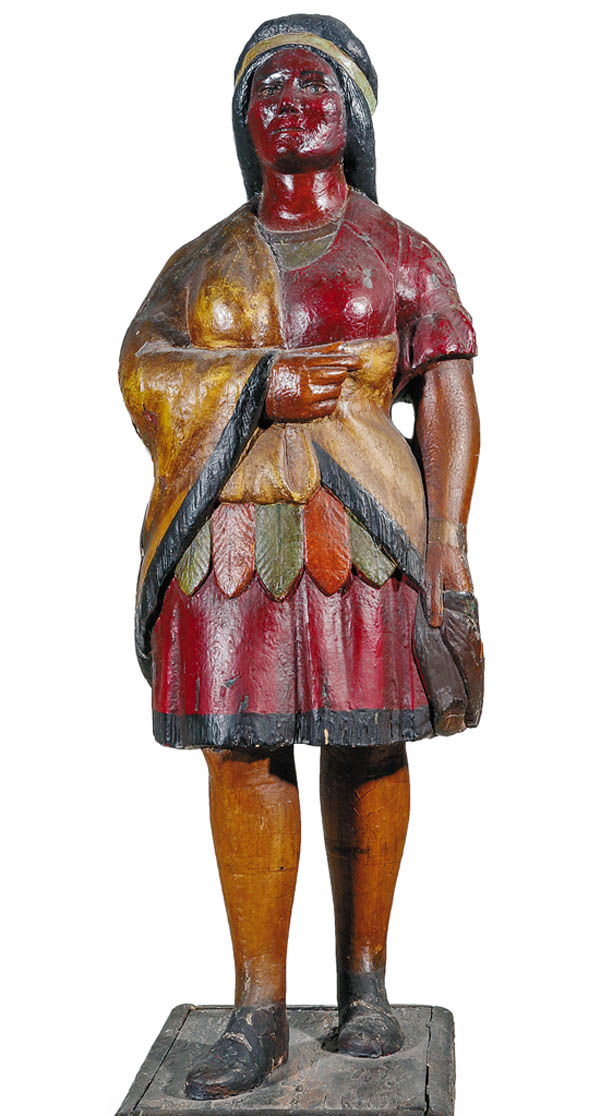