Millers Antiques and Auction Co., based in Hixton, Wis., is known for its high quality advertising sign auctions. But stoneware collectors were the ones who were in for a treat on Jan. 18, when more than 400 pieces were sold at the Monroe County Fairgrounds in Tomah, Wis. The sale primarily consisted of Red Wing advertising jugs and butter crocks, salt glaze and a number of other quality pieces, with some Wisconsin, Iowa and Illinois stoneware sprinkled in.
After speaking with two different collectors from western Wisconsin who were interested in selling their collections, company owner and longtime Red Wing collector Glenn Miller decided the time was right to add his collection to the sale and have one big auction. Miller said the strength of the stoneware market was one of the driving forces for him to sell. More than 100 of the advertising jugs and much of the mid-range salt glaze in the sale came from Miller. Several of the advertising jugs from western states demanded what he thinks are new auction records.
There were roughly 100 pieces that were uncatalogued, but online bidding was offered for the majority of the sale. Other than 5-percent sales tax, there was no buyers premium for in-house bidders; online bidders paid a 15-percent buyers premium on top of the sales price. Everything was sold without reserve.
Attendance wasnt particularly high due to a snowstorm that impacted much of the region, but the right bidders were still in the room either in person or online, so it didnt seem to impact prices realized. Overall, prices were quite strong. Much of the salt glaze sold for midrange to high-end perceived retail values. And, as mentioned earlier, the advertising stoneware was strong, with several of the jugs doing exceptionaly well. There were also some desirable and unique items, such as the front-stamped 20-gallon double flower crock ($24,000) and half-gallon Peter Trucano advertising jug from Lead, S.D. ($5,400).
Other than a couple delays due to the internet, it was a smooth and efficient sale. It was fun to be there and see what certain items were bringing. An added bonus was that Miller provided donuts, snacks, beverages and a pizza lunch, on the house, just like he does with his advertising sign auctions.
Since the auction, another person has approached Miller about consigning a collection, so another stoneware auction is in the works.
A version of this story appeared in the February 2020 Red Wing Collectors Society Newsletter and is reprinted here with permission.
To contact Glenn Miller, call 715-963-1100. 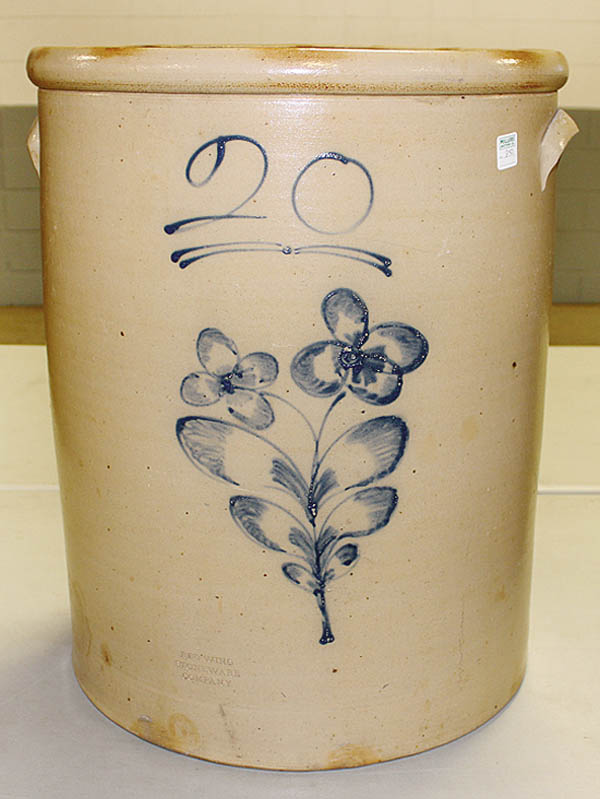