Tiny houses. Youve heard of them, havent you? At just 400 square feet (or less), tiny houses are the standard-bearers for those who advocate living simply. But if youre looking for the original tiny house, youd have to travel back over 100 years, to Council Bluffs, Iowa. Thats where perhaps the very first tiny house was built, to meet the specific needs of Jean and Inez Bregant.
The Bregants were little people. Born into families of average height, Jean Bregant and Inez Lewis embarked on one of the only paths open to those of that era who were just a bit out of the ordinary: a career in vaudeville.
An early reviewer praised Inez as a little queen, bright, intelligent, vivacious and witty. Meanwhile, Austrian-born Jean had been making a name for himself in Europe as a singing comedian, before coming to the United States in 1904.
One of the biggest entertainment draws of the 1900s was Midget City at New Yorks Coney Island. Here, vaudevillian little people posed as typical residents, going about their daily doings in scaled-down surroundings. And Midget City is where Jean and Inez met.
Following their 1905 wedding, the newlyweds continued as performers, eventually moving to Inezs home town of Council Bluffs, Iowa. There, the Bregants gave up show business (for a time, anyway) and settled into their made-to-order tiny house.
Flanked by its towering neighbors, the Bregant house, miniature in size, yet perfectly proportioned, could easily be mistaken for a childs playhouse. Once inside, its quickly evident the residence was designed for the comfort of its original owners. Reach for a light switch or a door knob, and youll find it much lower than expected. (The Bregants were both under 4 feet tall.) The fireplace mantel, shoulder-height in most homes, reaches the waist at the Bregants. In the dining room, a specially constructed buffet/hutch boasts an interior mirror perfectly height-situated for Inez to adjust her hat.
Not every item in the home was Bregant-oriented. While some of the furnishings were built to scale, others were of ordinary size. As Inez noted in a 1959 interview, Some people think I furnish my house entirely with small furniture. I dont. It would be foolish. I do quite a bit of entertaining, and all my friends are of normal size.
The ex-vaudevillians lived contentedly in their custom-made home, running their grocery store, and keeping their hand in with occasional performances at local events. Then came re-discovery.
Council Bluffs candymaker John G. Woodward & Co. was known far and wide for its pure sugar stick candy and real butterscotch. One fateful day, the Bregants stopped by the Woodward factory to replenish their stores candy supplies and encountered Mr. Woodward himself. Impressed by their charming personalities (as well as their show business background), Woodward offered the Bregants yet another new career, as promoters for Woodward Candy.
Billed as the smallest salespeople in the world, the Bregants traveled a 20-state region, captivating crowds with excerpts from their vaudeville act and, of course, selling plenty of candy. The advance ads proclaimed, With each package, they present their souvenir picture. The varied card selection featured visuals of the twosome in various poses and settings, including scenes of them in their just-right-for-us home.
Following Jeans death in 1944, Inez continued to live in the tiny house, sometimes renting it out during her winter sojourns in Florida. In 1950, one renter learned that living in a tiny house can have unexpected consequences: soaking in the Bregant-sized tub (36 long by 19 wide by 19 deep), she got stuck, and wasnt rescued until 60 hours later.
In their heyday, the Bregants were described as cheerful and full of life. Jean Bregant agreed: Its to your advantage to be friendly and wear a smile. A person can find a happier road if hes willing to adapt. For the Bregants, their road proved a happy and fulfilling one.
Photo Restoration by Hank Kuhlmann. Original archival photos courtesy of Preserve Council Bluffs (www.preservecouncilbluffs.org), which continues work on restoration of the Bregant home. 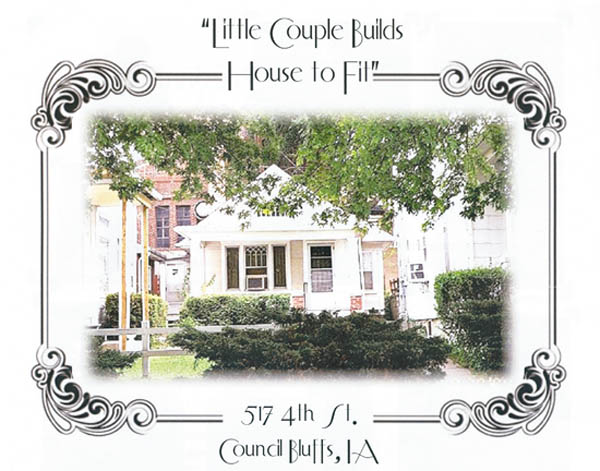