The Lewis And Clark Exposition Of 1905

In 1905, just one short year after the spectacular Louisiana Purchase Exposition (St. Louis), Portland, Oregon, then a modest city of about 160,000 souls, played host to the nation with its own big bash. The main shipper of timer, livestock, grain and all types of produce and daily goods to the region, Portland proudly billed itself as the "gateway to the Pacific Northwest".
"The Lewis and Clark Centennial and American-Pacific Exposition and Oriental Fair," as it was officially called, was not a Worlds Fair in the sense that the 1893 Worlds Columbian and 1901 Pan-American had been. It did not carry the sanction of the international organization.
This was undoubtedly a result of America having had one in St. Louis in 1904 which carried that organizations seal of approval. Subsequently, no foreign nations erected buildings on the fairgrounds, but many, such as Japan and Switzerland, did send exhibits of various sorts. These were displayed primarily in the Foreign Exhibit Building, European Building, and Oriental Exhibits Palace. Of course, a large United States government building complex was approved by Congress and built.
Nevertheless, it was a grand affair. Designed to celebrate the Pacific Northwests 100th anniversary of the exploration of the Ore-gon Country (1804-1805) by Captains Meriwether Lewis and William Clark, it attracted an attendance of 2.1 million paid admissions during its four-and-one-half-month run.
The Expo
Opening day was June 1. Vice President Charles W. Fairbanks delivered the obligatory oration to a disappointing crowd of only 40,000 - bad weather having cut the number to half of what had been expected. The expo ran until October 15 of that year, earning its promoters a small profit of $110,000 - a pleasant but incidental benefit complementing the fairs success in exploiting the resources of the Northwest.
The exposition covered a bit over 400 acres and embraced a natural park and a lake. Admission was 50 cents, but a book of 50 could be purchased for $12.50. For the overly enthusiastic fairgoer, there was a special commutation ticket book of 137, one for each day of the expo. Bargain priced at $20, it worked out to less than 15 cents per day.
Collectibles
While not as prolific as other expositions in mementos, novelties, ephemera and souvenirs, the Lewis and Clark Expo of 1905 of-fers several collecting possibilities. Souvenir tickets, especially for opening day, are popular. These had an illustration of the explorers opening a giant curtain to reveal a panorama of the fairgrounds.
Also attracting attention are statuettes of Sacajawea patterned after her statue at the exposition; replicas of the Forestry Building; badges and pin-back buttons; and such delights as packages of Formosa Oolong Tea, with a Geisha girl illustration, that were handed out at the companys parlors on the fairgrounds.
A softbound booklet, 180 Glimpses of the Exposition, a showcase of photos of the many buildings and other architectural de-lights, offers a good portrayal of the fair. The railroads advertised round rips and other travel arrangements aboard their trains. Special expo booklets containing rates, timetables, accommodation details, and special offers were popular giveaways.
Union Pacifics 80-page publication, for instance, was full of photos and background information, as well as highlights of the im-portant buildings, and "The Trails" many attractions and amusement opportunities. Also found were a compilation of special events, a map of the fairgrounds, and a list of in-town lodgings with their costs (50 cents to $3 per day).
Among the many magazines covering the fair for their readers, Leslies Weekly devoted nearly its entire June 23, 1905 issue to the event. Many other periodicals of the day also reported on the happenings in Portland, though after the giant ballyhoo generated by St. Louis gigantic Louisiana Purchase Exposition of the previous year, interest in such events had somewhat peaked.
Of all the collectibles associated with the Lewis and Clark Exposition, none are more plentiful or moderately priced today than souvenir postcards. More than 18 publishers produced sets or series picturing every aspect of the fair. The biggies were B.B. Rich, the "Official Stationer," and A. Selige Co. Also found by visitors were novelties made of leather, aluminum or wood.
Exhibit sponsors, among them National Cash Register, Singer Sewing Machine Company and Majestic Range, handed out special advertising postcards to visitors at their displays. These are especially prized by todays collectors.
A bit over a century has passed since the business community of Portland put on a grand show to publicize the their region. The event has never been forgotten by the proud people of Portland, nor by collectors lucky enough to have reminders of the 1905 Lewis and Clark Exposition among their treasures. 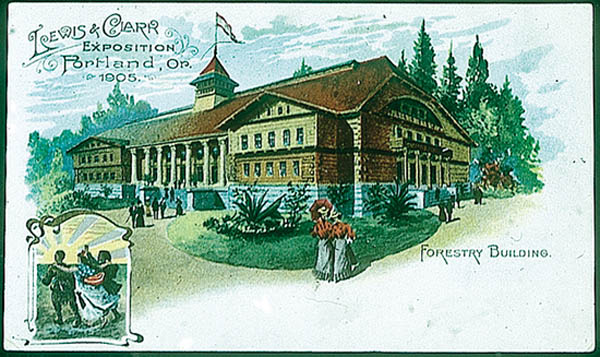