The Brady boys wanted a rowboat.
The Brady girls wanted a sewing machine.
And, in true Brady Bunch fashion, it wasnt long before the whole family, even Tiger the dog, got in on the action. The Bradys had 94 books of Checker Trading Stamps, and those stamps had to be redeemed before the local redemption center closed its doors.
So who won? Well, youll have to wait until the end of this episode. . .er, article. . .to find out.
By 1970, when the Bradys were facing their dilemma, trading stamps were nearing the end of their shelf life. But, like the Bradys, trading stamps live on in pop culture (especially in the minds of those who spent hours sponging or, worse yet, licking, the stamps, then pasting them into savings books).
Ever since their 1891 debut at Schusters Department Store in Milwaukee, Wis., trading stamps traded on the Ebenezer Scrooge in all of us. For every 10 cents spent, you received a stamp, and 1,200 stamps filled a book. With enough books, the sky was the limit: you got something for nothing! In 1956, a Big Boy Barbecue Grill took just 7-1/2 books of S & H Green Stamps. And 1961s Westinghouse Portable Roaster Oven was just 11-3/5 Gold Bond books. A 24-inch Boys Huffy Bicycle set you back 15 Top Value books in 1972. In 1955, Gold Bell offered animal lovers a Thoroughbred Live Cocker Spaniel Puppy for 20 books. And for super-savers, if you amassed 1,000 Top Value books, a 1962 Ford Galaxie 500 Club Victoria with Fordomatic Transmission would soon pull into your driveway!
In 1896, trading stamps really came into their own, when Thomas A. Sperry (who had the idea) and Shelly B. Hutchinson (who had the cash) teamed up to form the S & H Company. Stores bought S & H Green Stamps, then distributed them to customers with each purchase. Customers brought filled books to premium parlors and claimed their prizes. With S & H eventually joined by such regional competitors as Gold Bond and Top Value, trading stamp firms comfortably puttered along toward mid-century. Then, just after WWII, puttered along transformed into zooming forward.
Buoyed by a booming economy, all sorts of stores gave their stamp of approval to trading stamps. Supermarkets. Gas stations. Drug stores, dry cleaners, feed mills, movie theatres, and even the occasional mortuary. By 1957, nearly 250,000 retailers were stamp outlets, and customers stampeded into 1600 redemption centers. By 1964, S & H was redeeming over one billion stamps each week. The company trumpeted that it printed more stamps annually than the U.S. government.
Some non-participating retailers labeled stamp-giving a scam. Sure, the customer got stamps, but didnt that result in higher prices? Court cases were filed, and in most instances the plaintiffs lost. Then in the early 70s, just about the time the Bradys were dithering over a rowboat or a sewing machine, trading stamps took a real licking. The growing popularity of discount stores, such as Target and Kmart, meant that paying more at non-discount retailers just to earn stamps was no longer appealing. Grocery stores dropped prices, then dropped stamps. And 1973s energy crisis stamped out any hope of a trading stamp rejuvenation. Along with free maps and friendly full service, gas stations eliminated trading stamps. Who needed them? It was an incentive-free sellers market. The result: S & H lost a quarter of its business.
Nowadays, most retailers have their own customer loyalty programs. The last S & H grocery outlet, a Tennessee Piggly Wiggly, stamped out its program in 2003. Today, the best place to find trading stamp ephemera is online, or at garage sales; most of it goes for under $20. For a very particular breed of stamp collectors, thats where a catalog of memories lives on.
Oh, about the Bradys: the Bunch compromised and redeemed those 94 books for a groovy color TV!
Photo Associate: Hank Kuhlmann.
All photos are from vintage trading stamp catalogs. 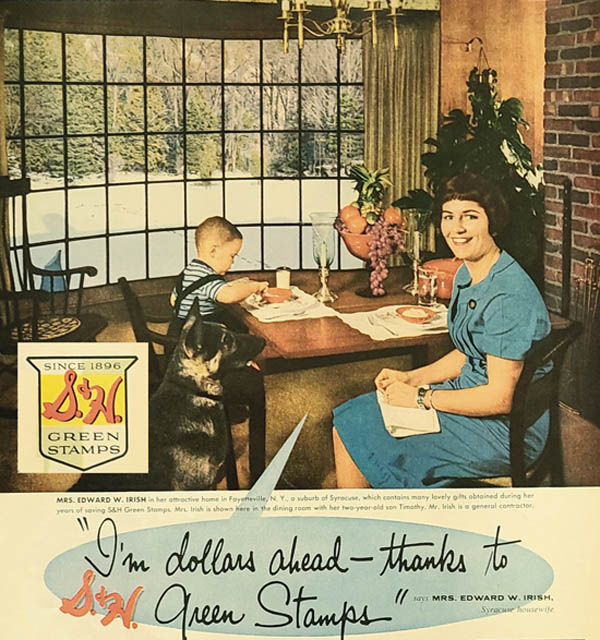