The Train To Disneyland: Archive Of Plans For Walt Disney's Legendary Backyard Railroad Pulls Into Station

Blueprints, Drawings And Renderings For 1950 Carolwood Pacific Railroad To Be Sold By Heritage

Before there was Disneyland, there was Walt Disneys backyard.
There, in the spring of 1950, on the five acres that sprawled across 355 Carolwood Drive in Los Angeles Holmby Hills neighborhood, Disney debuted his first theme park, a rideable railroad in miniature, exact to the last detail. The Carolwood Pacific Railroad, it was called, was 2,615 feet of track upon which Disney, the train conductor, ran his 1/8-scale, 260-pound, coal-fueled, 7.25-inch gauge train, all pulled by the locomotive Lilly Belle, so named for Walts wife, Lillian.
I just needed something to get myself away from things, Disney once said of his decision to create this backyard railyard, the original plans and blueprints for which will serve as the extraordinary centerpiece of Heritage Auctions The Art of the Disney Theme Park and Disney Storybook Art Auction event, which will take place Thursday, Friday, and Saturday, April 8, 9, and 10.
Little wonder that Disney would choose a train as his means of escape, the son of Marceline, Mo., he grew up enamored with the engines and boxcars that ran up and down the Atchison, Topeka, and Santa Fe line near his home. His father, Elias, worked for a time as a railroad machinist and carpenter laying track on the Union Pacific line from Kansas to Colorado. His uncle, Mike Martin, served as an engineer on the Santa Fes accommodation train that ran between Marceline and Fort Madison, of which Walt was so proud he would brag about his uncle to schoolmates.
Disney, too, worked one summer as a news butcher on the Santa Fe line, selling newspapers, fruit, candy and other snacks and amenities to passengers.
I felt very important wearing a neat blue serge uniform with brass buttons, a peaked cap and a shiny badge in my lapel, Disney wrote in the October 1965 issue of Railroad Magazine. As the train rolled into one station after another I stood beside the conductor on the car steps to enjoy the envious stares of youngsters waiting on the platform.
Disneys backyard Carolwood Pacific, with its views of surrounding canyons, may have been miniature, but it was no less real than any life-sized counterpart. Everything about its design and construction was meticulous, from the redwood trestles and rose-garden tunnel to the centralized traffic control board installed in the red barn that served as the Carolwood Pacifics machine shop and headquarters.
Walt's Lilly Belle was a wonderful running engine, said Ollie Johnston, one of Disneys most legendary animators and owner of his own backyard rail line. It had a lot of power.
Emblematic of Disneys approach, the Carolwood Pacific was the result of years worth of scrupulous research and planning by Disney and employees Johnston, Ward Kimball and Roger Broggie, the latter the head machinist at the Walt Disney Studios in Burbank. Every inch of the Lilly Belle, the rolling stock and the rail line is detailed in reams of blueprints and renderings crafted by the colleagues and comrades, the one-day Imagineers Disney called upon to help make his lifelong fantasy a backyard reality. Each page echoes Disneys creative process, with notes, additions, and on-site revisions, many identifiable as by Disney himself and by pioneering Imagineers that would go on from this backyard construction project to turn an orange grove in Anaheim into Disneyland.
So authentic was the endeavor Disney needed Los Angeles city and county officials to sign off on his plans before construction could commence.
I went about it systematically, Disney wrote in Railroad Magazine. After serving an apprenticeship in a machine shop, I studied metalwork and carpentry before I figured I was ready to start building. Then I built a train to one-eighth scale. The engine and the tender combined was seven feet long and operated on coal and water, like the ones I had known as a news butcher. I fashioned all the cars myself. The boxcars were big enough for a person to straddle, and the flatcars could seat two. My special pride was the caboose, which I furnished entirely in miniature, right down to the pot-bellied stove.
Those planning documents, totaling dozens of pages, many of them grand enough for display as standalone works, have for seven decades remained obscured from the publics view. Some might have thought them lost altogether, fragile scrolls turned to dust by age or accident.
Yet they survive intact, every inch and instruction behind this railway that would one day blossom into theme parks around the globe. And now, for the first time, this estimable documentation of history, these blueprints, layouts and renderings of the train that led first to a magical kingdom called Disneyland, have become available.
Acquired by the consignor directly from the family of Roger Broggie more than 30 years ago, this archive has never before been offered to the public. And the timing could not be better, with Disneylands reopening scheduled for Friday, April 30.
This archive is a really special insight into something quite extraordinary, says Jim Lentz, Heritage Auctions director of Animation Art. These pieces are emblematic of the crossroads that Walt created when he created Disneyland, the creative energy and storytelling that comes from his God-given gift as a creator of characters mashed up with the technical knowhow to do the details right or find the people who know how to make magic happen.
For further information, visit www.HA.com. 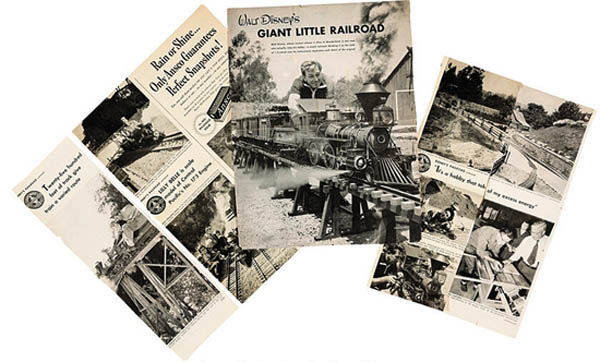