Modern science began 500 years ago, but the surge of change came with the Industrial Revolution. Inventions popped up in every quarter. From the mid-19th century until today, "new" has been everywhere. Whether its commercial, industrial, or retail, products abounded. Even simple and unusual musical instruments which their inventor, Henry Marx, said anyone could play.
Henry Marx had been a barber by trade, but he loved music. He moved from Kansas to California to study music. Although documentation is absent as proof, he claimed to be a concert violinist in the 1890s and we have no reason to doubt him. He was then in his twenties. To make a living he gave music lessons.
Marx studied his students and saw that most quit lessons quickly. Music didnt come easily to most people (it still doesnt). Marx decided that part of the problem was the complexity of instruments, and he decided to invent easy-to-play instruments. And invent he did.
The Pik-Nik, a one-stringed slide guitar, the Hawaiiphone, the Pianolin, the Marx Piano Harp, Banjlin, Mandolinuke, Pianoette, Themola, and Violin-Guitar were all creations of the Marx mind. The best known was the Violin-Uke, a combination of those two instruments, but it looked more like a 12-string guitar without the narrow neck. The instrument could be plucked or bowed.
Marx looked at music, looked at the prosperity of the times, and wanted his piece of the growing economic pie. He moved often, searching for success. With his family at his side, he moved to California then to New Jersey where he sold his instruments door to door. From the late 1890s to the 1920s, Marx went from the Midwest to the West Coast to the East Coast back to Kansas to Missouri to Boston to Chicago and finally settled in Michigan.
In New Troy, Michigan, with the aid of his oldest son, Charles, who had been born in 1896, Marx made instruments in his home. In 1927 the company moved from the house to a factory. Over 100 instruments per week were made. The Marxochime Colony, as the business was called, sold instruments to traveling salesmen.
The salesmen would buy an instrument for the wholesale price of $3 for a Violin-Uke, for example. The salesman hit the road, door to door, farm to farm, selling the instruments for $7.95 to $15.95, what they could get. Farmers were especially good customers. Musical opportunities were limited for children so distanced from towns.
The selling point was the ease of learning. Marx not only invented the instruments, he rewrote music to simple notes. The music sheets were not the usual treble clef and bass clef. These were simple lines of numbers representing notes. And popular songs were offered. Parents saw this presentation as a fine opportunity for their children.
This logic has one flaw. Simple or not, you only gain proficiency on a musical instrument if you practice. To produce a pleasant tone, depressing keys, plucking strings, bowing strings, must be done hour after hour. The Marx instruments ended up in closets, abandoned because no teacher exacted the required discipline to improve skills.
Marx died in 1946. Son Charles continued the business until his death in 1972. In 1988, the Marxochime warehouse was bought by Elderly Instruments. For those 16 years of silence, the warehouse had not been touched. Elderly sold the remaining instruments to collectors interested in unusual pieces of music makers.
Today there is still interest in the Marx inventions. You can still find them in farmhouses. A friend has the one her father bought in the 1930s, box, bow, sheet music, all in first rate condition. She related to me the fact that she never saw the piece until her mother died and she was cleaning out the house. The Violin-Uke was stashed in the back of a closet. This was the common fate of many of Marxs pieces, thus, most are in good condition.
New Troy, Michigan is in Berrien County, where the 1839 courthouse has been transformed into a museum. For more information you can contact them at berrienhistory.org on the Web.
Collectors of any music pieces look for the Marx pieces. Mugwumps, a magazine that covers unusual musical instruments, featured the Marx inventions.
The $3 wholesale Violin-Uke today takes anywhere from $45 to $300, depending on condition. Normally, they run on average $70-$90. The Marx pieces represent American ingenuity that burst forth in the Industrial Revolution and hasnt slowed since. 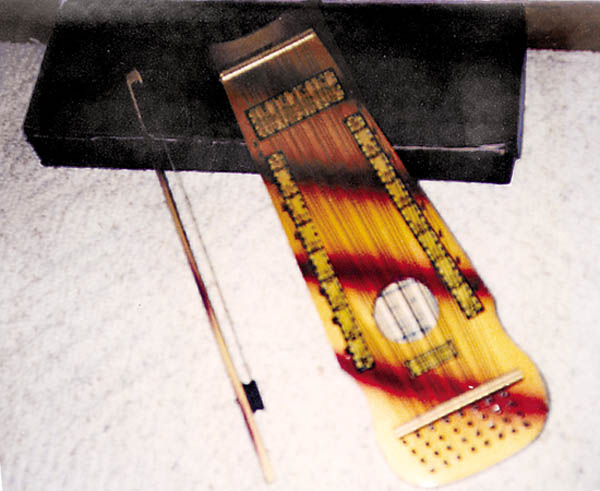