Tobacco Cards Of The 19th Century

Though smoking is certainly hazardous to ones health, collecting the many wonderful pictorial insert cards that once, so long ago in Victorian times, were tucked inside each cigarette pack is both a safe and pleasurable hobby.
Before 1880, Americans hand-rolled their own smokes. But a small number of newly established tobacco companies believed they could change the publics preference away from the traditional to something new: manufactured cigarettes in packs. Allen & Ginter, for instance, were soon selling theirs in small shell-and-slide boxes (10 cigarettes for 5 cents).
Sales boomed!
Soon machinery to roll and package the product replaced agile-fingered ladies working in small, private stalls who had done it by hand. Almost overnight, the American tobacco industry exploded in growth.
By 1899, 2.5 billion cigarettes were being sold yearly. The competition for the consumers nickels and dimes became cutthroat as more and more companies entered the business. As early as 1885, manufacturers like Ginter, Duke and Kimball were stuffing small picture cards into their packs as inducements to buyers.
The many tobacco companies advertised the bounty to be found inside their cigarette packs by furnishing merchants with large, colorful banners. These were displayed in store windows and sizes ran from two to five feet long, with an approximate width of one foot. Pictured on the banners were reproductions of the entire set of cards currently being offered as insert premiums.
Practically all of these pictorial cigarette cards, each measuring a bit less than 3-by-4-inches in size, came in sets of five, 50 or more, thus challenging smokers and others who were saving them to keep buying the same brands, as well as to increase their smoking.
The emergence of the American illustrator as a professional artist of the highest order and technical perfection of color lithography converged to make possible a wonderful array of beautiful cards picturing all aspects of late Victorian life in America during the last two decades of the 19th century.
Tops in popularity were sport heroes of all types, the theater - especially actresses, military, patriotic, famous people of the day, renowned landmarks, American history, and views of the country. In all, there were at least 200 different subjects portrayed on these picture cards. The total number of sets produced is somewhere in the range of 400 to 500, giving collectors a somewhat large hobby field.
Very popular with collectors nowadays are the cigarette silks, which were pictorials on silk rather than thin cardboard stock. These also came one to a pack of cigarettes. Issued sometime around 1915, images to be found were sets of butterflies, bathing beauties, notables, flags, Indians and flowers.
One interesting use of these silks was for young ladies and matrons alike to sew anywhere from 15 to 50, or more, of them together to make decorative textiles for use in making their homes more attractive and colorful. Such silk objects are in great demand now by collectors of several topics, including tobacco cards.
Some of the tobacco companies, such as Allen & Ginter and W. Duke Sons, also gave away albums of heavy stock pages featuring the same illustrations found on a particular set of insert cards. Todays collector is therefore challenged to find not only all the cards to a set, but, if published, the matching souvenir album as well.
By the time the 1890s were coming to a close, the American Tobacco Company, founded by Allen & Ginter, so dominated the industry, selling close to 50 percent of all cigarettes, that aggressive competition had ceased and the use of insert premium cards declined significantly.
They would be revived again, for a brief span of years just prior to World War I and during World War II. But most remarkable of all, the idea was reintroduced in the spring of 2001. Doral Lights cigarettes offered the 50 States Series to Celebrate America Collectors Cards, which they proclaimed was the first set of cards for the 21st century.
Available in select packs of cigarettes for only a short time, the promotion received much criticism. Smoking foes of all kinds, including numerous health groups, were outraged because they considered the cards an attempt by R. J. Reynolds Co. to entice young people into smoking.
The cigarette and chewing tobacco that they once came with have long since gone up in smoke, but the colorful pictorial cards are still with us. They give us a unique series of snapshots of Americas late Victorian age.
Prices for most all old tobacco cards tend to be in the $5 to $25 range, depending upon subject and condition. Collectors strive to put together complete sets of their topic of interest. 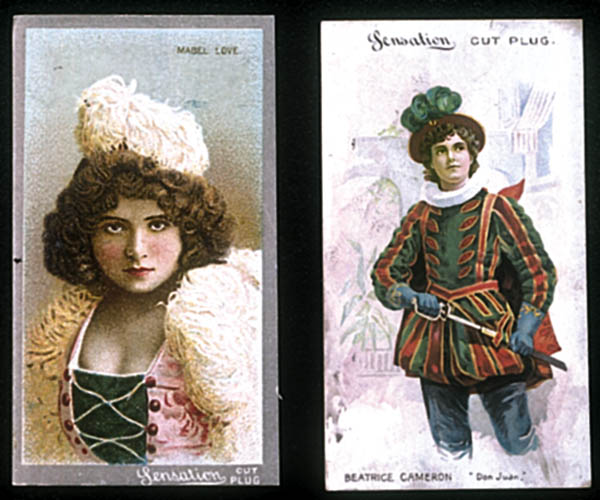