William Shakespeare's First Folio To Be Offered At Christie's

Only Six Complete Copies Are Known In Private Hands

Christies is delighted to announce the auction of William Shakespeares Comedies, Histories, & Tragedies, often referred to as the First Folio, as part of the Exceptional Sale during Classic Week at Christies New York on Friday, April 24 (est. $4,000,000-$6,000,000). The First Folio, bringing together for the first time the collected plays of Shakespeare, ranks as the greatest work of the English language and, indeed, of world literature. Already celebrated on its first publication, it has remained a highly sought-after masterpiece for over four centuries. Only six complete copies are known in private hands. Shakespeares First Folio is being sold on behalf of Mills College in Oakland, Calif. The current auction record for a copy is $6,166,000, set by Christies on Oct. 8, 2001, in New York. It was sold from the library of Abel E. Berland.
The book was published in 1623 by Shakespeares friends and fellow actors, John Heminge and Henry Condell, who collaborated after the writers death to compile this authoritative edition of his work. The First Folio contains 36 of Shakespeares plays, including 18 that may have otherwise been lost forever. Among the rescued works are Macbeth, The Twelfth Night, Measure for Measure, and Julius Caesar. Heminge and Condell also shaped the way the world would read Shakespeares plays by organizing them for the first time into the categories of comedies, tragedies, and histories. The books large size helped elevate the cultural standing of Shakespeare and drama generally, as it assumed an imposing folio format typically reserved at the time for Bibles, theology, and law books.
This sale marks the first time in nearly 20 years that a complete copy of the First Folio has come to auction. It presents a rare opportunity for collectors to acquire a well-preserved and complete copy of this monument to world literature.
To handle a First Folio by William Shakespeare is always a privilege and even, given its tremendous significance and influence around the globe, a humbling experience. This copy is especially exciting as one of the very few complete copies surviving in private hands and knowing that it was once in the hands of the great Shakespeare scholar Edmond Malone, who himself affirmed its completeness already 200 years ago, said Margaret Ford, International Head of Group, Books and Manuscripts, London.
The First Folio was on tour in London and New York City in January and will be in Hong Kong from March 17 to 20, Beijing from April 1 to 3, and back to New York City ahead of the auction on Friday, April 24.
To learn more, visit www.christies.com. 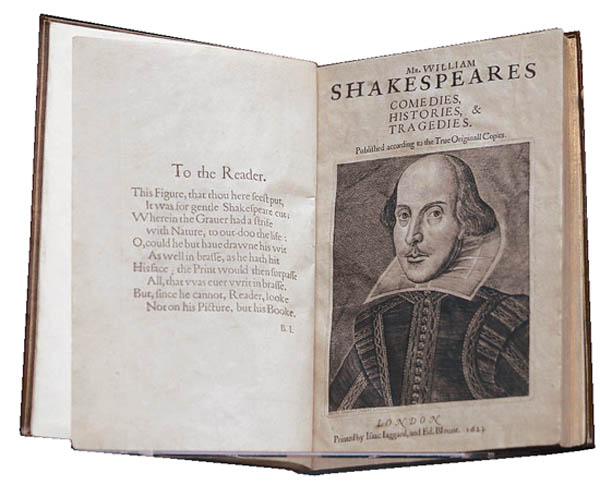