Witman Auctioneers Inc., Manheim, Pa., conducted an auction on Sept. 10, on behalf of Ned and the late Gwen Foltz, at the Reinholds Banquet Hall, along Route 897 in Reinholds, Pa. Ned announced at the beginning of the auction this was the 17th sale Witman has conducted for him and his late wife, and it is likely the final one. An array of country furniture sold along with various antiques. The sale was well attended by both local collectors and dealers. The following are a sample of what sold. Prices include a 10-percent buyers premium.
A nice period red painted Dutch cupboard, ex. Harry Hartman, sold for $3,740. A primitive blue painted canning table sold for $880, and a plain canning cupboard went for $440. An early red painted bucket bench sold for $413, and a tall bookcase grain decorated by Gwen Foltz brought $908.
Some nice contemporary Southern pottery was in the sale, including a Mears Southern pottery jug selling for $396; a Grace Hewell Southern jug, $330; and a Meaders face jug, $275. A religious shadow box from Peru sold for $363, and an antique blue decorated stoneware cake crock, $303.
Folk carving by the late couple Walter and June Gottshall (WJG) has an active collectors market today. A carved Father Christmas figure realized $341, and a WJG chicken with peep carving, $231. A Dierwechter dome lidded wooden painted box sold for $303, and a Thomas Stahl redware pitcher, $303. A Dan and Barbara Strawser (1975) carved man and birds (damage) sold for $286. A Tim Strawser carved rabbit on a lidded glass container went for $220. A green painted primitive shelf sold for $231, and a primitive wooden dough box realized $187.
For additional information, call Witman Auctioneers at 717-665-5735. 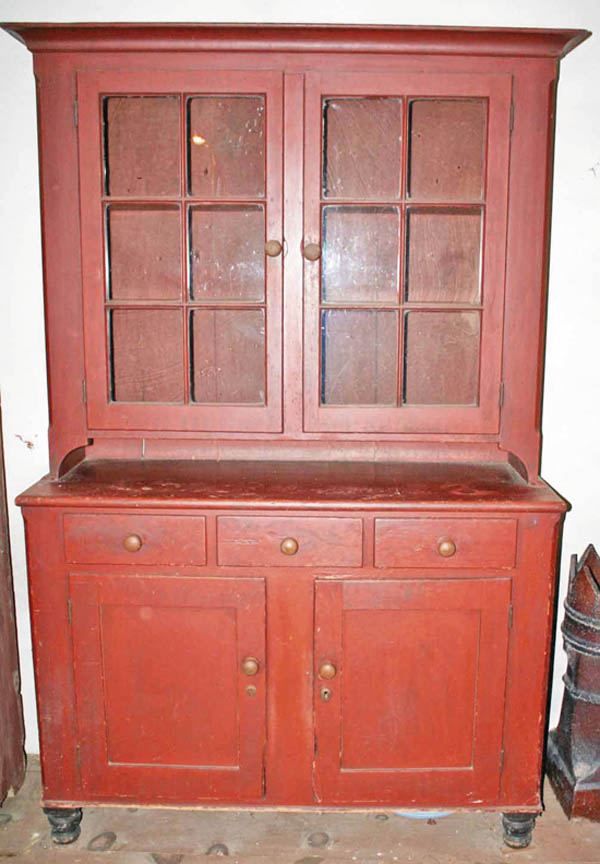