Witman Auctioneers Inc., of Manheim, Pa., conducted a multi-estate auction at Encks Banquet Center at 1461 Lancaster Road, Manheim, on Feb. 29. The father and son team sold several more Zook dioramas and an array of other contemporary folk art and various antiques.
Among the items that did well were folk carvings of Walter and June Gottshall. They were a husband and wife team. Walter (deceased) carved, and June (age 99) painted. The two got their start in the early 1970s and resided in Reinholds, near Galen Hall on the Lancaster/Berks Coounty border. Folk art ran in the family. Antiques dealer and folk painter Hattie Brunner was Walters aunt. His father, Luke Gottshall, who lived on Mechanic Steet in Reinholds, was a quality folk artist, and two of Walter and Junes children were artists: the late David Gottshall did reverse painting on glass, and Barbara Strawser of Schaefferstown is an accomplished painter who holds shows and exhibits work for sale at regional shows. She will be at the Kutztown Folk Festival this summer. The market for WJG carvings has increased over the years and, given auction results, is doing well. A WJG rooster brought $550. A David Gottshall reverse painting on glass of an auction scene sold for $880. A Luke Gottshall wagon with a team of horses pulling a sled of logs sold for $990.
Other items sold included a Manheim National Bank note, bringing $690; a Pintail drake decoy, $470; a Cowden & Wilcox decorated stoneware crock, $305; and a brass locomotive whistle, $250.
Prices reported include a 10 percent buyers premium.
To contact Witman Auctioneers, call 717-665-5735. 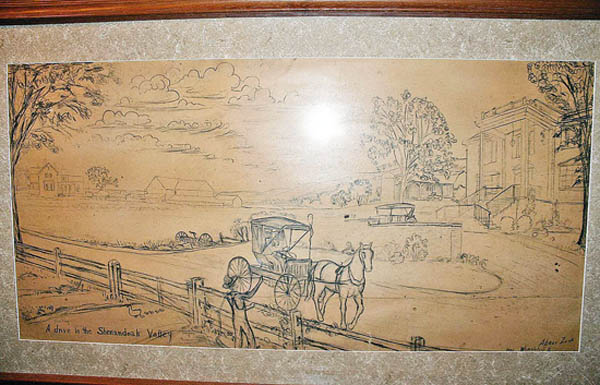