You're A World-Record-Setter, Charlie Brown!

In 1953, Charles Schulz drew portraits of Lucy, Linus, Snoopy, Schroeder, Patty, Violet, Shermy and Good Ol' Charlie Brown for a promotional giveaway. These early iterations of the classic characters set a world record for the highest price paid at auction for original Peanuts artwork during the first session of Heritage Auctions Dec. 11, 12, and 13 Animation Art event.
The drawings Schultz made for The Peanuts Album sold for $288,000. That bests a previous high-water mark set only a month earlier when a Nov. 17, 1950, Peanuts daily strip realized $192,000 during a Heritage Comics and Comic Art sale.
These endearing drawings were made for a newspaper freebie available for the price of a self-addressed stamp envelope and have never been seen in public or available at auction. Instead, the originals have resided with a longtime collector who recently decided to let someone else cherish these lovingly rendered portraits of eight comic-strip characters who have come to feel like family.
We are immensely proud of the opportunity to have brought this historic piece to the marketplace, stated Heritage Auctions Co-Chairman and CEO Steve Ivy. The record price it achieved demonstrates not only its rarity but the significance of Charles Schulz and his Peanuts characters to Americas cultural lexicon. It also stands as testament to one of the most exciting aspects of the auction world, that great discoveries are still being made.
In the portraits, Charlie Brown wears his baseball cap and sports his oversized baseball glove. Lucy skips rope; Linus, without his blanket, stacks blocks; Schroeder plays his piano adorned with a bust of his beloved Beethoven. Violet stands ready to sell her Ready-Mix Mud Pies, while Patty, chewing on her tongue, shoots marbles. Shermy stands with hands in pockets, smiling. And Snoopy rests beside his doghouse to which he has affixed a television antenna.
These eight portraits are quintessential Schulz, "a kind of Holy Grail of his artwork," according to Heritage Auctions Director of Animation Art Jim Lentz. "When I first saw it, I knew instantly it was one of the most important pieces of Schulz art to surface." At the time these Peanuts portraits were made, the cartoonist was only 31 years old.
"The Peanuts Album" itself is remarkably scarce, surfacing only in the pages of Chip Kidd and Geoff Spear's 2015 hardback collection, Only What's Necessary: Charles M. Schulz and the Art of Peanuts, which is full of rare illustrations from the Schulz Museum and Research Center in Santa Rosa, Calif. The book notes that in 1953, fans who wrote to United Feature Syndicate "would receive the two-sides mini-album, which was advertised in newspapers."
For additional information, visit www.HA.com. 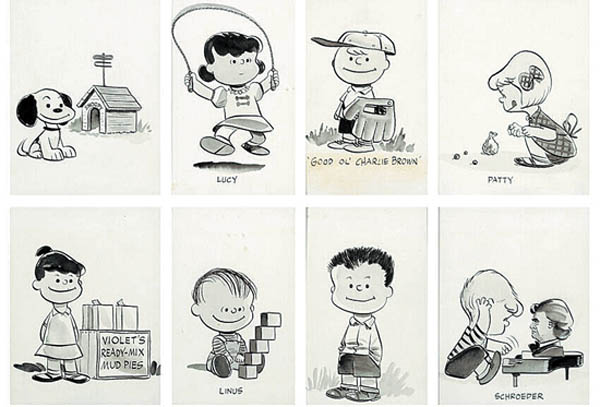