The Brandywine Conservancy is thrilled to announce its release of Hiking Through History, a new informative map that highlights the regions rich history with the American Revolutionary War, overlapping with the areas many cultural, recreational and natural attractions. The maps release coincides with the anniversary of the legendary Battle of Brandywine, fought on Sept. 11, 1777, which marked the first major engagement of the British campaign to capture Philadelphia and the longest single-day battle of the Revolutionary War.
Tracing the entirety of the Philadelphia Campaign of 1777, the Hiking Through History map guides users as they hike, bike, drive and explore the regions Revolutionary War history as it stretches 800 square-miles through Maryland, Delaware, Pennsylvania and New Jersey. Detailing the troop movements and significant events, while also outlining key recreational opportunities found along the way, the map extends from Elkton, Md., where the British landed on Aug. 25, 1777, to the capture of Philadelphia on Sept. 26, 1777, and then northwards to the Valley Forge Encampment on Dec. 19, 1777. Featured along with the troop movements are over 330 miles of regional multi-use trails and greenways, including portions of the 3,000-mile-long East Coast Greenway and the 196-mile Mason-Dixon Trail. More than 25 popular parks and preserves that offer local trails are also included, from interpretive park locations such as the Brandywine Battlefield Park in Chadds Ford to Fort Mifflin in Philadelphia.
The impact of the Philadelphia Campaign of 1777 left an indelible mark on the history and landscape of this region. In particular, the historic lands where the Battle of Brandywine was fought now consist of thousands of acres of preserved open space, publicly accessible trails and parks, as well as farms and residential developments along the Brandywine River in Chester and Delaware Counties. Of those protected open spaces, the Brandywine Conservancy has preserved 500 contiguous acres where some of the fiercest fighting transpired during the Battle of Brandywine, including its recent acquisition of Birmingham Hill, which is currently in the final stages of a master planning process to become the Conservancys first publicly accessible preserve.
With the Hiking Through History map, the Brandywine Conservancy hopes to provide residents and visitors with a unique tool to experience the recreational opportunities in the Brandywine and Delaware Valley regions, while reliving the boots on the ground history of the Philadelphia Campaign of 1777 and enjoying the preserved landscapes that represent an important part of American history. Free copies of the map can be picked up inside the Brandywine River Museum of Arts main lobby entrance in Chadds Ford during normal hours of operation, with additional copies to soon be available at area Visitor Centers once reopened to the public. A PDF download of the map, as well as a link to an interactive online version, can also be found at www.brandywine.org/hiking-through-history.
Hiking Through History is a project of the Brandywine Creek Greenway, a regional planning initiative of the Brandywine Conservancy that envisions a 40-mile-long conservation and recreation corridor from the City of Wilmington, Del., to Honey Brook, Pa. Multiple partners aided the Brandywine Conservancy in the design and development of the map and brochure, including representatives from the Museum of the American Revolution in Philadelphia and the Chester County Planning Commission. Hiking through History was made possible by the generous support of the William Penn Foundation as well as the Greater Wilmington, Chester and Delaware County Convention and Visitors Bureaus.
About the Brandywine Conservancy.
The Brandywine Conservancy protects water, conserves land, and engages communities. The Conservancy uses a multi-faceted approach to conservation. Staff work with private landowners who wish to see their lands protected forever and provide innovative community planning services to municipalities and other governmental agencies. The Conservancy currently holds over 485 conservation and agricultural easements and has facilitated the permanent preservation of more than 66,000 acres of land. The Conservancy is a program of the Brandywine Conservancy & Museum of Art. 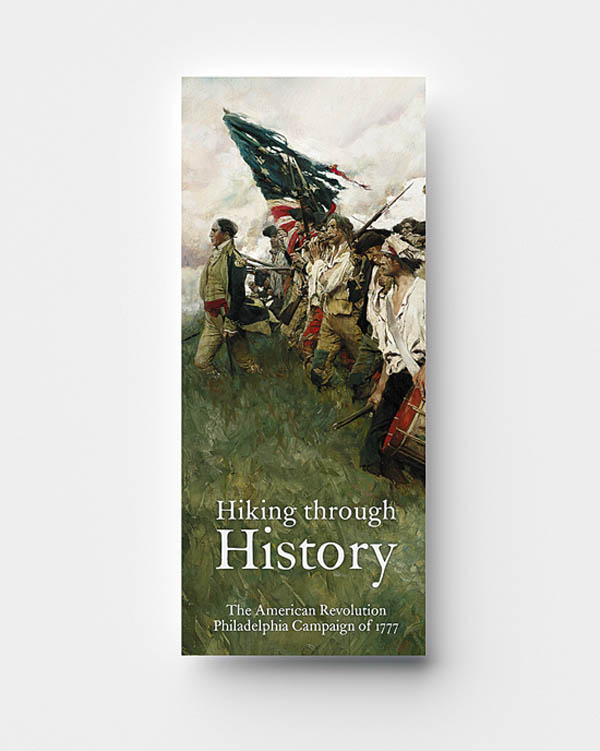