The legendary Ken Fee collection of mostly Western bitters bottles, to include a 150-year-old blue Cassins Grape Brandy Bitters bottle so rare that for years many doubted its very existence, will be sold across two online auctions by American Bottle Auctions in Auction #67. The first will be on Friday, Nov. 29. The second will be on Friday, Jan. 24, 2020.
No one had seen Ken Fees collection of over 300 bottles in probably four decades, said Jeff Wichmann of American Bottle Auctions. It only came to light following his death this past November, and Ive been working with the family ever since to sort through it all. Many of the bottles are outstanding examples that should bring anywhere from a few hundred to many thousands of dollars.
The real prize, Wichmann said, is the Cassins bottle, which he thinks could sell for six figures. There had been some speculation as to where he got it, but we now know he bought it in the 1960s from a fellow named Alan Wilson. Apparently, it was dug in Eureka, Calif., and Wilson bought it from the guy who found it. He then sold it to Ken Fee for the princely sum of one thousand dollars, payable at one hundred dollars a month.
When I first saw it, lying on an old pink towel at the family home in Salt Lake City, I had to do a double take. I didnt really know for sure what I was looking at, Fee once wrote.
Call it sapphire or bluish teal. Look at a photo, and youll be convinced that legends, no matter how long buried, can, in an instant, appear before your very eyes. We do know its the second, more functionally stable variant, with the corners not so ready to burst and every bit as perfect as the day it was made in the late 1860s. Not a scratch on it, said Wichmann.
The Cassins Bitters is arguably the greatest Western bitters blown. Made in San Francisco in 1867 and 68, its shape was meant to resemble a cello. The first variant of the bottle had thin corners, and because of the fragility of the bottle only a couple remain intact today. The second variant eliminated the fragile lines of the bottle, and more of these examples still survive today.
This example, however, is a marvel regardless of age or history, as it is the only example known in this unique blue color. In addition, the bottle is in mint condition with virtually no discernable flaws, a rarity for any bottle this old but especially important for the only blue Cassins known to date. It would be an iconic addition to any collection and is expected to bring $75,000-$100,000.
There are many other rare and important bitters bottles in the Ken Fee collection, such as a Wonsers USA Indian Root Bitters. This unusually shaped early San Francisco bottle in a bright aqua coloration was probably blown between 1871-73. Only a dozen or so aqua examples are known, so they dont come up often, and not in this mint condition. When it comes to strike, color, condition and rarity, it would be hard to top this iconic bottle, (est. $10,000 to $15,000).
The N.B. Jacobs Rosenbaum Bitters is another early San Francisco bitters, ca. 1864-68, variant 2, the smaller size with the Rosenbaum name embossed on it. Its a beautiful yellow with a good amount of green. The top is unusual as they usually had a tapered top with a ring type collar. This example has no taper and, in fact, no ring (est. $3,000-$5,000).
Louis Lacour was fascinated with lighthouses, as is evident in his early San Francisco Bitters Sarsapariphere. One in mint condition in a beautiful green with nice overall crudity will be sold. Lacours have become highly sought after in the current marketplace. Prices have escalated in proportion to desirability (est. $10,000-$20,000).
Henley and his partners had great success selling the oddly named IXL bitters product from 1868-93, in quart bottles. Thats a long time, but many of those were later variants. The early colored example of Henleys Wild Grape Root IXL Bitters was likely made closer to 1868-78. Most were aqua, but this one is an unusual green with crudity, and in mint condition (est. $2,000-$4,000).
Calmers Bitters used the grapes grown around the Sutters Mill, where gold was discovered in California. This rare bottle in mint condition is one of only a dozen known, in the shape of a whiskey blown exclusively in aqua and made from 1872-73. The embossed Sutters Fort on the bottle adds a great amount of appeal (est. $10,000-$20,000).
Catawba Wine Bitters have an embossed cluster of grapes. It is known that Catawba grapes were grown in Ohio, and it is thought these bottles were made for an Ohio market. Some have the graphite pontil, including this one. Collectors love the distinctive embossing and colors they are found in. This example is in pristine condition, with a super drippy top (est. $2,500-$5,000).
American Bottle Auctions has reduced the buyers premium for this auction to 13 percent for everything purchased under $10,000 and a flat 10 percent for everything over that. Many of the bottles in the auction can be seen at the Roseville show in early November (in California). American Bottle Auctions will be at the event.
Standard auction rules will apply. American Bottle Auctions does not do callbacks, rather it has a 10-minute rule that applies to bids at the end of the auction. In essence, every bidder has a last opportunity to make a last winning bid. An online printable color catalog will be available soon, and all of the lots will be photographed and displayed in pictures and a streaming video.
Additional pictures or videos are available on request. Potential customers are encouraged to come by the American Bottle Auction showroom for an in-person look at all the bottles in the sale, although an appointment must be made in advance. To schedule an appointment, call 800-806-7722. The company is based in Sacramento, Calif.
To learn more about American Bottle Auctions, visit www.americanbottle.com. 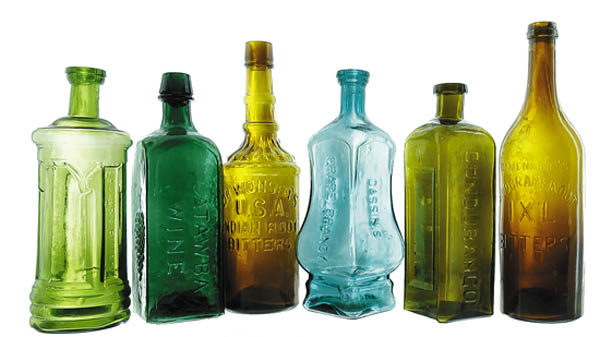